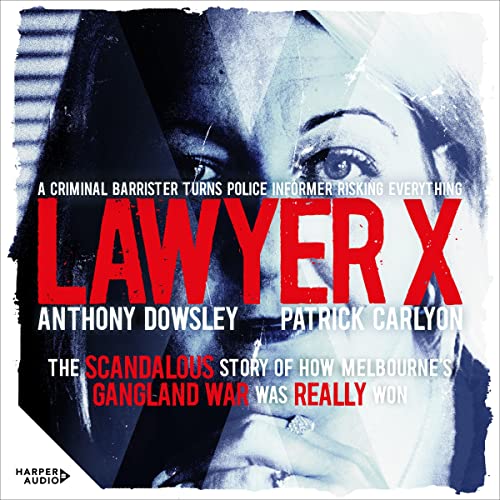 By: Anthony Dowsley,Patrick Carlyon
Narrated by: Abbe Holmes
Try for £0.00

Melbourne's gangland war was an era dominated by murders, stings, hits, drug busts, corruption and greed - inspiring best-selling books and even a popular TV series, Underbelly. It took the police a decade to curtail the violence and bring down criminal kingpins Carl Williams, Tony Mokbel, and their accomplices. When the police finally closed the case file, just how they really won the war, with the help of an unlikely police informer, would become a closely guarded secret and its exposure, the biggest legal scandal of our time.

Lawyer X is the scandalous, true story of how a promising defence barrister from a privileged background broke all the rules - becoming both police informer and her client's lover - sharing their secrets and shaping the gangland war that led to sensational arrests and convictions. The story of how Nicola Gobbo became Lawyer X, and why, is a compelling study in desperation and determination.

Lawyer X is the definitive story of Melbourne's gangland wars and its most glamorous and compelling central character, based on the ground-breaking work of investigative journalists Anthony Dowsley and Patrick Carlyon, who broke the story for the Herald Sun in 2014, and their five-year struggle to reveal the truth about the identity of Lawyer X.

What listeners say about Lawyer X

Great story and very well read, I was left wanting more hopefully they will be a follow up book with more revelations 😋

Am returning this book

As a criminal defence barrister myself, I was really looking forward to reading about this really interesting scenario. I'd listened to the podcast 'Trace. The Informer" and wanted to get more information.

There is a lot of detail in this book, but that's actually the problem. There is SO much detail that the story becomes clunky. It should be a fascinating story but it's told in such a dull way. I don't mean the narration; her narration is fine, aside from some hokey accents at times. I mean the whole story is told in a way that I just switched off. I have over four hours left but I just can't face it!

I was disapppointed with this book.