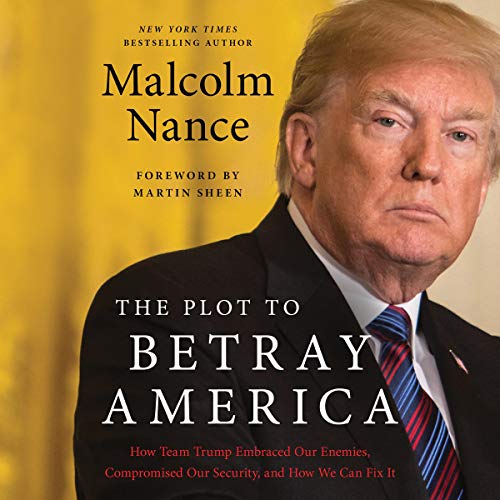 The Plot to Betray America

By: Malcolm Nance
Narrated by: Oliver Wyman
Try for £0.00

An Explosive, Revelatory Assessment of the Greatest Betrayal in American History, Newly Revised and Updated

In The Plot to Betray America, New York Times best-selling author and renowned intelligence expert Malcolm Nance reveals exactly how President Trump and his inner circle conspired, coordinated, communicated, and eventually strategized to commit the greatest acts of treachery in the history of the United States: Compromising the presidential oath of office in exchange for power and personal enrichment.

Seduced by the promises of riches dangled in front of them by Vladimir Putin, the Trump administration eagerly decided to reap the rewards of the plan to put a Kremlin-friendly crony in the Oval Office. Even after his impeachment, Trump continues to defend Putin and jeopardize American intelligence. And instead of interfering, Trump's powerful Republican allies have done everything they can to facilitate Trump's irreparable damage to national security.

Through in-depth research and interviews with intelligence experts and insiders, Nance charts Trump's deep financial ties to Russia through his family's investments-including those of Donald Trump Jr., Ivanka Trump, and Jared Kushner-and exposes the corrupt behavior of Trump's other double-crossing pro-Moscow associates. In doing so, Nance also draws a portrait of a venal and selfish president, one who willingly sells American national security to dictators, strongmen, and the ultra-rich at the expense, and sometimes the lives, of American citizens.

In this newly revised and updated edition, The Plot to Betray America ultimately sketches the blueprint of the Trump administration's conspiracy against our country-and shows us how we can still fight to defend democracy, protect our national security, and save the Constitution.

What listeners say about The Plot to Betray America

Fabulous historic witness of the betrayal of America and eventually the world and humanity, in the name of greed. The gaining of riches that you cannot spend in one lifetime in exchange for all that America holds dear.

Definitely a worthwhile read or listen for anyone who wants to know whats really happening.. A balanced but direct account.

Fiction and should not be taken seriously

Ditched this drivel after only 20 mins. I think Trump will have a defamation case as every accusation towards him has been proven false.
This book is a political hack that bears no resemblance to the truth . The whole premise of the narrative is one of hatred and race baiting that is meant to stir and divide ones soul.
Audible owes me a refund on this one!

This book clearly sets out the many reasons why Donald Trump, should in my opinion be striped of his wealth and incarcerated, he has clearly committed Treason at the highest level purely for the gain of more wealth and power.

Interesting, complete and a bit scary

One sided, but with the weight of evidence and opinion against Trump, I guess it couldn’t be anything else.

I still feel it could have been more balanced as I’d have more confidence in my conclusion, but it is very scary how such an apparently corrupt, certainly childish and vindictive, pseudo mafia boss could have gained more votes than any sitting president in history…

The full story laid out in a way that's clear, easy to follow and with total accuracy.

I like that the Author chose not to Candy coat the going ons with Administration and to revel what the reality of Americans are up against with President Donald Trump . I recommend this book to All of the People to read And take of the blind folder, And un plug your ears this President has sold Your Country And your Freedom.

A warning and realistic accounting

This is no longer Reagan's America. I loved it but felt sad for my country by it!

Everything sticks out and up like a sore index finger as you absorb the truth about the Skullduggary imposed on our Country by a man who shouldn't have ever been elected!

I often wondered how such a liar could last as long as he has and the technique called "the fog of Unknowability" properly executed by someone whose not as stupid as everyone thinks explained everything I needed to know about the aforementioned technique that this administration uses.

I plan on listening to this purchase a second time.

Malcolm Nance delivers another great read with way too much truth for comfort. Just as with his other books, Mr. Nance details the current attack our nation is under.

Excellent View of what Donald Trump has done.

I have read the last three books by Malcomb. He writes of facts bur makes it interesting and you want to continue to find out what happens. I think he should write another and the downfall of Donald Trump. My opinion is he should go to prison for a very long time. I vote on sending him to Gitmo since he hates Cuba. I believe he is worse than any so called terrorist that is currently there. A total traitor to this nation in every sense.

Could not get past Chapter 1.

If you have been keeping up and read political books for detail, you may find this book redundant. I couldn't get past the first chapter which begins with a long treatise on Benedict Arnold.

Malcolm is a cranium cracker!!

Once again Malcolm Nance has shed light on the dark corners of the Trump/Russia saga. For those that have an idea but get lost between the two “truths” of solid journalism and purposeful mis and disinformation, he’s your man. He sounds the alarm (again) and calls us to rise up protect our Democracy from those who would seek to destroy it from the inside out!

The book is much better than the reading. I wish he had done it himself. I have a vision disability but am not blind. Reading is quite slow, so I also purchased the book because the spoken delivery could never be tolerated by a Trump fan. This is my criteria. The problem with the US right now is we simply do not listen to each other. And if your point is made so heavy-handedly, it might be lost on the people who most need to hear it. It actually reminded me of porno. Like you're getting the nastiest words spoken visciously. Just lustfully shoving it in your face, drawing out syllables with resentment -- a 'get a load of this' smugness -- assuring that even the most willing and eager ears would be offended. I was. I am terrified for this democracy, and the guy telling this tale knows the subject intimately. Plus he did his research. I was forced to give myself frequent breaks, not just because the story of how our country is being ripped apart is hard to hear, but because Oliver Wyman's reading is so gratuitous. He was rightfully outraged by the subject matter, and it got away from him. I wish he had on balance used a much more matter-of-fact tone, letting the words speak for themselves, so die hard Republicans would stand a chance at getting the message (I would write more but I don't like the note about comment ownership).

A moving and believable story

This story is beautiful and moving. As the author says in an interview at the end of this audiobook, it lends itself well to being read out loud. It has the feel of a long first person narrative told around a camp fire. It touches on important spiritual questions without being preachy. A lot of suspense, too.

The Betrayer in Chief

Another outstanding work by Mr Nance. His writing should inspire all Americans to be best. Pun intended. These years enduring the infantile behavior of the 45th POTUS has done more harm than any nuclear weapon could have inflicted. We are a divided nation and I sadly do not see it getting any better. On this day, December 13th, 2019, articles of impeachment have been drawn against 45 by the House Committee members of Congress. The GOP led Senate majority leader has said they will work with the WH to make this quick. How can the supposed jury, coordinate with the defendant, before trial for the defendants benefit? Invasion of the Body Snatchers indeed!