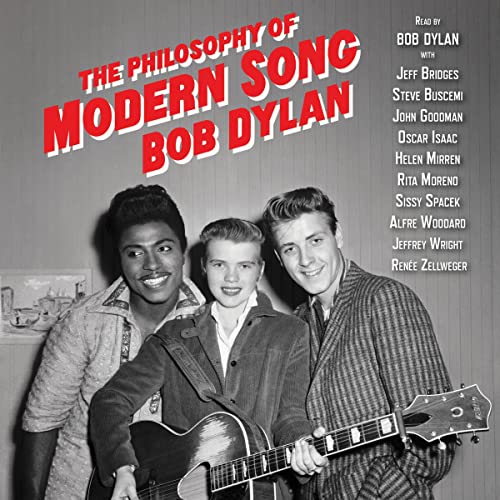 The Philosophy of Modern Song

Dylan, who began working on the book in 2010, offers his extraordinary insight into the nature of popular music. He writes over sixty essays focusing on songs by other artists, spanning from Stephen Foster to Elvis Costello, and in between ranging from Hank Williams to Nina Simone. He analyzes what he calls the trap of easy rhymes, breaks down how the addition of a single syllable can diminish a song, and even explains how bluegrass relates to heavy metal. These essays are written in Dylan’s unique prose. They are mysterious and mercurial, poignant and profound, and often laugh-out-loud funny. And while they are ostensibly about music, they are really meditations and reflections on the human condition. Running throughout the audiobook are a series of dream-like riffs that, taken together, resemble an epic poem and add to the work’s transcendence.

In 2020, with the release of his outstanding album Rough and Rowdy Ways, Dylan became the first artist to have an album hit the Billboard Top 40 in each decade since the 1960s. The Philosophy of Modern Song contains much of what he has learned about his craft in all those years, and like everything that Dylan does, it is a momentous artistic achievement.

What listeners say about The Philosophy of Modern Song

Bob Dylan gives you his takes and wisdom on this great wee listen. End.

a remarkable analysis of modern song

many of the songs were fairly obscure to me being 'before my time ' so to speak but Dylan's and the other artists narration was excellent even without knowing the tracks referred to.

Musings of a master

An entertaining set of poetic reflections on iconic songs from the last century. It's not a book that will teach much about the craft of songwriting, but if you like Dylan's work then him riffing on other popular songs in a very Dylan-esque style is entertaining and occasionally insightful. Well read by an all star cast, and Dylan's own contributions are well delivered, if poorly recorded. I have to assume that everyone else went into a studio, but the man himself was recorded on a dictaphone in his living room, based on the sound quality. If you like Dylan, here's some more. If you don't care, there's nothing here to make you.

Beautiful bridges across a timeless river of souls

Memories of transient moments spent in a collective intimacy of philosophical understanding and lifelong learning.

Fine if you’re a Dylan fan

Mostly self absorbed clap trap with the occasional nugget of interesting information. For fans only.

The finest rock’n’roll footnotes around

One of those books that’s far too dense on detail and poetry for just one listen. Or two.

Outstanding contribution to the history of music

I listened to bob and his collaborators with wrapt attention, aided by a Spotify playlist of the same title. It has been one of my top ten greatest musical experiences - so heartfelt thanks to Dylan - never failing to amaze since I first bumped into him in 1964 !

‘The Philosophy of Modern Song’ is a pretty grandiose title for what is essentially an old man talking about some songs he likes. But that old man happens to be Bob Dylan, so it gets a pass.

There’s some variety here when it comes to songs but don’t go in expecting too much - it’s a lot of bluegrass, folk and country. When scrolling the chapters I was a little disappointed at first not to see anything by any of the Beatles (Brits generally are few and far between) Joni Mitchell or Leonard Cohen - the usual suspects really, but this isn’t really a gripe. You get the sense Dylan picked a number of those cos they reminded him of something else, or gave him a route to talk about a different topic which interested him.
Much of it feels deliberately flippant. There’s no real through ‘narrative’ of 20th century music, no obvious coherent philosophy of song - and that’s completely fine by me.

Smartly, Dylan only narrates the weirder, more rambling and meandering musings on any given song, where he paints a picture of how he’s interpreted the narrative of the song - basically the most ‘Dylanish’ parts. These are always really interesting and often quite funny. They’re also generally in small doses, which is good: his course growling voice, whilst full of character and soul, would be grating to listen to at any length. He’ll then give way to one of the excellent cast - and they are ALL excellent - though Jeff Bridges, John Goodman and Rita Moreno stand out - and suitably varied enough to keep the book feeling brisk.

Overall it’s a really entertaining book, well performed and a real treat to have Dylan himself appear throughout (but not too much) It feels simultaneously like Dylan taking himself far too seriously and also taking the listeners for a ride, and both are extremely fun. Highly recommend for any fans of Bob Dylan, or anyone with an interest in the kind of music and musicians that influenced him.