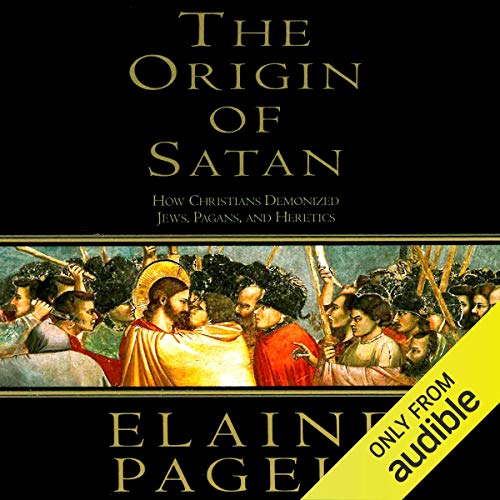 The Origin of Satan

By: Elaine Pagels
Narrated by: Suzanne Toren
Try for £0.00

Who is Satan in the New Testament, and what is the evil that he represents? In this groundbreaking book, Elaine Pagels, Princeton's distinguished historian of religion, traces the evolution of Satan from its origins in the Hebrew Bible, where Satan is at first merely obstructive, to the New Testament, where Satan becomes the Prince of Darkness, the bitter enemy of God and man, evil incarnate. In The Origin of Satan, Pagels shows that the four Christian gospels tell two very different stories. The first is the story of Jesus' moral genius: his lessons of love, forgiveness, and redemption. The second tells of the bitter conflict between the followers of Jesus and their fellow Jews, a conflict in which the writers of the four gospels condemned as creatures of Satan those Jews who refused to worship Jesus as the Messiah. Writing during and just after the Jewish war against Rome, the evangelists invoked Satan to portray their Jewish enemies as God's enemies too. As Pagels then shows, the church later turned this satanic indictment against its Roman enemies, declaring that pagans and infidels were also creatures of Satan, and against its own dissenters, calling them heretics and ascribing their heterodox views to satanic influences.

What listeners say about The Origin of Satan

was hoping/ thinking to learn of how the concept of Satan originated and then evolved. In stead this is more a story of very early Christianity. An interesting enough story which I listened to until the end. Excellent reader.

Satan or not Satan.

The book comes down to one fact. Whether you are Jewish, a Roman who worshipped many Gods or an early Christian. The author takes us for a walk through ancient history to watch a thread develop and evolve. Not quite what I expected from the title but still a fair look at two of the worlds oldest religions.

Good, if a Little Dry.

Audible didn't have any titles that dealt with the genesis and development of the theological idea of Satan through the ages. This title was the closest thing. It deals with the history of how Jews and Christians demonized their enemies using the Biblical imagery as their examples.

There were some real gems here though. My favourite part was actually the biography of Justin Martyr, which was not a central part of the book, but I thought it was beautiful. While I disagree with Justin Marty's conclusions I had to empathize with his search. He was a man just like me living in ancient times in a very different culture, but searching for answers to life.

A great work very well narrated. A must for History of Christian Religion and Gnosticism

Must read for all practicing Christians

I was hesitant to leave a review because I didn’t think I could write objectively about the concept of religion; Christianity in particular. All I can say is this book is a stark reminder of how religion are the scales in which our spiritual eyes are blinded. I wish I had access to this book (or at least a thorough understanding of the history of Christianity) about a decade ago. It would’ve saved me a lot of anguish and unnecessary psychological angst.

Every Christian should read this especially since nowadays Christianity seems to have become a religion touted by bigots, ethnocentrism, xenophobia and hate.

Satan wasn’t always considered evil. There is no hell. And the Holy Spirit (a female spirit) couldn’t possibly have “impregnated” Mary.

The Bible, it seems, is simply an ancient book of telephone.

Looking forward to reading more books by this author.

As a Christian myself, this book challenged many of the concepts I took for granted in my faith. I would definitely recommend this book to anyone who wishes to refine their faith and to look past what is merely tradition.

Traced the occurrences of Satan and similar through Hebrew and Christian writings both biblical and non. Did not presume much foreknowledge so it was clear.

Nice, but not what I was expecting

The title of this book is misleading. It should be called "we demonize the other guys." Best chapter was the one on the Pagans. I listened to the end despite realizing it was not what I was expecting. This would be more of interest to you if you want to hear about the early Christian church.

This book, The Origins of Satan, along with its audible narration, gives a very vivid, very unique mixture of history, scriptural narrative, and personal conjecture that explores the historical and scriptural relationships between Satan, Jesus Christ, and the Jewish people. This production keeps the listener interested and engaged throughout the discourse.

Definitely not what it purports to be. Rather than “the origin of Satan, it’s more like “history of good and bad in the Bible and associated works”. I’m not even sure about the good and bad. It’s mostly a historical work, and I never was sure where she was actually going with it. Not that it’s not interesting in its own right, but it just wasn’t what it said. Perhaps she pulled it together at the end but I didn’t get there because I wasn’t wanting to listen to general biblical history. If it had been a print book perhaps I would have flipped through the pages and seen where we were going and then it would have made more sense? Anyway, not bad just not “the origin of Satan”

This book had a good deal of new information for me, but did not at all explain the "Origin of Satan."

This was well researched. The narrator spoke clearly and with emotion when called. I will keep this book in my library for future listening. Well done.

loved it,very well done,was a pleasure to listen to, will definitely check out more of her books

It should have been called, the history of Jesus and Christianity, guest starring ...satan
5 hours of the birth of one of the most revolting, hypocritical and venomous religions in the world