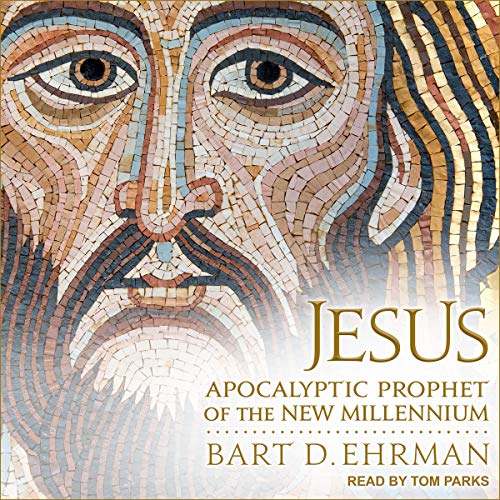 In this highly accessible discussion, Bart Ehrman examines the most recent textual and archaeological sources for the life of Jesus, along with the history of first-century Palestine, drawing a fascinating portrait of the man and his teachings.

Ehrman shows us what historians have long known about the Gospels and the man who stands behind them. Through a careful evaluation of the New Testament (and other surviving sources, including the more recently discovered Gospels of Thomas and Peter), Ehrman proposes that Jesus can be best understood as an apocalyptic prophet - a man convinced that the world would end dramatically within the lifetime of his apostles and that a new kingdom would be created on Earth.

According to Ehrman, Jesus's belief in a coming apocalypse and his expectation of an utter reversal in the world's social organization not only underscores the radicalism of his teachings but also sheds light on both the appeal of his message to society's outcasts and the threat he posed to Jerusalem's established leadership.

What listeners say about Jesus

I’d already read this book in print and enjoyed the audio version too. I had to learn to overlook the odd pronunciation the narrator gives to the title character…Cheesus?! Ignoring this the book is still a welcome addition to my Audible library and I will listen to it again I’m sure. The author clearly expresses sometimes complex issues. Going to revisit or look for more Bart Erhleman.

hard to get past the poor narration

the weird pronunciation of Jesus (cheeSUS) gets very grating after a few chapters.

this is my third Bart Ehrman book. Jesus interrupted and the gospel of Judas, this one isn't on their level. there a lot more speculation here, while it's interesting, is not satisfying. I think I'd rather have a survey of the evidence.

Another fantastic and illuminating read from the incomparable Dr. Bart Ehrman!

To all who the diehard - slightest of true-believers, including, those who consider themselves “open-minded.” (Actually, it’s those who are truly “actively” open-minded would purchase this book to begin with.... nonetheless.)

This book may cause a large amount of “cognitive dissonance.”

Regardless of the undeniable, messy and inconvenient historical evidence. Ehrman argues against the billion+ individuals who live inside the Christian paradigm— notwithstanding, as he states in another book, the very foundation of the entire “western culture.”

So understand your personality type when diving into the real world and scholars like Bart Ehrman.

And remember the intensity of the discomfort is relative to the individual. People who are flexible enough to adjust their thoughts or live with “gray areas” may not have a strong response when they notice the discrepancies. While others may experience it more intensely or frequently if they have a high need for consistency in their lives. (I see those as a broad brush stoke, when lumping people into groups, besides the “high demand conservative religions” it’s goes for the Trump supporters as well, it’s the same personality, again in general! We need to stop the desire to erratic the notion that everything has to be couched in “PC.” Geezzzz-us!)

Also remember why this kind of argument is so hard. 2,000+ years and over 1 billion believers, even the US official holiday is “Christmas.” (Separation of????)

For some it’s just too encompassing of a task. Just the mention of two, social & psychological; might take a life time, if ever to recover. Especially for those, who live in the “South” or “Utah.,” taking just 2 as an example. Those environments have a real cost breaking free from the “undo influence” of the unspoken yet, demanding cultural expectations place upon individuals.

Having said that... and giving away no spoilers (well I did allude to the biggest one, oops).

From the words of the ever so wise and cleaver Bart SIMPON, I publicly would like to, “... JESUS, ALLAH, BUDDHA, I LOVE YOU ALL!” and I THANK YOU ALL, and the Cosmos for BART D. EHRMAN!!

As a longtime Bart Ehrman fan who loves his body of work - which is usually honest to the bone - I have to pick a bone with this one. First a compliment - the reader was much easier to listen to than Bart - with more pleasing and less preachey voice. However brother Ehrman comes across as a humbled employee - who after speaking honestly but painfully in previous books - has been chastened by evangelical Christians - and now has produced an apologetic - to orthodox Christianity - to save his teaching job at the University. Substandard for beloved Bart.

Ehrman distills the St. Nicholas from our culture’s Santa Claus

Paradigm shifting, though entirely consistent with biblical text, Ehrman patiently guides us through what the New Testament actually says about Jesus. His textual analysis approach to understanding scripture should be foundational in Sunday Schools.

This book was a disappointment to listen to. Perhaps it was the scholarly approach....statements were frequently followed by recitations of bible verse origin, something that would've been better as footnotes rather than read in the actual text. This interrupted the flow and made the book tedious to listen to.

Erhman does a great job of separating history and theology while explaining in understandable terms. I found this book thought provoking (in the simplest of terms), a great historical accounting, and a good look at the context of the time and civilization.

Ehrman is a wonderful combination of accessibility and scholarship. His point about what Jesus believed about the imminent end of the world is well taken.

Great book from a great author. Check out his courses also. You can find on Amazon.

Great summation of Ehrman and the historical Jesus

This is a good entry point for anyone interested in the historical Jesus. Ehrman is the foremost scholar on that topic and I’ve read and enjoyed many of his books.

Great introductory text, can get rather repetitive but also heavy concepts so the repetitiveness is necessary. Worth the read or listen.

A Phenomenal Must Read

I had been looking for a time to get questions answered I have always swished around. Raised non-denominational, then to Protestant Baptist, then converted to Roman Catholicism, I questioned differences of interpretations.

This superior writing has not only answered questions but opened my eyes and mind to be able to make my own judgment of beliefs.
The author writes in a way to inform not to criticize. I urge anyone who has questions that need to be answered to listen with an open mind. With all the conspiracy theories I hear myself in this day of time, this novel answers the questions I have always had.