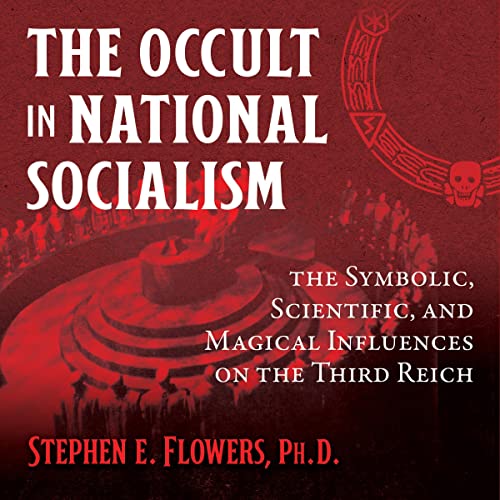 The Occult in National Socialism

• Explains the rites and runology of National Socialism, the occult dimensions of Nazi science, and how many of the sensationalist descriptions of Nazi “Satanic” practices were initiated by Church propaganda after the war

In this comprehensive examination of Nazi occultism, Stephen E. Flowers, Ph.D., offers a critical history and analysis of the occult and esoteric streams of thought active in the Third Reich and the growth of occult Nazism at work in movements today.

Sharing the culmination of five decades of research into primary and secondary sources, many in the original German, Flowers looks at the symbolic, occult, scientific, and magical traditions that became the foundations from which the Nazi movement would grow. He details the influences of Theosophy, Volkism, and the work of the Brothers Grimm as well as the impact of scientific culture of the time. Looking at the early 20th century, he describes the impact of Guido von List, Lanz von Liebenfels, Rudolf von Sebottendorf, Friedrich Hielscher, and others.

Examining the period after the Nazi Party was established in 1919, and more especially after it took power in 1933, Flowers explores the occult influences on key Nazi figures, including Adolf Hitler, Albert Speer, Rudolf Hess, and Heinrich Himmler. He analyzes Hitler’s usually missed references to magical techniques in Mein Kampf, revealing his adoption of occult methods for creating a large body of supporters and shaping the thoughts of the masses. Flowers also explains the rites and runology of National Socialism, the occult dimensions of Nazi science, and the blossoming of Nazi Christianity. Concluding with a look at the modern mythology of Nazi occultism, Flowers critiques postwar Nazi-related literature and unveils the presence of esoteric Nazi myths in modern occult and political circles.

“Much ink has been spilled on the topic of occult Nazism, but this book goes wider and deeper than most previous literature on this subject. It aims, as the author writes, ‘to bring the question of Nazi occultism into sharper focus with a more refined lens of understanding.’ One of the great merits of the book is that Flowers examines not only the question of the actual nature and extent of occult elements in the Nazi movement and its antecedents but also the huge amount of myth and hype that has grown up around the subject since the end of the Second World War. A central theme of the book is the power of myths, including those that ‘lead to misery and destruction,’ as in the case of the Third Reich. This searching book sheds new light on a troubled subject.”—Christopher McIntosh, author of Occult Russia: Pagan, Esoteric, and Mystical Traditions

“Going way beyond the typical sensationalistic tabloid press approach toward the occult undercurrents of National Socialism, as adopted invariably by most authors on the subject for far too many decades, this book is equally a highly welcome counterweight to Nicholas Goodricke-Clarke’s pioneering scholarly study. Himself a well-acknowledged and established occult practitioner as well as an academic scholar, Stephen Flowers deploys the entire arsenal of his critical tradecraft, both emic and etic (in-depth research, shrewd analysis, informed interpretation, historical contextualization, etc.), to present us with a sweeping detailed overview of the contemporary occult and political scene and its eventual culmination in the horrors of World War II and the Holocaust: a sober—and sobering—depiction that is certain to set new standards for coming research well into the foreseeable future.”—Frater U.D., author of Practical Sigil Magic, High Magic, and Living Magic

“Although nothing is ‘easy’ about this book—not its argument, subtleties, or beneath-the-floorboards history—Stephen E. Flowers’s study of Nazism and the occult resounds with vitality and depth; this work must be encountered and reckoned with by anyone who hopes to make a serious consideration of its subject.”—Mitch Horowitz PEN Award-winning author of Occult America and Uncertain Places

What listeners say about The Occult in National Socialism

Some interesting stuff in here and rather detailed. Includes a helpful PDF. The narrators German pronunciation is… glaring.It doesn’t detract too much from what’s being conveyed but it’s rather jarring at times.