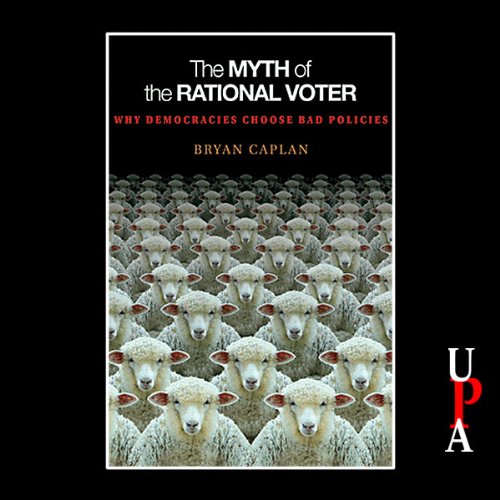 The Myth of the Rational Voter

By: Bryan Caplan
Narrated by: David Drummond
Try for £0.00

The greatest obstacle to sound economic policy is not entrenched special interests or rampant lobbying, but the popular misconceptions, irrational beliefs, and personal biases held by ordinary voters. This is economist Bryan Caplan's sobering assessment in this provocative and eye-opening book.

Caplan argues that voters continually elect politicians who either share their biases or else pretend to, resulting in bad policies winning again and again by popular demand. Boldly calling into question our most basic assumptions about American politics, Caplan contends that democracy fails precisely because it does what voters want. Through an analysis of Americans' voting behavior and opinions on a range of economic issues, he makes the convincing case that noneconomists suffer from four prevailing biases: they underestimate the wisdom of the market mechanism, distrust foreigners, undervalue the benefits of conserving labor, and pessimistically believe the economy is going from bad to worse. Caplan lays out several bold ways to make democratic government work better - for example, urging economic educators to focus on correcting popular misconceptions and reccomending that democracies do less and let markets take up the slack.

The Myth of the Rational Voter takes an unflinching look at how people who vote under the influence of false beliefs ultimately end up with government that delivers lousy results. With the upcoming presidential election season drawing nearer, this thought-provoking book is sure to spark a long-overdue reappraisal of our elective system.

This book is published by Princeton University Press.

"The best political book this year." ( The New York Times)
"Caplan thinks that democracy as it is now practiced cannot be salvaged, and his position is based on a simple observation: 'Democracy is a commons, not a market.'" ( The New Yorker)

What listeners say about The Myth of the Rational Voter

essential reading for anyone interested in the flaws of the Democratic process and how it affects economic policies.
Very efficiently debunks accepted common sense wisdom.

Do voters act in a rational fashion when they cast their ballots? Are they self interested or ideologically driven? Decades of research is strung together in a coherent and compelling story. Well worded and read. Reccomended to anyone interested in politics.

Good book by an author who's willing to depart from conventional wisdom. While democracy is spoken of virtually everywhere else as the only possible governance model for an enlightened nation, Mr. Caplan makes a good argument that democracy as we know it has some very serious flaws.

If you like books by economists, as I do, then you'll like this one. He starts by asking a question that most people would never dare ask, then he logically pursues an answer by examining the incentives created for voters and politicians under a democratic system, how people respond to them and where that leads.

Narrator does a fine job, in my opinion.

Suppose you wanted to wander around the mental landscape of an expert, capitalist, liberal economist. Here it is, you found it. The bedrock is maybe a little more sociopathic in nature than is comfortable, but the crystal clear rivers are pure logic, running around and through and over preconceptions of the forest. Metaphors aside, I was by turns scowling, snorting, raising eyebrows and sighing thoughtfully as I read. There's fascinating ideas here, alongside no small amount of privileged bullshit. If I was of a mind to nitpick, I could also go off about the constant use male pronouns when simply 'people' or something neutral would do. Or references to US citizens as 'Americans' while Mexican citizens are compared as simply 'Mexican'. (How is it so easily forgotten that there are two full continents of Americans? Peruvians are just as American as New Yorkers.) I recommend this book for it's various insights into critical thinking and logic, invaluable tools to be sure, but caution that it's a bit a dry, whimsical, and offensive ride at times. Still, the value of stepping outside one's ideological bubble can't be overstated. Give it a go.

I had high hope's. Like listening to someone reading recipes. I suppose unless this is your field maybe then it would be interesting.

Among other distasteful things in this book, the author clearly subsumes that democracy is embodied in the U.S. constitution. In reality, the word democracy is nowhere found in the constitution! Having said this, Mr. Caplan would no doubt call me a "fundamentalist"; this was a chacterazation that he often used in this book.

I am convinced that Mr. Caplan is an atheist with a distinctive Darwinian humanist world view, and he makes every effort to dispense with the voting public who may have religious beliefs. Beliefs which actually affect their lives - not just their voting decisions. His references to such people are typified with the term "irrational" or "irrational rationality" (if they happen to per chance, vote the "right way").

Instead of revealing the underlying cause for democracy's inherent weaknesses, Mr. Caplan chooses instead to highlight examples of specific voter illogic. In fairness, some of the examples he uses are both interesting and humorous. He nevertheless unfailingly believes that its not the institution of democracy, but the voters who are defective. I am reminded of what Benjamin Franklin said to a woman who asked him what they (those at the Philadelphia convention) had "wrought". He said, a "republic if you can keep it". I will simply say; there is a huge difference between a Democracy and a Republic!

Additionally, David Drummond (if I didn't know otherwise) sounded as if he was the author. If only all audiobooks could be read that way!

Overall the content of the book was interesting and the author does a good job of making his argument. The book is somewhat hindered by being in audio format.

With those complaints in mind, the book is still quite interesting and thought provoking. I still recommend listening to it.

a small shade on failure of democracy

this book put you in a place with the prove of the big failure of democracy. it just dose not work . and if u are wandering how big country pass it legislation and have kinda stable system ? guess what , it because political just buy u words and dont actually do it (lips serves ),of course there is more details about that in the book . anyway the book is lighting . however the author is very materialistic and i hate that so much it just annoyed me i cant believe a man can be that materialise

Not so great in audio format...

The concept of the book is excellent and one that I approached with much interest, being the Anarcho-Capitalist/Libertarian that I am. The book outlines the case for why decisions made in the free market are always more rational, sustainable, and mutually beneficial than ideas made in the electoral process. Unfortunately, it's a bit difficult to follow when you're listening to it as the author throws out a lot of statistics and gets sidetracked easily. It would probably be best read in paperback format.

Very dry and shallow, and made it all the more difficult to listen to this book as opposed to reading it.

Highly reccomend it as a read if you have spare time, but not worth the audio version unless you have a really good attention span.

First few chapters are opinions not paired with facts, next few are factually backed but not very relevant, last third of the book is what I thought the whole book would be.

Fantastic book that really puts an accurate perspective around why and what people are voting for.

The book was written 15 years ago, and I think it went against conventional wisdom.

The author explains and details why he believes voters are irrational such that they’ll elect politicians who conform most to their beliefs, which are in reality systematic biases.

The book is well-researched with lots of data, and overall an interesting read as it makes the reader aware of their own beliefs also.