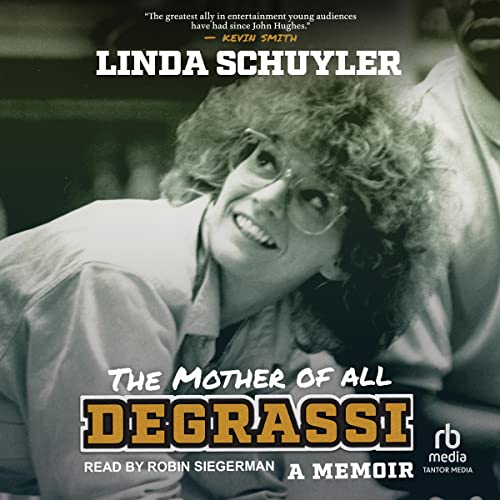 The Mother of All Degrassi

By: Linda Schuyler
Narrated by: Robin Siegerman
Try for £0.00

When a schoolteacher decides to teach her Grade 8 class about filmmaking and creates a documentary that ends up being broadcast internationally, she sets in motion a career of storytelling for an age group largely ignored by TV executives . . . and creates one of the most-loved television franchises of all time

Linda Schuyler, co-creator and executive producer of the long-running Degrassi series, shares her personal stories about the grit and determination necessary to make it as a woman entrepreneur in the bourgeoning independent Canadian television industry of the early 1980s.

After surviving a near-fatal car accident in 1968, Linda found her life continuing to veer in unexpected directions, ultimately leading her to use her innate abilities as an educator to become a successful storyteller and businesswoman.

Linda's deep fondness for teenagers has made her a champion for adolescents. In The Mother of All Degrassi, she shares her strong belief that television is all about the story, and a good story is all about making the political personal. Through anecdotes and introspection, Linda examines her philosophy to dream big, think small, meet life head-on, and always keep an open heart.

What listeners say about The Mother of All Degrassi

Started from the bottom now we here

As a degrassi fan I loved listening to this. So cool to hear background of how everything came about. Listening to this made me feel the need to watch degrassi junior high