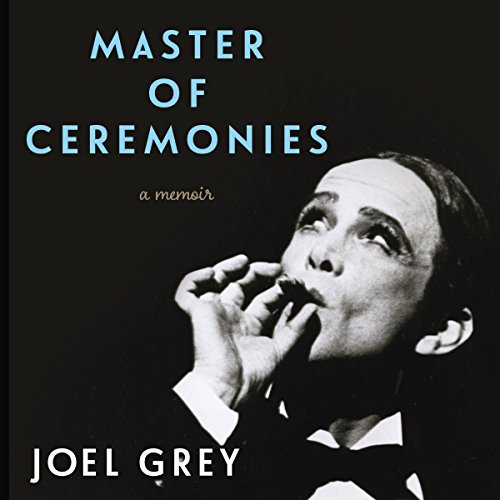 Born Joel David Katz to a wild and wooly Jewish American family in Cleveland, Ohio, in 1932, Joel began his life in the theater at the age of nine, starting in children's theater and then moving to the main stage. He was hooked, and his seven-decades-long career charts the evolution of American entertainment - from Vaudeville performances with his father, Mickey Katz, to the seedy, gangster-filled nightclubs of the '40s, the bright lights of Broadway and dizzying glamour of Hollywood, and juggernaut musicals like Cabaret, Chicago, and Wicked.

Master of Ceremonies is a memoir of a life lived in and out of the limelight, but it is also the story of the man behind the stage makeup. Coming of age in a time when being yourself tended to be not only difficult but also dangerous, Joel had to act both on and off the stage. He spent his high school years sleeping with the girls next door while carrying on a scandalous affair with an older man. Romances with to-die-for Vegas showgirls were balanced with late-night liaisons with like-minded guys until finally Joel fell in love and married a talented and beautiful woman, started a family, and had a pretty much picture-perfect life. But 24 years later, when the marriage dissolved, Joel had to once again find his place in a world that had radically changed.

Drawing back the curtain on a career filled with showstopping numbers, larger-than-life stars, and even singing in the shower with Bjork, Master of Ceremonies is also a portrait of an artist coming to terms with his evolving identity. When an actor plays a character, he has to find out what makes him who he is - his needs, dreams, and fears. It's a difficult thing to do, but sometimes the hardest role in an actor's life is that of himself. Deftly capturing the joy of performing as well as the pain and secrets of an era we have only just started to leave behind, Joel's story is one of love, loss, hard-won honesty, redemption, and success.

"This is an insightful, delightful adult listening experience about someone you may think you know. Surprises abound." ( AudioFile)

What listeners say about Master of Ceremonies

Wow! What a life!

Such an amazing and fascinating story about this wonderful man’s life! So honest and so wonderfully performed - a true talent!

One for his fans only

A moving personal memoir. Mr Grey focused my on his struggles with his sexuality than on his show business life. This is of course his prerogative after all it is his story and he must tell his truth. I would like to have learned more about his professional life and less about his personal sexual issues but that's my problem not his. I applaud his candor his courage and his talent.

Outstanding. Bravo Mr. Grey. If I'd had a nickel for every tear I choked back...

I could identify with much he wrote about growing up Jewish. Plan to listen again

I enjoyed his story so much, that I will cherish this book , always. I always wanted to know about Mr. Joel Grey, and finally, in his own words and not 'hearsay" I was able to get a glimpse of the man behind the legend. So, fortright, and witty. I think he's is extraordinary! Several years ago I read and reread the biography of Montgomery Clift, by Patricia Bronsworth and it was written so well and her research was so thorough, that by the end I was practically in tears. I fell in love with him after that book. This book of course wasn't as tragic as Monty Clift's story. (thank God), but was just as moving. It is a MUST READ!

Joel Grey is a national treasure we do not deserve. I loved every minute of his story.

Wonderful to listen to. Very entertaining!!

What a delightful listening experience. Joel Gray is a pleasure to hear him talk. Bravo.

Story behind the brilliant performances. Well told personal story made interesting by the author's connection to great works and generational talent. A life well lived as well as a tale well told.

The book was jist OK. I'm glad I heard it and glad it's done.

it's in the old style of memoirs that assume that you already knows about these era and the subject. Joel Grey refers to shows and people but doesn't explain the vibe of the era. I never felt like I was there. it's didn't have a story quality. It was more like a summary of events and name dropping.

He loses a point for focusing on his sexuality more than his brilliant career. I feel like he had another book in him that could have provided all of the insights into his career that he seemed to leave out of this book. He was such a wonderful performer. It would have been great to hear about it more.

It's OK, but not what I had hoped

I was not expecting a book in which someone I admired spent the entire time whining about how his mommy didn't love him , having to hide that he was gay yet discussing details of his encounters, only to decide at the end that he sucks at being a gay man and he'd wasted time trying to please his mom. I wanted to hear about his career, his creativity with the roles he played. That seemed to take a back seat to mommy and men. Add to that his somewhat slurred reading and I was thrilled when the book ended. I'm glad this was the free in a 2-for-1 because it would have been a waste of money.