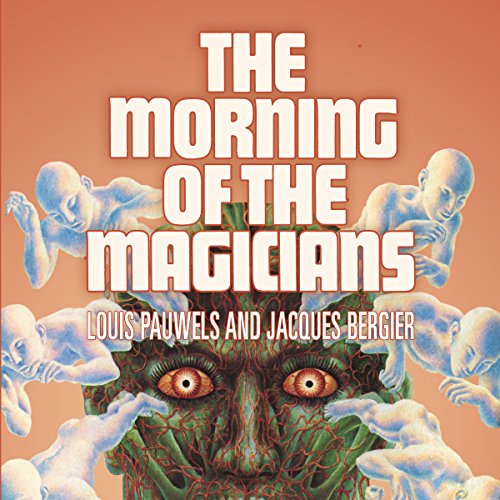 The Morning of the Magicians

By: Jacques Bergier,Louis Pauwels
Narrated by: Clay Lomakayu
Try for £0.00

Can we rediscover the secrets of the alchemists? Was there a previous atomic age? Is humanity evolving toward some kind of superhumanity? Will future governments behave as secret societies?

The questions of a fevered imagination? Not for the two authors who spent six years prospecting in that strange country that lies beyond the frontiers of rational, "scientific" wisdom. They believe it is vital for us to pose these questions and others even more disturbing.

The Morning of the Magicians is a compendium of dark and peculiar true stories - an enthralling introduction to the puzzles of occult knowledge. This classic of the New Age, written by the founders of the "Ancient Astronaut" thesis, featured on TV shows like Ancient Aliens, quickly became a best-seller in many languages and continues to inform us today.

What listeners say about The Morning of the Magicians

morning of the magician

This was very well put together, could hardly put it down chapter after chapter the more I listened the more I wanted to know.

a work of genius

Absolutely incredible. A guidebook for opening the mind to unlimited possibility while keeping ones feet planted on the ground.

I've been reading books on similar subject matter for 2 decades and this is one of the most complete, brilliant works Ive ever found. I want everyone I know to read it.

Also the narration is fantastic. I'd give this 7 stars out of 5 if I could.

There are no truths here, merely arrogant and contradictory conjectures. Magic does not spring from the brain, and this is one of the human brain's most grotesque examples of this that I have witnessed. The complete ignorance of this work is delivered with breathtaking pretentiousness. This book is not even a "work;" it is the narcissistic ramblings of a fool pretending to be knowledgeable and enlightened. At first I laughed at the most obviously ridiculous and intellectually amateurish spewings. In the end, one's intelligence can only endure so much self-torture by voluntarily submitting itself to the most unenlightened and self-important nonsense about metaphysics since the syphilitic death of Aleister Crowley.

The narration here does not match well with the material. The material is that of a foppish Frenchmen with an affected and extremely pretentious posture as a grand old sage. The voice here is of a "New Jersey" car salesman or insurance agent. This voice would be ok for a local Northeastern commercial, but this is not the voice of a pretender who wants to pretentiously convince the world that he knows all of life's great mysteries and holds the keys to magical powers; not by a very long shot.

You will never obtain the answers to life's mysteries nor gain supernatural powers by reading a book. This is a boyhood dream that began with the invention of the book. Before books, ignorant men thought some object could convey this. The daydream is: something will give you power and wisdom that you obviously cannot obtain with what you already possess. You will never gain this unless you were ordained to recieve this, and at that point it will be a mature burden, and not at all like your childish fantasies imagine it to be. You may reach a certain level of enlightenment by many lifetimes of proper application; but you will never get this from a book, a magic oil lamp, a ring, divination paraphernalia, a magical personage, nor a religion.

If you do obtain privileged wisdom, you may occasionally want to read books to see if anyone else exists or has existed at your tier of understanding and being, and has written about it. If so, you will find that to essentially be a dead end, but you may find lesser exceptions. This book will never come close to being one of those lesser exceptions.

I read this book a long time ago. I really liked it. I felt like it opened my mind. However, the audio version was hard to follow and a bit monotonous /boring

didn't like it. I thought it would be interesting and then after listening to it I was extremely bored

I persevered to the end and enjoyed a few chapters, but this was mostly just boring. I'm not sure why it comes so highly recommended but hope others will get more out of it.

The book was very interesting but the narrator was pretty bad. So many mispronounced words.

this book is important for the occult canon, but reader is unlistenable. Bizarre pronunciations, pauses, emphases