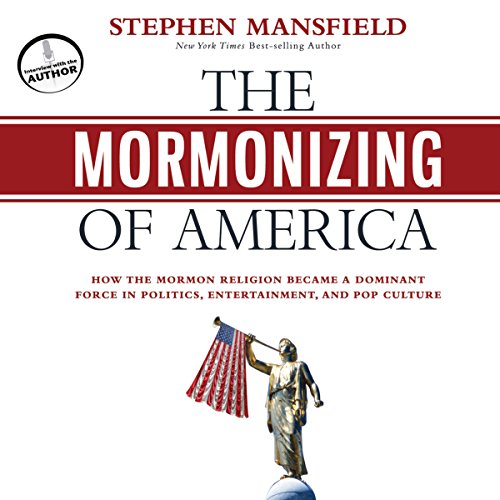 By: Stephen Mansfield
Narrated by: John McLain
Try for £0.00

Stephen Mansfield, the acclaimed New York Times best-selling author, has highlighted the growing popularity of Mormonism—a belief system with cultic roots—and the implications of its critical rise. Mormons are moving into the spotlight in pop culture, politics, sports, and entertainment via presidential candidates like Mitt Romney and Jon Huntsman, media personality Glenn Beck, mega-bestselling Twilight author Stephenie Meyer, and The Book of Mormon, the hottest show on Broadway. Mormonism was once a renegade cult at war with the US Army in the 1800s, but it has now emerged as not only the fastest-growing religion, but as a high-impact mainstream cultural influence.

What listeners say about The Mormonizing of America

A book about Mormons, but not by a Mormon

I don't know much about American Politics, but I suspect that after you've listened to this book, you might be okay with voting for Romney as president. That said, Mansfield's book is not at all a favourable account of Mormonism. He is highly critical of Jonathan Smith, the founder of the religion, but he has a lot of empathy for the members of the Church of the Latter Day Saints.

Mansfield made the book feel very current by placing different scenes from contemporary America and its attitude towards Mormonism between the issues he addresses within the book. His last example indicates that Evangelicals and Mormons could co-exist and even be friends. Yet he makes a plea to Mormons to take history seriously and to be honest about their past. He wants Mormons to change, to become more transparent and open to others, to accept plurality a bit more etc. While Mansfield is probably right, I wondered why only Mormons should change?

The book is about what it its title says "The Mormonizing of America." Mansfield is able to give an overview of the religion while being critical yet positive towards Mormons.

I suspect your political background, your religious stance and your knowledge of who Stephen Mansfield is, will play a big role on how you experience this book. As a non-American, I found it interesting, sometimes a bit sharp and at other times I wondered about a hidden agenda. A worthwhile listen!

John McLain's doesn't bore with his reading and was able to keep my attention throughout.

As a member of the Church of Jesus Christ of latter-day Saints. I probably shouldn't comment on this book, but on the other hand, it's a free country. My initial reason for buying this book was morbid curiosity I originally had thought this book was going to be about politics. However, for the most part it's actually an overlook of the church itself. It does delve into a little bit of here's why the church is good. Here's why church the church is bad, etc. but it takes a pretty objective view and it brings up points I had never thought of. Or even heard of before. I highly recommend this book for anybody who just wants to know about the church without being preached to about the church. Kind of like a text book overview of the entire church that you'd find for a religious college course. On the technical note the author is incredibly engaging and it's fairly easy to just listen to it from start to finish in one go it is pretty entertaining honestly, even when it's brutal.

If you've read Rough Stone Rolling, as I have, 3/4 of this book were a bore.

What was most disappointing about Stephen Mansfield’s story?

It's more a history of the mormon church rather than an expose on how it currently fits into the modern American landscape. I was hoping for the latter.

If you've ever been to Utah or know a lot of Mormons or read Rough Stone Rolling (I have done both), this book is not worth your time.

What would have made The Mormonizing of America better?

Has The Mormonizing of America turned you off from other books in this genre?

What aspect of John McLain’s performance would you have changed?

Nothing. He did fine.

What character would you cut from The Mormonizing of America?

Unfortunate. Mansfield’s title implies he has done some research on the topic. In my opinion, he sadly misses the significance of the so-called ‘Mormon Moment’. He fails to recognize that Latter-day Saints have tried to keep sacred covenants, and with hearts turned to the Lord Jesus Christ, try to bless the lives of others. Mansfield allows his anti-mormon evangelism to get in the way of seeing much of the good highly visible Mormons have accomplished. Instead, he offers minimal, almost incidental glimpses of Mormonism’s contributions to America’s greatness. Mansfield re-cycles old anti-mormon rhetoric and in so doing misses untold opportunities to share the Mormon Experience. Christ said, “Come, follow me.” Today’s active Mormons strive to follow Him and in so doing bless others with the fruits of the Gospel of Jesus Christ. The Mormonizing of America fails to deliver any new insights into the contributions these good people make to our society.

For as much “research” as Mansfield has said he’s done he doesn’t know as much as he thinks. Even just listening to his interview I’ve noticed he’s been wrong with facts regarding the Mormons.

Rather deceiving title and irritating narration

Full disclosure: I am an active Mormon. But I like hearing other views and seeing the "other point of view." So the idea of this book sounded appealing. However, after a few hours of the narrator I'd had enough. I could possibly consider reading the book on my own but listening is too much. The narrator has a way of sounding condescending and incredulous. It's one thing to not share certain beliefs but it's another thing to emphasize certain words in a way that is almost offensive for someone who does believe. And in many instances it is just unnecessary. Furthermore, the title is deceiving. It made me feel that this book was going to be about how Mormons have influenced society, spread into different industries in positions of significance, how mormons were so poorly mistreated in the early years of existence and how society in general has come to recognize and even accept the religion as the legitimate church it is. But instead, more than half the book is all about incredulous here say about how the church hides truth from its members, how members are ignorant to the "real" history of the church, and how Joseph Smith had to be a fraud. It's just gets old. I would recommend as an audible, and I'd be very skeptical reading on your own.

Self Promoting and Dull

Spends the first hour talking with an interviewer, the thanking people, etc. After over hour just gets started. I Quit.

Respectful and informing from both points of view. Very easy to listen to and understand.

Mansfield at His Finest

Well written and researched, Stephen Mansfield not only gives a historical perspective, but sow excellent points on how the Church and those of LDS faith can portray themselves and the other with compassion.

This book was exactly what I was hoping for... a somewhat objective outsider's view of LDS. I felt like Mansfield presented the facts of the history of Mormons in a fair and honest light, pointing out the good and the bad of the church and its history without attempt to shame or discredit the "saints".

"The Mormon people have often been better than their leaders and the doctrines they have been given." I particularly liked this quote in the book.