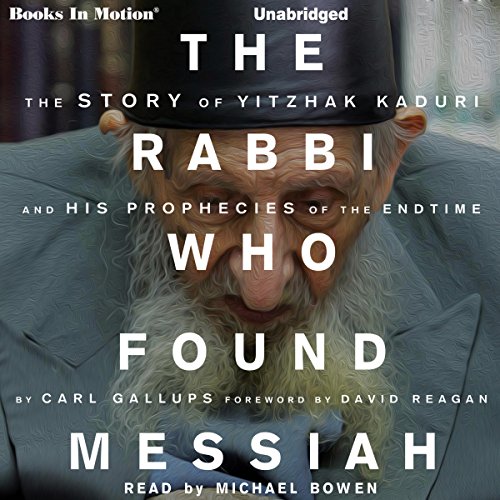 The Rabbi Who Found Messiah

By: Carl Gallups
Narrated by: Michael Bowen
Try for £0.00

Listen to the shocking story that the media have ignored and covered up.

In 2007, two Israeli news publications, Israel Today and News First Class, reported that the most famous rabbi in Israel's modern history, 108-year-old Yitzhak Kaduri, had left a cryptic death note revealing the name of the long-awaited Messiah. Within a year after the rabbi's death, the note was reported to have been verified as authentic by some of Kaduri's closest followers and then placed on Kaduri's own website (Kaduri.net). The purported Kaduri message proclaimed that Messiah's name was Yehoshua, or Jesus. Its significance shocked the religious world.

Shortly thereafter the furor began. The note immediately disappeared from Kaduri's website. The media refused to report further upon the matter. The Kaduri family and several others close to the Kaduri ministry began to claim that the note was a forgery or a mere fabrication - a cruel joke. Now author, senior pastor, radio talk-show host, and former law enforcement officer Carl Gallups, uses his biblical knowledge and journalistic and investigative skills to explore the matter inside and out. Gallup's exciting, detailed reporting reaches startling conclusions that will amaze you.

What listeners say about The Rabbi Who Found Messiah

I really enjoyed this work and felt like I was enriched by it as far as my knowledge about the various different views regarding Judaism, Islam, Christianity and how this esteemed rabbi's words intersect with each of them. Highly recommended.

so many things in here i was unaware of...highly recommend you listen to this. i enjoyed it so much that i may also get the print edition to have as a reference book.

I was definitely interested to here what the Rabbi had to say & what was in his note. However, for a Rabbi to be practicing magic or mystical powers that are forbidden by God in the Torrah...well let's just say I am not only surprised, but shocked & disappointed! I won't sit here & say I completely understand because I dont. The Jewish culture is entirely different than mine. However, God's word is the same yesterday, today & forever.
On a positive note, but not to spoil anything for future readers, I was pleased to hear what was in the Rabbi's "note".
I would definitely recommend this book to friends & associates.
Thank you for the fine narration, very authentic!

Strong beginning and ending. Seemed like a little too much filler. overall an okay listening experience.

Full Investigation of the Facts

The Rabbi Who Found Messiah is a very intriguing story with many facets that the author, Carl Gallups examines quite thoroughly without interjecting opinion or bias. The reader is given much information for further research, prayer and the study of the scriptures.

An interesting insight into the workings between Jewish and Christian relationships. The history is given in such a manner as to hold your interest and draw you into the events unfolding.

Great book, lots of information. Narrator kept your interest. Listened to it x2. Bought the hard copy for my library.

will be buying hard copy of book for reference

couldn't stop listening, very informative , good narration and easy to understand when he was quoting other people.

Contains a few kernels of truth conflated with copious amounts of hearsay; spends a portion of the book discussing why Barack Obama is potentially the Antichrist. the revelation of the Messiah does not sound like the Christ of New Testament as well.

Interesting take on the event and man

The book is pure speculation based on what has become an embarrassing event in Israel. Was the note real? IDK
Did Kaduri believe in the Messiah? IDK

I do know that I found this book an entertaining dive into the events and life of a great man. The writer has done good work here and is honestly providing his personal perspective with no subterfuge.

wow what an incredible story!

As a Christian I believe that I know who the Messiah is. A's a Christian I pray for my Jewish brothers and sisters to find Jesus too! what an incredible story! I've listened to it at least 10xs and learn something new each time. Great read!!! Pass it on to your Jewish friends!