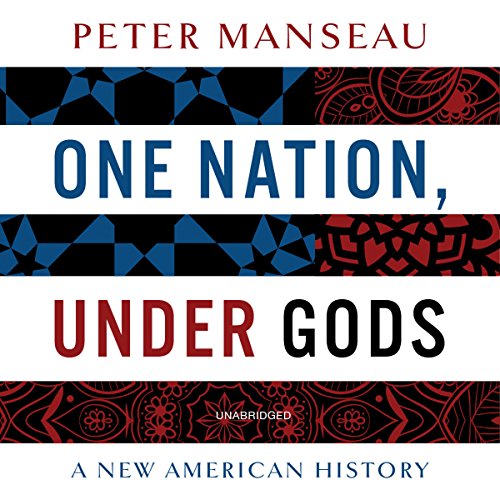 One Nation, Under Gods

By: Peter Manseau
Narrated by: Kevin Stillwell
Try for £0.00

A groundbreaking new look at the story of America

At the heart of the nation's spiritual history are audacious and often violent scenes. But the Puritans and the shining city on the hill give us just one way to understand the United States. Rather than recite American history from a Christian vantage point, Peter Manseau proves that what really happened is worth a close, fresh look.

Thomas Jefferson himself collected books on all religions and required that the brand new Library of Congress take his books, since Americans needed to consider the "twenty gods or no god" he famously noted were revered by his neighbors.

Looking at the Americans who believed in these gods, Manseau fills in America's story of itself, from the persecuted "witches" at Salem and who they really were, to the persecuted Buddhists in WWII California, from spirituality and cults in the '60s to the recent presidential election where both candidates were for the first time non-traditional Christians.

One Nation, Under Gods shows how much more there is to the history we tell ourselves, right back to the country's earliest days. Dazzling in its scope and sweep, it is an American history unlike any you've listened to.

What listeners say about One Nation, Under Gods

Tapestry of different pieces makes for a whole


The author tells a series of stories from 1492 until today, and he tells the stories so well that if I were to pick a random year, I could tell you which story the author told and also tell you the chapter that came before and the chapter that came after. He tells his story so well that I can in my mind recreate the book from the first chapter to the last and not miss a chapter in the telling. Within each story the author will put the story into the context of the time and then tie the pieces together.

The best way to illustrate his technique is to highlight one of his chapters, Mary Moody Emerson, known as the baby who was at one of the first battles of the Revolutionary War, saw a Hindu give a talk at her boarding house, this made her aware of beliefs beyond her own, and while she lived with her nephew, Ralph Waldo Emerson, she taught how one could think beyond their own certainties, and that led to the Transcendental Movement and led to Moby Dick by Melville. He ties the connections of each of his stories, gives the context, and always entertains. (A chapter after will be about San Francisco and the Chinese, and a chapter before was on the burning of the Capitol in the War of 1812 and Jefferson's library. Everything connects within this book, both within the chapters and between the chapters).

Within each chapter he ties each piece into a coherent whole and puts the context around the story, and between each chapter he relates it to the previous chapter such that he writes an incredibly interesting set of stories which gives everyone a peek into how a country is seamlessly woven together into a tapestry of different pieces which only makes sense after the whole is observed.

I found each of the stories awe inspiring. He is that good of a story teller, and he'll always tell you why the story matters today.

Loved it! Easy to follow. I learned more than I thought I would. I will be looking for more writings from this author. Will be encouraging others to try this book.

It is uneven in its treatment of different aspects of the various approaches to faith in what isnow the US. The section on post WW2 up to the new-agey period rambles a great deal. A huge amount of information about religion in America is jammed into it. Yet, I would still recommend it.