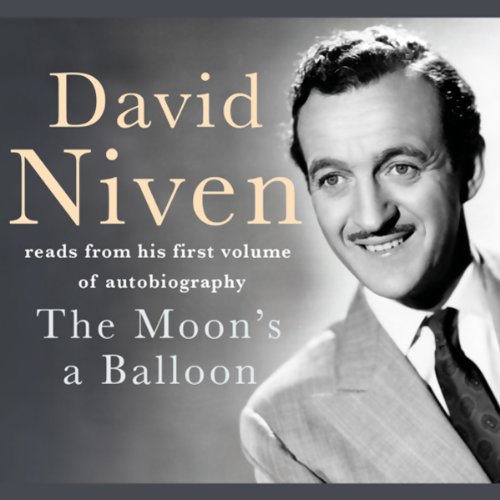 The Moon's a Balloon

When The Moon's a Balloon was first published in 1971, it received huge acclaim. The book became a classic and has gone on to sell over five million copies worldwide.

Rich in hilarious anecdote, it tells the story of Niven's school and Sandhurst days, his posting to Malta with the Highland Light Infantry, and how he escaped the army for a new life in the States. There he joined New York high society, before crossing the continent, lured by Hollywood. He returned to Britain to serve during the Second World War, but then made Hollywood his home.

What listeners say about The Moon's a Balloon

Everything I had hoped it would be!

A fabulous book, beautifully written and skillfully delivered by this enchanting author. The book moves very quickly and packs in lots of information. I listened to it twice and the second time, I picked up a lot of the detail I lost in the first reading. David speaks beautifully and his charm exudes throughout. A book I will surely enjoy listening to again. I would wholeheartedly recommend this book!

Abridgement leaves something to be desired

Would you recommend The Moon's a Balloon to your friends? Why or why not?

I cannot recommend this book because the abridgement leaves out so much of the written work.

David Niven's delivery of the abridged autobiography is excellent.

The lighthearted style of the writer/narrator made this a very good listen. There were some very sad passages and the emotions were alluded to, but it never became mawkish.

On the whole I was disappointed, probably because I had read the book when it was originally published and I am very aware of the huge gaps that the abridgement has left. It is such a shame as the book was one of the best of its type. I was going to buy and listen to the next instalment of David Niven's memoir, but I think that I will re-read the book instead - simply because I am so disappointed with this audiobook.

The moon's a balloon

Very good,but very short,I read this book years ago and there is a large portion missing,it is very poor value for money.

I have been reading a lot of autobiographies lately but I still return to this one as the most honest and moving. Short, heartfelt and authentic read by the man himself.

I normally avoid "abridged" versions of books, and in fact I only bought this version by accident.

Not sure if the full version would be any better - but I felt this version was a quick summary of events with no detail and few amusing anecdotes.

By all means listen to the full version - but this was disappointing.

Only two chapters in this book, just NOT GOOD ENOUGH. Should be the WHOLE BOOK.

What did you like most about The Moon's a Balloon?

Hearing the narator read his own biography. I have been put off several biographys in the past where 'ghost readers' are used!!

Apart from David, there are so many other characters to choose from as he glances in and out of other peoples lives that it is impossible to pick just one.

Have you listened to any of David Niven’s other performances? How does this one compare?

I am half way through 'Bring on the Empty Horses' and this is just as captivating. I did read the 'hard copy' version of 'The Moons a Baloon' many, many years ago but hearing the man read his own story is just awesome.

Where does The Moon's a Balloon rank among all the audiobooks you’ve listened to so far?

an excellent autobiography- memories of a bygone golden age in movies, recounted in a smooth, suave manner but never smarmy if you know what I mean? Some fascinating anecdotes, some laugh out loud funny moments and just a pity it seems over too soon.

What other book might you compare The Moon's a Balloon to, and why?

This is the same smooth and relaxed style of Michael Caine's autobiography.

Looking forward to his other book now for more stories. An eloquent story weaver. Great.

my only regret about this audiobook is that it is too brief, I wish it was longer.