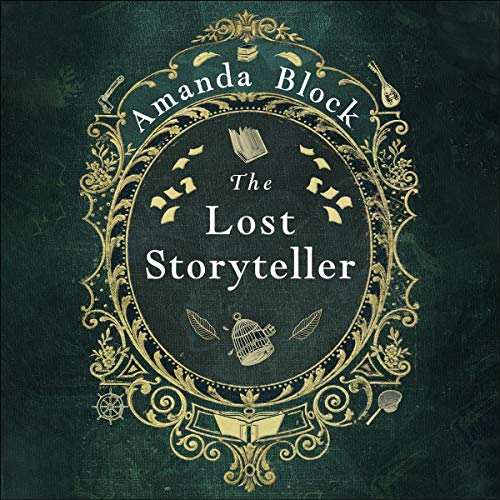 By: Amanda Block
Narrated by: Matt Bates,Polly Edsell
Try for £0.00

The Lost Storyteller is the heartwarming and evocative debut novel from a stunning new voice in fiction, Amanda Block. Perfect for fans of Ruth Hogan, Jessie Burton and Diane Setterfield.

Rebecca hasn't seen her father, Leo, since she was six. Her family never talk about him, and she has long since pushed him firmly to the back of her mind. All she knows is that once upon a time, he was a well-loved children's TV star.

But when a journalist turns up uninvited at her office, asking questions about her once-famous father, Rebecca starts to wonder whether there is more to Leo's absence than she realised. Then, looking for answers, she unearths a book of fairy tales written by Leo and dedicated to her - but what use are children's stories to her now, all these years later.

Tentatively, Rebecca tries to piece together her father's life, from the people he used to know and her own hazy memories. Yet her mind keeps returning to the magical, melancholic fairy tales, which seem to contain more truth than make-believe. Perhaps they are the key to unlocking the mystery of her father, the lost storyteller; to revealing who he was, what he went through - and even where he might be now....

The Lost Storyteller celebrates the magic of forgotten fairy tales and the power and resilience of imagination.

What listeners say about The Lost Storyteller

Sweet and Haunting at once.

Loved this unique exploration of mental health and it's generational impact on families. Sensitive and careful. Fantasy and muddled reality spun together with a modern backdrop of London, Edinburgh and Dorset.

it's just a really lovely story, fast paced and exciting! I loved every second of it

To start with, I doubted I could warm to the characters, however, the pace later picks up to bingeable levels. The story is unique, tragic and enlightening - I hadn’t anticipated that the story would be so thought-provoking!
Also loved Matt’s narration especially the final story.

A story to lose yourself in

Magical, emotional and unique, 'The Lost Storyteller' follows Rebecca as she searches for clues to the whereabouts of her absent father, Leo Sampson.

The mystery of Leo is beautifully woven into a set of original fairytales and Rebecca has to wade through accounts of her father's life from those around here, as she searches for the truth amongst the fiction.

Block has expertly crafted an enthralling tale of fathers and daughters, magic, and the power of storytelling. Her words will transport you across the UK from Devon to Scotland, but also to far off places and forgotten memories. Truly a book to lose yourself in.

Amanda Block has shown herself a true talent with her debut novel, and will be one to watch out for on the literary scene. I can't wait to read what she writes next!

This was an amazing story about overcoming mental health issues in families. About bring families back together that were torn apart. About love and forgiveness. All through seven fairy tales and an adventure to find the truth.

I first came across The Lost Storyteller by Amanda Block when I wandered into a bookstore in Cambridge. I loved the concept and wanted to see how the story played out. This book was unexpected in so many ways. It’s more general or women’s fiction than my typical read. The main character, Rebecca, comes across as standoffish at times, something that’s completely understandable given her history. As she embarks on a journey to find her father, Rebecca opens herself to parts of her past that she’s done her best to forget. I appreciated how this story was framed though a mix of fairytales and real life and the audiobook did a great job at bringing the different pieces to life. This book had some dark elements, something that fit with the fairytale vibe and the exploration of mental health that was a key component of this book. Overall, it was a well written story filled with the growth that comes only when characters recognize and embrace their full selves.

I listened to the book over one and a half days. I couldn’t put it down.