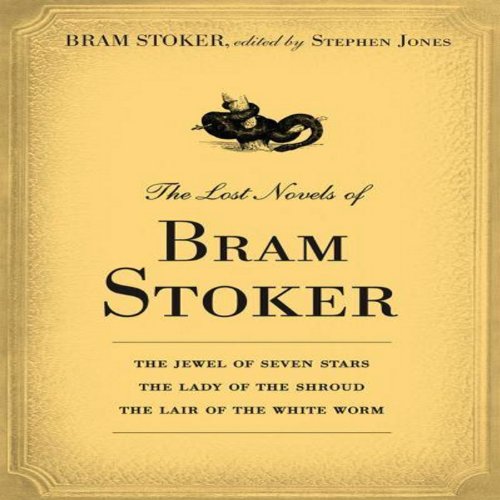 The Lost Novels of Bram Stoker

By: Bram Stoker
Narrated by: Robin Sachs
Try for £0.00

This highly enjoyable compilation of three of Bram Stoker's lesser-known novels shows the author's talent for supernatural horror turning away from Transylvanian counts and toward Egyptian mummy queens, mysterious women in shrouds, and giant white snake-like creatures. Stoker scholar Stephen Jones, who edited the volume, contributes an informative introduction that delves deep into Stoker's life and his inspiration for Dracula, the author's sole commercial success. Performer Robin Sachs' smooth baritone and delightful British accent is perfectly suited to Stoker's refined horror, at times lending the audiobook the feel of a tale told round a campfire. The Lost Novels are sure to be treat for Stoker's many fans.

A new compilation of Bram Stoker’s cult vampire novels for the 100th anniversary of his death.

This delightful new compilation of Bram Stoker's cult classics will be sure to satisfy any lover of vampire fiction, from Dracula to Twilight. All three novels were published after Dracula debuted in 1897. They flirt with vampirism, horror, and human folly in the best Gothic tradition - all attempts to duplicate Stoker's only success.

Included in this anthology are:

The Jewel of Seven Stars (1903), a tale about an archaeologist’s dangerous plot to revive Queen Tera, an ancient Egyptian mummy. The book caused a controversy upon publication for what readers called its "gruesome ending". His publisher refused to republish the book until Stoker revised it. The Lost Novels of Bram Stoker includes both the original ending and the lighter, more commercial version.

The Lady of the Shroud (1909), a classic example of early science fiction, although it remains one of his more obscure works. Beginning with a stunning sequence that finds a mysterious lady in a small coffin floating off the coast of a fictional country in the Balkan Peninsula, and beguiling the reader with a beautiful lady in a white shroud who may or may not be undead, this is a not-to-be-missed vampire tale!

The Lair of the White Worm (1911), a camp-horror tale from an acknowledged master of the genre. The great white worm slithers below, seeking its next victim....

What listeners say about The Lost Novels of Bram Stoker

Stories of there time terrible narrator.

The narrator Robin Sachs was terrible he sounded like a computer with no feelings or emotions.

Some people might be offended by these stories especially The Lair of the White Worm which uses the "N" word quite a few times so be warned if you can't read stories from the past and get offended by the way they where written then, the story also seems quite disjointed and jumps around a lot.

And one of them should have stayed lost

The Lair of the White Worm is the most racist novel I've had the misfortune to listen to so why Audible thought it fit to issue it is beyond me. 'Camp' it is not. The N word, 'savage', and various other derogatory terms are repeatedly used in reference to a character of African origin: he is even referred to as a slave at one point. I had to remind myself that the novel was written in the 20th C not the early 19th. Given this and the rampant misogyny and plot so full of holes it could pass as a Callander it does not make for an easy listen. It begs a number of questions, what medication was Bram Stker on when he wrote this? Who failed to edit it? Why was it originally published? Was the narrator that desperate for money that he agreed to read this? As a final novel it is a damning indictment.

The other two stories are a much better listen and of their time in a more positive way although the Lady of the Shroud does drag on a bit towards the end. There is evidence in both of some background research by the author to flesh out the plots but in all three novels he demonstrates an appalling lack of comprehension of basic science that can't be excused by their date of publication. He isn't a Jules Verne or H G Wells and can't carry the fantastic off and make the impossible possible in the same believable way and it spoils the story.

The narrator for all three stories ploughs through them with a fairly monotonous workmanlike delivery that isn't bad but doesn't add to the experience.

Not particularly exciting. Can't remember portions because I want engaged with the story. Wasn't excited to pick it up

The first novel, Jewel of the Seven Stars is quite enjoyable for the most part, as is the third, The Laid of the White Worm. The second, The Lady in the Shroud, was a labor to get through. luckily, the reading is quite good.

First story, not bad at all. original ending, though grim, was better. Second story started well as a ghostly adventure, but deteriorated into a way too long and boring rather lame sci fi story with its background the joyful merging of the peoples of the Balkans into a single, heavily armed country. Mainly interesting in contrast to modern history. The third story, which could have been a nice horror story, was ruined by the most virulant and overt racism that I have ever run across in a novel. Makes the racism of some of Twain's characters seem almost warm and fuzzy in comparison. I definitely don't recommend buying this book. It shows the deterioration of what was a fine novelist.

LOVED Dracula. These were impossibly boring.

If you liked Dracula, that doesn't mean you will enjoy these. dull. misogynistic. racist. Narratiom was pretty good, I wonder what he thought of them.

well this explains why the only book most people know by Stoker is Dracula.

If you can even really call them “lost”. That’s a bizarre choice.
I’d read Seven Stars before and liked it. The alternate endings included here are interesting to compare, too.
I feel like that one alone — even more than Dracula — is worth reading, and could be interesting fuel for an adaptation or reworking.

The other two… yeah, lose them.

Kinda see how they got lost.

last one is best. some interest over all, but none equal Dracula. Read that one for sure. Skip Frankenstein also.

This was my second read of "The Jewel of the Seven Stars" and this original ending is much better than the changed one. The jewel of the seven star is the best of the three though its fairly slow and the ending remains sudden and underwhelming. The lady of the shroud is almost unreadable. After the first third it steps away from Gothic horror and descends into this mind numbing hyper detailed creation of a fake utopia on the back of a perfect 7 foot tall british man made king of a pretend Greek kingdom. Very painful to get through and not interesting once the supernatural elements are eliminated. The lair of the white worm had alot of interesting elements but simply feels incomplete. Its hard to follow and does not feel finished.

So glad to experience Stoker's "other" works. This Anthology format is a great value, but for the love of organization - PLEASE label the titles and chapters! The beginning and end of each book, at least. As formatted, it looks like 1 book with 80 chapters. Having listened to many audible titles, I would say this narrator is pleasant but monotone with no inflection and little dynamics. Stories 5 Format and narration 3.

The first story I found gripping and suspenseful, but with an unsatisfactory ending. The second one was also very suspenseful, but anticlimactic. The third just wasn't very good at all. Disjointed in narrative and lacking in suspense it seemed to rely more on horror, and there wasn't even much of that. Also it had more racist overtones than the other two. Not Stoker's best work. Performance was very good though.