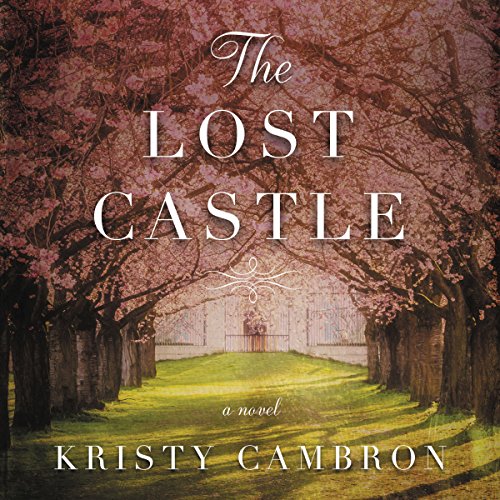 By: Kristy Cambron
Narrated by: Amy Rubinate
Try for £0.00

Bridging the past to the present in three time periods - the French Revolution, World War II, and present day - The Lost Castle is a story of loves won and lost, of battles waged in the hearts of men, and of an enchanted castle that stood witness to it all, inspiring a legacy of faith through the generations.

Ellie Carver arrives at her grandmother’s bedside expecting to find her silently slipping away. Instead, the beloved woman begins speaking. Of a secret past and castle ruins forgotten by time. Of a hidden chapel that served as a rendezvous for the French Resistance in World War II. Of lost love and deep regret...

Each piece that unlocks the story seems to unlock part of Ellie too - where she came from and who she is becoming. But her grandmother is quickly disappearing into the shadows of Alzheimer’s and Ellie must act fast if she wants to uncover the truth of her family’s history. Drawn by the mystery surrounding The Sleeping Beauty - a castle so named for Charles Perrault’s beloved fairy tale - Ellie embarks on a journey to France’s Loire Valley in hopes that she can unearth its secrets before time silences them forever.

Praise for The Lost Castle:

“Spanning the French Revolution, World War II and today, Cambron masterfully carries us into each period with all the romance and danger of the best fairy tale.” (Katherine Reay)

"It's been a long time since I've been so thoroughly engrossed in a novel...The Lost Castle kept me spellbound!" (Tamera Alexander, USA Today best-selling author of To Whisper Her Name and Christmas at Carnton)

What listeners say about The Lost Castle

This book was extremely different than my normal read. I enjoyed it immensely. The narrator was phenomenal. I never once questioned who was who and what era they were in. She had so many people to perform and I couldn’t think of a better person. Thank you Kristy Cameron and Amy Rubinate. What a wonderful way to spend my Christmas prep than with this book. A solid. 4.5 from me!

The author expertly weaves the past and present, fact and fiction, fairy tale and harsh reality into one intriguing story that spans three generations. The castle binds all the lives of the characters together. It is the nexus where they discover their true selves. This book will aid anyone who is on a journey of discovery, anyone who feels the need to rebuild after tragedy or the loss of someone special. The magic of the castle can provide comfort and direction as you travel the difficult road ahead.

I have read several dual timeline historical fiction/contemporary romance novels, but this story had 3 timelines and 3 separate storylines all woven together. With this type of book it's fun to try to figure out ahead of time how the story lines are related, and how they intersect. With this particular story, I had guesses Bout the connections, but I wasn't completely right. Sometimes with a book with multiple story lines, one may be very interesting and the others are not, but with this story all 3 storylines were captivating. Very interesting. I love anything that takes place during World War II as the middle storyline did. Highly recommended book. As for the audio book recording, this was done very well.

History, time travel and true sacrifice and love. Should you want a feel good read, this ya the one!

Would be better as a reading book

I really enjoyed this story, although it was a bit hard to follow as an audio book. It jumps between three different time periods, and even though the narrator does a very good job, it can be hard to follow what time period of the story you are listening to. On this one, I recommend reading (not listening) the book!

I really liked the story. I think reading it would be better. Listening I would get confused as to what one period we are in.

Loved the story itself.

Loved the story itself, but was too predictable. Also, the story begins in a town named Marquette, MI. I lived there for 39years and the little description the author gave of the area I did not recognize; or was so vague, that it could have been anywhere. I found this odd, and rather showed lack of proper research. over all however, I love a good love story and this more than meets that quota.

A Spectacular Journey in Time

I've just finished listening to this book for the second time. Kristy Cambron so artfully weaves 3 beautiful and unique love stories from 3 different time periods around this enchanting castle. It's so hard to pick a favorite! Your heart will be transported from century to century. The attention to historical detail breathes life into each story while not distracting you in the process.

I love getting lost in romance but really dislike superfluous intimate details. Thank you, Kristy, for keeping it clean and allowing me to relish the stories!

Amy Rubinate does a fine job narrating this very difficult piece with a variety of characters and accents. Her performance carried me away to another time and place for a lovely escape. She really delivered the emotion well.

Kristy, I've already listened to the other 2 books in this series and I'm hungry for more! Please keep writing!

Slow to start but picks up speed.

Almost gave up on this one but glad I hung in there. Beautifully told story of 3 generations, inspired by a real castle in the Loire Valley. Feel like I need to take the field trip now!