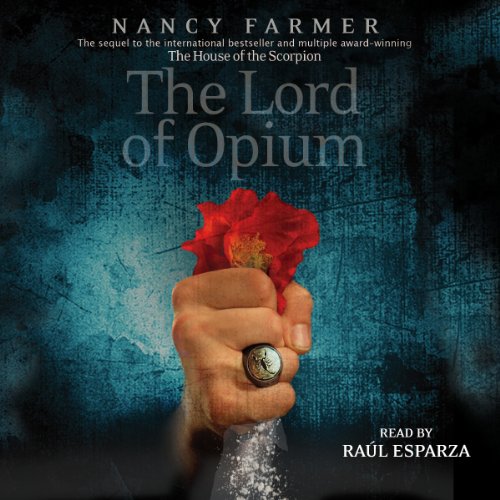 The Lord of Opium

By: Nancy Farmer
Narrated by: Raul Esparza
Try for £0.00

As the teenage ruler of his own country, Matt must cope with clones and cartels in this riveting sequel to the modern classic House of the Scorpion, winner of the National Book Award, a Newbery Honor, and a Printz Honor.

Matt has always been nothing but a clone - grown from a strip of old El Patron’s skin. Now, at age 14, he finds himself suddenly thrust into the position of ruling over his own country. The Land of Opium is the largest territory of the Dope Confederacy, which ranges on the map like an intestine from the ruins of San Diego to the ruins of Matamoros. But while Opium thrives, the rest of the world has been devastated by ecological disaster - and hidden in Opium is the cure.

And that isn’t all that awaits within the depths of Opium. Matt is haunted by the ubiquitous army of eejits, zombielike workers harnessed to the old El Patron’s sinister system of drug growing - people stripped of the very qualities that once made them human.

Matt wants to use his newfound power to help, to stop the suffering, but he can’t even find a way to smuggle his childhood love, Maria, across the border and into Opium. Instead, his every move hits a roadblock, some from the enemies that surround him... and some from a voice within himself. For who is Matt really, but the clone of an evil, murderous dictator?

What listeners say about The Lord of Opium

Where does The Lord of Opium rank among all the audiobooks you’ve listened to so far?

Not a book I would have chose but got lost in the drug world with Matt. A lot of this is down to the narrator. Really enjoyable and believeable in a weird way!

What was one of the most memorable moments of The Lord of Opium?

Which character – as performed by Raul Esparza – was your favourite?

The Mushroom Master, loved the accent

Could have done but there's work, sleep etc

Would you listen to The Lord of Opium again? Why?

It's a excellent story. Read the first book in high school but I didn't know that there was a sequel to it, so I had to listen to it and it didnt disappoint at all. Keeps you going till its over

What other book might you compare The Lord of Opium to and why?

House of the scorpion. Because its the same kind of story filled with twists and turns

Which character – as performed by Raul Espanza – was your favorite?

Several but I'm not going to spoil it for you.

Great read for anybody that likes a good action packed story

I would encourage everyone to read the first book House of Scorpions for the fall character development prior to this book.

I love stories by Nancy Farmer!

What a great production. It reminded me a little of some James Bond stories near the end, but I still love the whole premise of a nation overtly called
Opium, run by a smart but wicked drug lord. I love the character of Mateo Alacrán.

Not your typical plot!!

Loved this book and House Of The Scorpion!! Both are great reads!! There are so many discussions that's could begin with this book.

Raul Esparza is the GOAT of audiobooks

Great sequel. The story picks up right where you left off. I wish there was more

I really enjoyed the narrator. He made a somewhat slow story still entertaining. I liked hearing the conclusion but preferred the first book.

I remember reading the original book my sixth grade year circa 2006 to 2007 & being hooked by the world building of the House of the Scorpion. Only to then find out in my adult life that there was indeed a sequel, it felt so nostalgic being thrown back into that world. Raul Esparza did a top-notch job; The Mushroom Man sounds like Sting & Sinfuego gave me a lot of Pedro Pascal vibes.

This was the perfect follow-up to the first book, beautifully written and poignantly performed!

The ending was a bit soppy

The saccharine taste of the ending was expected. This is a YA novel, so.... But as an adult I could have done without it. The rest was as good as the first novel and I enjoyed it. I will copy and past my review for the first, because it still applies; "This is YA fiction certainly but with a dark side. In terms of difficulty of language and comprehension (but NOT story) think early Harry Potter novels. The characters are complex and the world is wonderfully woven. I can imagine this awful world existing and that made me a bit sad. For someone that is some 40 years away from being a YA it was an easy listen but enjoyable nonetheless. I loved the narrator he did a fine job."