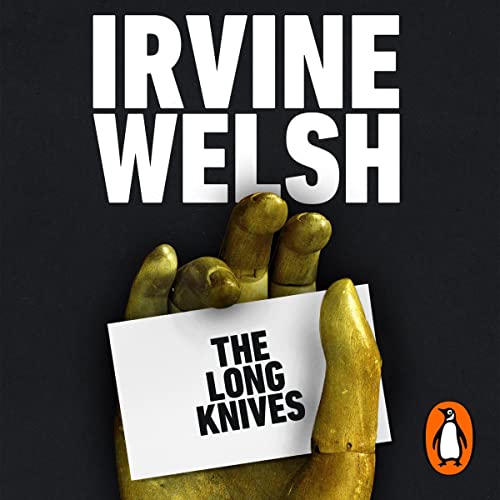 Justice can be a blunt instrument.

But not this time: I repeat, he is not writing this story.'

Ritchie Gulliver MP is dead. Castrated and left to bleed in an empty Leith warehouse.

Vicious, racist and corrupt, many thought he had it coming. But nobody could have predicted this.

After the life Gulliver has led, the suspects are many: corporate rivals, political opponents, the countless groups he's offended. And the vulnerable and marginalised, who bore the brunt of his cruelty—those without a voice, without a choice, without a chance.

As Detective Ray Lennox unravels the truth, and the list of brutal attacks grows, he must put his personal feelings aside. But one question refuses to go away....

Who are the real victims here?

What listeners say about The Long Knives

Thank goodness you can adjust the speed of the narration

Really enjoyed the story. Typical Irvine Welsh but I really struggled with the unpleasant speed of Tam Dean Burn’s voice during the actual reading. I’ve listened to him previously and never found this a problem. If I hadn’t been able to adjust the speed very slightly I wasn’t going to continue with listening. Apart from that, Irvine Welsh has delivered the goods, exactly as expected.

Great book as always with Welsh

This book contained the usual helping of sick humour from Welsh at points, graphic violence and sex scenes.
Somehow Welsh managed to write all of it without ever coming across as creepy or weird and it actually adds to the story which is unusual.
Loads of great characters, some old, some new and some old friends brought in briefly here and there.
Would and have recommended this book.
Choose long knives.

Irvine and Tam nail it again

Always nice to hear more of the big Jambo DI

IW was my favourite cutting-edge author back in the day.. However, the storyline is lame and the narrative hard work. Retire?

Might just be me, but I'm not a fan of the Welsh crime novels. I like the grittiness of the author's books but Ray Lennox is a bit of a bore off for me. I wanted him dead in Filth.

I got bored and didn't finish it. Will try again in the future. I usually love Irvines books

Both funny and intriguing. Another classic, dark and disorderly leading character Lenox unravels a gruesome case highlighting the class barriers faced in British society to a tee