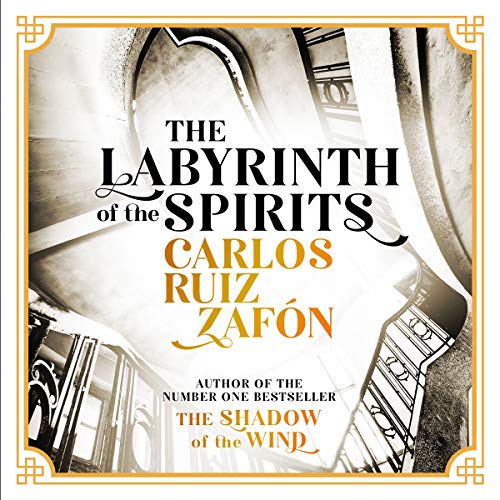 The Labyrinth of the Spirits

From the international best-selling author of The Shadow of the Wind.

Barcelona, 1957. Daniel Sempere runs the Sempere & Sons bookshop, is happily married and has a son. No longer the child who discovered the Cemetery of Forgotten Books, he is still haunted by the mysterious death of his mother when he was six years old. Meanwhile his best friend and accomplice, Fermin, is about to marry the love of his life. But something appears to be bothering him. One morning, when Daniel is alone in the shop, a mysterious figure enters and buys a precious copy of The Count of Monte Cristo. Then, to Daniel's surprise, the man inscribes the book with the words 'To Fermin Romero de Torres, who came back from the dead and who holds the key to the future'.

That night Fermin confesses that he was once in prison and that he had to fake his own death to escape. Now his former cellmate has reappeared with a possible key to hidden treasure. But is it a trap? And why is Daniel's wife meeting someone in secret? And who was the sinister figure Daniel's mother went to meet on the night of her death?

The Labyrinth of the Spirits is a stunning Russian doll of a novel, an addictive story that will lure you into a world of plots within plots, where even the shadows have a story to tell....

What listeners say about The Labyrinth of the Spirits

An awesome, epic finale to the Cemetery of Forgotten Books series. This book is more or less 4 books long in itself, making it a mammoth read/listen, but you'll still feel bereft at the end of it, sad that you will no longer be able to engage with the fantastic array of characters that you've got to know so well over the series. I recommend the series of books to anyone, but read them in the right order to get maximum enjoyment.

From labyrinth to clarity

It was hard to keep track of the characters and connections at times. Maybe that was added to by the brutality of some (anticipated) scenes which made me stop listening to the book before sleep. But the book is so compelling that I had to go back. so glad I did. Brilliantly weaved, with complex characters scarred by life, and scenes painted so vividly I felt I was sitting just outside looking in. And the narrator couldn't have been better - his voice is made for this and he pitched his characterizations and emotions just right. Some books build brilliantly and the ending is a real let-down. Not this one. It pulled everything together, added even more, and left me satisfied and complete. Genius. and I'm not sure if I'm talking Julian (x2) or Carlos!

An incredible journey from the Shadow of the Wind through two other wonderful books and ending up with this epic. I only wish that it wasn’t over.

Like many others, I enjoyed this volume of The Cemetery of Forgotten Books most of all. I was worried, from the synopsis, that it was a repeat of the previous volume but that is in no way the case. Some of what has gone before is repeated but embellished, filling in some of the gaps, in a web of storytelling that is a labyrinth in itself.
I loved this book and all the characters; the language (why doesn't the poor translator get a mention) and the narration. I thought Dan Stevens was the supreme but Daniel Weyman was wonderful too and at least a match for Dan. I am so sad that it's all over and wish that there was more.
And so, so sad, that such a brilliant, talented writer who writes so magnificently, conjures vivid pictures with his words, creates tremendous memorable characters and injects humour in the telling, will write no more. RIP Carlos Ruiz Zafon and "thank you".

The best narrator I have had the joy to listen to!

I enjoyed the first two books very much, but this one was certainly the crowning glory.

Apart from the odd graphic description and at times a little too much swearing for my liking, the language is absolutely beautiful and it is easy to get lost in the world that the author is so effortlessly portraying.

What added to my enjoyment of this book was the wonderful narration by Daniel Weyman. Absolutely faultless in my opinion. A wonderful tribute to the storyteller and wordsmith that is Carlos Ruiz Zafon.

I will definitely be listening to this series again!

Fantastic last book of the series

What an emotional, enthralling series. The books need to be read in order to follow the various characters. Their stories are pulled together in the last book. May Carlos Ruiz Zafron, RIP June 2020. Adiós

Beautifully written/narrated. The power of literature at its best. Fighting for the truth and the friendship until the end. The best end for this superb series.

This is the fourth in The Cemetery of Forgotten Books series, and I was an immediate a fan of the audiobooks from the first.

Fans of the series will note this is the fourth narrator as well, and while Daniel Weyman does a good job I found he didn’t provide the varied voices of the previous narrators which disappointed me. With a raft of characters to vocalise, I could only pick out about three different voices. In some exchanges I lost who was speaking between a man and a woman.

Although a longer story by quite a way than the previous stories, this still held its own and was in keeping with the previous books - adding in new plots as well as continuing the previous three books - however contained far less in terms of twists and surprises, or 'other-worldliness'. At this point I should say it not necessary to have read the others but it would be most beneficial if you have, and ties up every loose end I could think of without being contrived; which was great but may have constrained the writer somewhat.

That said, the writing remains beautiful and takes you away to a different time and place, nothing was too obvious and the characters we have loved through the previous trilogy grow with us while new faces are introduced. It kept me entertained for nigh on 28hrs so must be doing something right and I'm looking forward to others by the same author, but feel this series can be put to bed now, wonderful as it was and I thank the author for delvering time after time.

For lovers of language this book is a feast of finely crafted prose as well as a clever plot delivered with a magnetic need to listen to the next chapter, and the next....

Another fine book in the series. Beautifully drawn and absolutely engrossing. The whole series has drawn me into another world.

Pulled in, entranced, wrung out and uplifted

This performance brought to life the magnificent word pictures that Ruiz Zafon creates. At times horrifying, laugh out love funny (who doesn’t love Fermin?) and achingly beautifully written. A big fan of this series, which I have in hard copy as well, an even bigger fan of the theatre of this reading.

This series is a masterpiece. A great literary achievement. It changed my life. I will return to it again and again to learn its secrets. I love the characters, the setting, and the very words everything is built on.

enter into a wonderful world

Loved it.
Great characters and a story that twist and tuns in a world full of love and danger.

Loved it so much. Loved this story. The narrator made it so good. Changing his voice for each character I d forget it was the same person. Fermin was perfect just the funny guy I had imagined