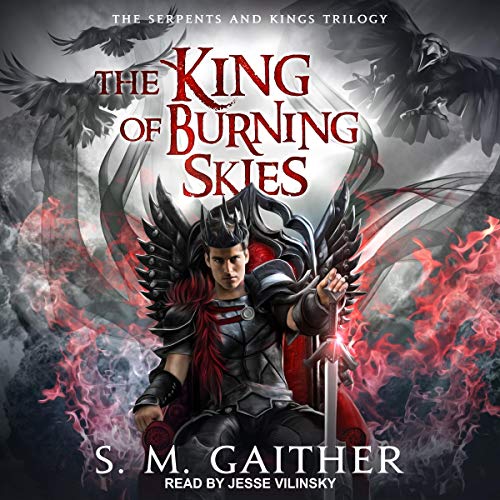 The King of Burning Skies

War is coming to the Sundolian Empire. Can a forbidden love between a prince and a dragon save it? Or are they destined to bring it all down in flames?

The kingdoms are shattering. A tyrant rules from the north. The Dragon clan, once exiled beyond the edges of the empire, has joined forces with a bloodthirsty, opportunistic king in the south.

And the crown prince of Rooks is running out of options to keep the people and places he loves safe. His best chance to save his world and take the crown from his mad father may lie in the most dangerous of those exiled Dragons-a woman who is just as likely to ruin him as she is to save him.

Alaya is part human, part divine, and fully prepared to use her growing powers to destroy everyone that has hurt and betrayed her. The list of those people is long. Despite her pain, she still intends to find a way to bring peace to her world-but she can't do it alone.

The high king must fall. What was broken must be mended.

And somehow, both Dragon and Rook must find a way to protect each other from the dark side of the magic building within and around them....

What listeners say about The King of Burning Skies

I adored this second installment of the Serpents and Kings series! Jesse does a fantastic job bringing these characters to life. She's also incredibly consistent in their voices from the first book through the second! Can't wait for book 3! I highly recommend this series!

I’m just finishing book 2 and going to start the third as soon as I finish writing this. This series is a lot more amazing than I had ever anticipated! I read the first on Kindle and was immediately drawn in, this second book was no less intriguing and well written. I’m hoping the third is just as good…

I really the like world building and the characters in this series. And the plot is interesting. However, the pacing of this series is so slow it’s agonizing. This might be partly the narrators fault because she constantly uses pauses making even actions scenes feel slow. Also, the narrators uses on two different voices for all the characters creating a lot of confusion.

Irritated with the Heroine of the story

I cant stand heroine because she comes off to me as always taking the easy way out. She is literally saying let me let the devil manipulate me and control me because its easier than finding another way to recover from using her magic. I can't believe this guys has gotten his way all through the story and everyone is just letting him get his way. Someone should have already separated his body from his head in my opinion but this is just me and I am not the writer. It's just irritating watching this guy get his way so easily. She doesn't have a voice she just goes along with what the devil says all the while he is leading her to hell and she is willing following him.

Addicted to these stories of the fantasy world that S. M. Gaither has created.

But the drama in this book

Roller coaster of emotions . There was a lot going on in this second book. Betrayal and how to deal with it. I found myself upset and outraged on behalf of Alaya. But her naïveté was excruciating to listen to. Then you love her resilience and coming to herself . There was a lot of action, pain and war in this book. I had to pause and take a break from the book to reset the turmoil created by the constant strife . It is a well built world with characters you love and hate and love again .

Side note- why are fantasy books centered on late teens main characters who let’s be honest are rarely capable of this kind of maturity . The dialogue, life decisions and emotions don’t really read like 18-20 years old . But I loved the book

i really like this series so far. (mostly) It has good action in it and i love the relationships. My issue is with her getting deeply betrayed by someone very close and forgiving and forgetting in all of five minutes, that annoyed me. But other than that, i recommend this book. and the narrator is great.. can't wait to get my hands on the next one..