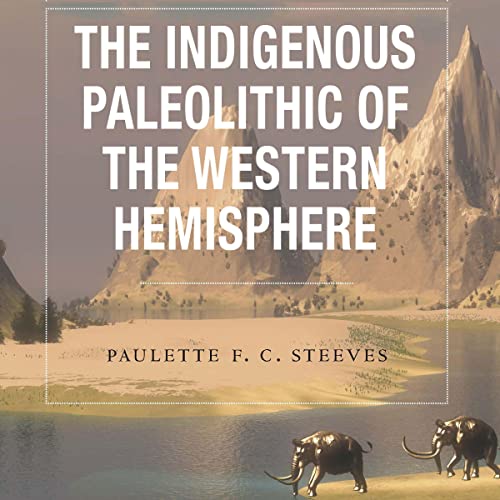 The Indigenous Paleolithic of the Western Hemisphere

The Indigenous Paleolithic of the Western Hemisphere is a reclaimed history of the deep past of Indigenous people in North and South America during the Paleolithic. Paulette F. C. Steeves mines evidence from archaeology sites and Paleolithic environments, landscapes, and mammalian and human migrations to make the case that people have been in the Western Hemisphere not only just prior to Clovis sites (10,200 years ago) but for more than 60,000 years, and likely more than 100,000 years.

Steeves discusses the political history of American anthropology to focus on why pre-Clovis sites have been dismissed by the field for nearly a century. She explores supporting evidence from genetics and linguistic anthropology regarding First Peoples and time frames of early migrations. Additionally, she highlights the work and struggles faced by a small yet vibrant group of American and European archaeologists who have excavated and reported on numerous pre-Clovis archaeology sites.

“This is an important and timely contribution to the field.” (Kisha Supernant, University of Alberta)

“A timely analysis of the ethnocentric influences on past and present scientific inquiry and archaeological practice from the perspective of an Indigenous archaeologist.” (Kathleen Holen, director of the Center for American Paleolithic Research)

What listeners say about The Indigenous Paleolithic of the Western Hemisphere

Good perspective; reads like an expanded version of a PhD dissertation. Takes on an important area of discussion and calls for a deeper and longer historical view of people in the Western Hemisphere.

this is a book I look forward to rereading many times. I welcome the honoring of indigenous ancestry culture and wisdom. the wealth of data the author presents from the Paleolithic in North and South America invites urgent and immediate exploration to increase our knowledge.

This book was better than I thought it would be. Worth the time because the message is important and at least for me unknown till I read this.

It has only deepened my respect for the culture and history of the first people. I hope it can work to open the minds ans hearts of every reader.

Decolonization starts in your own head

Thank you for educating me on so many levels! A manifesto to decolonize archeology (or science that is) and finally acknowledging that each indigenous people have the only right to be and claim what they are and where they come from. If ever we would have a chance would history repeat itself ? Sadly I think it would, this to the detriment of indigenous population and here I mean all, all over this blue planet.

It's worth knowing, before picking up this book, that it's as much about the politics of archeology as it is about the archaeology itself. The politics of it are actually quite interesting. Readers of Charles Mann's 1491 will be familiar with some of it, as he also gets into that in his book. There's also a lot of archeology, as one purpose of the book is to make more widely known the evidence from multiple archeological sites supporting very early human entry into the continent. Not 12,000 years but as much as 30,000 - 100,000+ years ago. Paulette gives an overview of the scientific methods relevant to understanding the evidence. Her politics of archeology are of decolonization. Some may find the jargon and leftist language difficult to get through, either because of unfamiliarity with the jargon or because of ideological differences with the author. But it's worth the effort because she has some very important things to say and some fascinating evidence to present. The material is advanced and challenging. It's the kind of history that doesn't just tell a historical narrative but gets into the nuts and bolts of the kind of work that archeologists and historians have to do. And for those who find that level of detail interesting this is a gem.