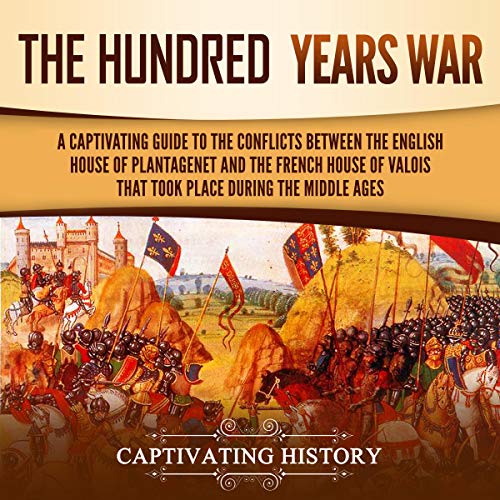 By: Captivating History
Narrated by: Richard L Walton
Try for £0.00

If you want to discover the captivating history of the Hundred Years' War, then pay attention....

The Hundred Years' War changed language, national identity, weaponry, and even the way people think about war. It is part of the greater narrative of human history and gives a snapshot of how human nature can behave when pressed by the extremity of such a conflict - sometimes with unspeakable honor and courage and other times with cowardice, selfishness, and arrogance. There are many lessons to be learned from this war. Its tale is a cautionary one, but it is also a tale of adventure, battle, hope, and divine intervention. It's the tale of a war unlike any other.

In The Hundred Years’ War: A Captivating Guide to the Conflicts Between the English House of Plantagenet and the French House of Valois That Took Place During the Middle Ages, you will discover topics such as

So, if you want to learn more about the Hundred Years' War, scroll up and click the "Buy Now" button!

What listeners say about The Hundred Years’ War

This is a great history of the Hundred Years War lives up to expectations raised by the earlier volume. Superb!

Amazingly good. Tells the listener about the war on all levels, from the workers to the soldiers to the majesty and the king himself. Incredibly detailed and informative.

Well-written and based on what appears to be careful research. One hopes that this author will continue this look at history. I have traveled a little in France and seen some of the towns named in the series as well as Paris.

Captivating history's spectacular history of the Hundred Years War is a treat for any history fan. Rarely will you find an educated and massively investigated history as fluently and engagingly written as this book. A fine testimonial to the value of narrative history.

The author writes with a strong voice, rarely flagging presumptions or results as such. Care must be taken to cross-reference his discussion where it differs from the narration of a set of factual events.

This author does an excellent job of giving a smooth, clear historical narrative of the last phase of the Hundred Years War, explaining an extremely complex set of events.

The book is everything it promises, with one exception. This author is an extraordinary advocate, historian, and writer, but he wrote volume one before this one.

This book offers a quick and reasonably short summary of what must have been one of the worst periods of European history. Battle after battle, siege after siege, French and British killed each other mercilessly for the command over the sources of France, the whole time under a code of practice that today we have great difficulty in understanding.

This book is unquestionably one of those short and sweet examples when it comes to non-fiction. It provides you just enough knowledge for you to get a grip on the whole condition but not too much to make you feel smothered.

This is a good initiation to the period and provides a firm basis for interpreting the subsequent events of the War of the Roses and the rise of the House of Tudor.