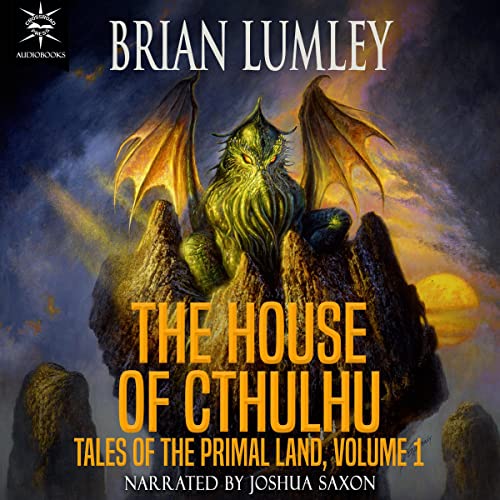 The House of Cthulhu

By: Brian Lumley
Narrated by: Joshua Saxon
Try for £0.00

The House of Cthulhu introduces the weird and wonderful world of Theem'hdra, an island continent of wonders and terrors, where brave men die terrifying deaths, awe-inspiring sorcerers hurl powerful magic at each other, and monsters abound. This is classic Lovecraftian horror from one of the masters of the form, British Fantasy Award winner Brian Lumley.

The volcanic eruption that created the island of Surtsey in 1967 also revealed a long-hidden cache of documents that told the fantastic history of Theem'hdra as written by the sorcerer Teh Atht. Building on translations begun by the scholar Thelred Gustau—who vanished under mysterious, some say magical, circumstances—Brian Lumley brings the saga of the Primal Land to audiences of today.

Here, the wizard Mylarkhrion—most powerful of the terrible magicians who walked the earth in those long-ago days—battles sorcerers jealous of his knowledge, power, and wealth. His own apprentice, thinking he knows all of his master's secrets, challenges him—but Mylarkhrion has one final trick up his sleeve.... When the assassin Humbuss Ank, who specializes in killing wizards, makes Mylarkhrion his target, he avoids or destroys nearly all of the sorcerer's traps, forcing Mylarkhrion to a desperate final gamble for survival. But even Mylarkhrion has a weakness, a lust for power that drives him to summon the Great One, Cthulhu, and so call doom upon himself!

The fabled riches of the House of Cthulhu draw thieves and warriors from throughout the civilized and uncivilized lands, but none escape with so much as a single gemstone, for they discover that Cthulhu's House is not a temple but a dwelling place. Surely the Elder God lives there still, waiting for an unwary person to open the portal between his world and ours....

What listeners say about The House of Cthulhu

Lovecraftian horror at its best

What an adaptation, Lumley’s rich, detailed world fused with Saxon’s excellent narration brings to life these tales of the unexpected. Having read most of Lumley‘s literary works the Cthulhu series was one I had ignored much to my regret. However, experiencing the novel for the first time as an audiobook really does add a rich flavour to the experience. I do so hope Audible adapts ‘Sorcery In Shad’ (being the final ‘Tales of The Primal Lands series of novels) as it’s rather odd they adapt the first two novels but not the 3rd! (Rights issue I suppose?). Anyway, thoroughly enjoyed this novel and I recommend the book to anyone who gets a kick from Lovecraftian horror.

The Primal Land Series on Audible at Last!!!!

The Primal Land series by Brian Lumley features epic tales of sword and sorcery set in a prehistoric land where the Great Old Ones are worshipped. I've been looking forward to these books being available on Audible for a while now and this first instalment definitely doesn't disappoint. All of the stories included are top notch Lovecraftian fiction, with my favourites being The House of Cthulhu, Tharquest and the Lamia Orbiquita and Lords of the Morass.
Joshua Saxon once again excels with the work of Lumley. He is perfectly suited to tell these tales. His resonant and ominous voice perfectly conveys the creeping dread and impending doom inherent in Cthulhu Mythos stories. I'm really looking forward to the next volume.
Another excellent presentation from Crossroad Press.

Let A Friend Tell You A Story...

Being that I've been a huge Brian Lumley fan since I was a teenager, and the same for Lovecraft's old gods, (minus all the racism), so when I was offered this audiobook for review, I accepted and here we are!

On the whole, I found these to be more Sword & Sorcery type tales than Lovecraftian, but I was okay with that. Listening to these tales was a nostalgic experience for me. I remember first being introduced to worlds like this growing up...through all the magical pages I could get my hands on. Pulp stuff, sword and sorcery, dragons and knights, dark jungles and all new planets. I've since moved on from a lot of that, but only in regards to more contemporary works, not the enjoyment of the tales.