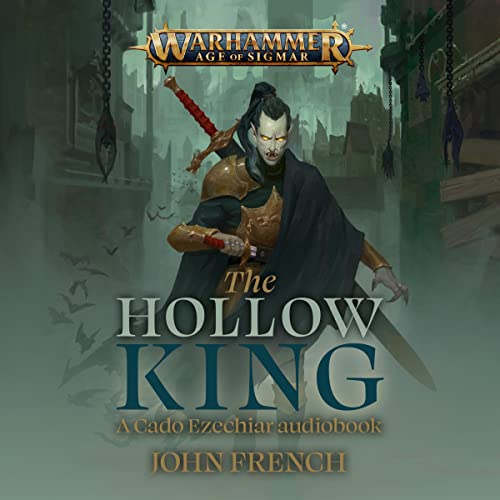 By: John French
Narrated by: Richard Reed
Try for £0.00

In his first full-length novel, the vampiric anti-hero Cado Ezechiar finds himself caught in a web of war and deceit in the city of Aventhis.

Listen to it because

The cold-hearted Cado Ezechiar is obsessed with revenge and keeping to his strict moral code—can he stay true to himself and avenge those who he has lost?

Cado Ezechiar is a wanderer who has outlived the memory of the age that made him. A Soulblight vampire who accepted the curse as his people and kingdom fell to Chaos, he now roams the Realm of Death and beyond seeking retribution and salvation for the ones he failed.

Aided by the bound spirits of those he lost, Cado follows a path of revenge, hunting the servants of Chaos to slake his need for blood while seeking the Sorcerer of Change who destroyed his kingdom. When his hunt leads him to the free city of Aventhis, Cado becomes caught up in the machinations of greater powers—beings who see the city and its people as dust in the eyes of ambitious gods. Torn between his code of honour and his desire for vengeance, Cado must navigate a web of war and deceit, or lose everything.

What listeners say about The Hollow King

Not just another edge lord?

I hate vampires. And vampires that are TOO NOBLE to drink innocent blood is a tired trope, fresh only too naive teenage neonates. Too often vampires are used as a lazy device to add both edgy interpersonal conflict and an excuse to write gore. At first I thought here we go again, but I persisted in the hopes of using some background NPCs for Soulbound. As the story progressed i was surprised to find the writing excellent, the characterisation thoughtful and the story compelling. Richard Reed's telling of the tale is cinematic. I still hate vampires but I loved The Hollow King.

fantastic, one of the best AoS story's I've heard, worthy of a listen. I will be definitely looking forward to the next book of the hollow king.

A great AOS novel and start to a series!

A great story set in the dark undead worlds of AOS. A strong story that stands above much of the other good AOS offerings with a great lead character and setting. There are a number of standout moments and French really knows how to.write the creepy parts of the world and especially of magic. Superb narration, with clear voiced characters. Worth a listen for sure!

loved the story, well written and performed, very much looking forward to another in the series!

The Hollow King follows a fallen prince as he attempts to uncover a chaos conspiracy in an old medieval town.

I really like the AOS novels with a strong protagonist. Sometimes I lost the flow of the story and had to rewind. But the narrator Richard Reed (I really liked him in the Cursed City narration) dit a great job and I didn’t mind rewinding.

If there would be a sequel I would definitely listen to that as well.

I have never seen a man take so many L's in his life/unlife.

The Hollow King is a story set in the Age of Sigmar universe that can be enjoyed without any prior knowledge of the setting.

Watch Cado, an undead vampire king, be relentless bullied on his quest for vengeance, beautifully narrated by Richard Reed.

It was my first ever AoS story, Richard did a fantastic job narrating the story and being life into the characters

Give me Hollow King

A typical Warhammer: Age of Sigmar story, decent enough but slightly cumbersomely written. I admit that this is one of the better stories and it left me want to read/listen to more adventures of the Hollow King. If you want to start with a Warhammer book in the Age of Sigmar setting then this is a good one to go with.

Absolutely loved this story. Can't wait to hear more of the Hollow King. There was a point near the end (I won't spoil) which gave me full body goosebumps.

Tenuous link between Cado and the plot

The beginning of the book captured my interest quite well with the world building, the way the underworlds are explored and Cado's introduction were good and had me invested, however, once in Aventhis the story takes a dip due to the simple fact that Cado's link to the plot is tenuous at best. The reason given for Cafo going along with the plot felt weak when faced with the plethora of abilities he has as well as the fact given his long age and general disposition to humans it makes very little sense why he stayed or helped, I feel if Cado was younger and struggling more with his connections to humans it would have worked better. Either that or have a more tangible reason for him staying to help.

Other than that, Richard Reed is a fantastic narrator as always and made getting through this story more manageable.

A lot of different factions represented in this book which in my opinion is really cool. Interesting story. Good characters liked it a lot. I hope the storyline continues.

Too many flashbacks. A weak, puny hollow king, until the last chapter where he kills 2 armies by himself. Pointless meandering for like 80% of the book. No real reason to care about the main character or his goals. Enemies who are simpletons. A 5th grader could write a better story. The narrator is fine.

Subversive and Intriguing Until The End

What begins as a seemingly predictable story twists and turns along a winding path. John French uses stock characters all over, but either tweaks their usual characterization just enough that they feel fresh, or uses them to set up another lie within the plotting of Tzeentch. Richard Reed's performance varies somewhat in quality, from stereotypically lower class English accents to Eastern European ones that become somewhat grating by the end, but I have to say that as Valentin the Blacksmith, he really shined. In one particular scene, which I won't spoil, he pours an incredible amount of passion into the character's voice that I wish was displayed elsewhere. However, his voices were believable enough, and the story compelling enough, that there were very few scenes that I found uninteresting.

All-in-all, a great Warhammer story that doesn't depend all that much on your prior knowledge of factions, lore, units, etc.

One of the best aos stories i heard… really love the feel of cado.. and the voices are great

a fun listen. narration great as always. a very Warhammery vampire book, but more of spin on a hero.

Loved it, its basically Dracula meets lord of the rings, definitely a must listen highly reccomend

Not engaging and too long.

I couldn’t finish the last 30 minutes. Life is too short for bad books. Well, maybe bad is too harsh. I just didn’t care how it ended. I didn’t really care how it went the entire way. Cado could be a fun pulp hero for episodic adventures, but in this format it just isn’t great. Maybe AoS just doesn’t make for good novels.

Best Age of Sigmar book yet!

Absolutely loved this book and hope there will be several more to come. Richard Reed was phenomenal as always. Well worth a credit for any fan of high fantasy.

greatest vampire in the land

this is my first age of Sigmar book, just fyi.
i know almost nothing after the end times, so getting glimpses into how this particular land is split is awesome.
the character is told in a good way and he sticks to his flaws (a vampire would call it a flaw) and his story evolves in a great and natural way.
the voice actor is great as usual (heard a lot of 40k books narrated by him).
his female voices are distinct from males and for any voice actor that is enough when it comes to voices opposite genders.