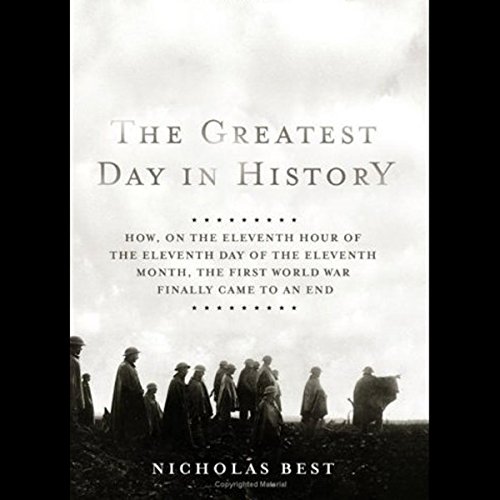 The Greatest Day in History

By: Nicholas Best
Narrated by: John Haag
Try for £0.00

World War I did not end neatly with the Germans' surrender. After a dramatic week of negotiations, military offensives, and the beginning of a Communist revolution, the German Imperial regime collapsed. The Allies eventually granted an armistice to a new German government, and at 11:00 on November 11, the guns officially ceased fire - but only after 11,000 more casualties had been sustained. The London Daily Express proclaimed it "the greatest day in history".

Nicholas Best tells the story in sweeping, cinematic style, following a set of key participants through the twists and turns of these climactic events, and sharing the impressions of eyewitnesses, including Adolf Hitler, Charles de Gaulle, Harry S. Truman, Anthony Eden, and future famous generals MacArthur, Patton, and Montgomery.

"What might have been merely a kaleidoscopic series of vignettes is given shape and focus by Best's skill at paraphrasing the narratives and synergizing the experiences of those who lived through the greatest day in history, knowing they had survived the deadliest war up to then - and suddenly asking, What happens now?" (Publishers Weekly)
"The sense that the last four years could not be repeated is very strong among these witnesses, except for a certain Adolf Hitler, who feels that Germany has to try again. All expanding WWI collections need this book." (Booklist)

What listeners say about The Greatest Day in History

Great Book, shame about the narration

This book was written by a Brit and should have been narrated by one. The American narrator sounds strange talking about a car's 'bonnet', instead of the 'hood', or sounding a jarring note by saying such things as 8 November, instead of the more Anglicised 8th of November. That said, the book itself is fascinating and wide ranging, wide ranging and bringing in all sorts of details such as the impact of Spanish flu, or the fact that Germany teetered on the brink of becoming a Socialist republic, using the USSR as a model. Best also brings in a large cast of characters, all of whom were contemporaries - Bertram Russell, Vera Britain, Oswald Mosely, Ghandi, Marie Currie, Hitler and so on. So, well worth getting and would repay repeat listening, even if the American accent grates a little.

Sometimes, when I read a really powerful book, once in a while I am so deeply affected by it that I can't get some particular scene out of my head because it horrifies me like I was really there. This book did that for me, and in that sense it was extremely successful at capturing the reality of the First World War.

The wide variety of stories being told in this book gave me a new perspective on the First World War. Hearing from ordinary people - telegraph operators, nurses, prisoners of war, and conscripts - along with the people with large looming destinies and the most important people at that time really helps you see the war through the eyes of the people who experienced it. And it is not pretty. Certainly you learn in history class about the misery of trench warfare and shellshocked veterans, but this book contained details about how both sides treated prisoners of war, civilians, and each other that might make you ill. Some of them certainly made me feel sick. There were some heartwarming stories too, about illicit kindness to prisoners of war by "enemy" civilians, post-armistice fraternizing of opposing troops, and bravery and sacrifice. But the tone of the book overall is not uplifting - just the opposite. It is morose and gloomy. The people who know the most about what is going on - Lloyd George, Wilson, Clemenceau, etc. - are not out celebrating in the streets with the average person and are often concerned that this is not the last they will see of a war with Germany. I suspect some of that is historical bias, to see the Second World War everywhere on November 11, 1918, but it is true that the point of view of civilians was very different from the people in charge on Armistice Day.

I really appreciated the fact that this book, unlike a lot of books about the world wars, was not pretty much exclusively about Americans or possibly the Americans and the British. Nothing annoys me more as a Canadian to try to learn about these conflicts and hear nothing except the American point of view. This book talks about Serbians and Italians, Canadians and Indians, Australians and New Zealanders. Although there is a clear thread about the development of the armistice that ties it all together, it is a much more diverse series of stories that celebrates the achievements of many different participators, combatant and non-combatant alike.

I thought the narration was okay. I can't decide whether the fact that it was very matter-of-fact even about the more disturbing details was a good thing or not. And, because I am picky about it, the French pronunciation made my internal French teacher crazy, especially after listening to The Guns of August in which Nadia May pronounced the same words so well.

Overall, I would recommend this to anyone who is interested in getting at the realities of war. I plan to use a lot of what I've learned in my high school history classroom... but in moderation, since some of it is not easy to hear and absorb, especially if you are sensitive to violence. I've had nightmares. It was worth it for how valuable it was to really understanding the war, but nightmares all the same.