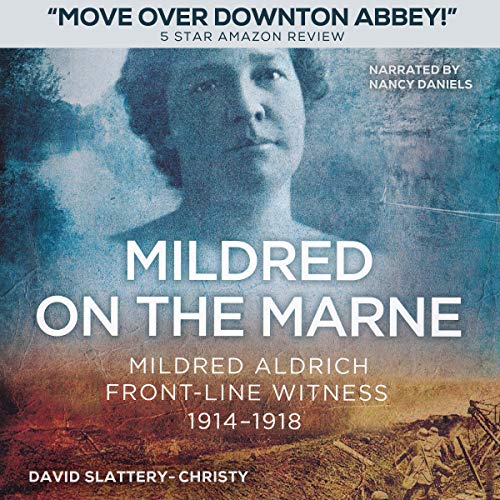 Mildred on the Marne

By: David Slattery-Christy
Narrated by: Nancy Daniels
Try for £0.00

In 1914, an American journalist retired to a small house in France - only to find herself in the middle of World War I, and eventually having an impact on the US's actions in the war. This is the story of 59-year-old Mildred Aldrich and her experiences of the First World War. She retired to a small hilltop house called La Creste in 1914, with views across the Marne River and Valley, little realising that she would become embroiled in the first major battle of the war. In spite of the danger, she decided to stay and help the British and French soldiers. Her home was threatened by the German advance, with Uhlans hiding in adjacent woods; indeed, the Germans marched right up to her house. However, the British and French pushed the Germans into retreat and La Creste remained in safe territory for the duration. The Allies fought the first major battle of the First World War in the Marne Valley and Mildred's 'beloved panorama' turned into the valley of horror and death. Informed by journalist Mildred's unpublished journals and voices of those serving in the BEF, and French and German forces, along with historical military background, Slattery-Christy examines events from the unique perspective of a remarkable woman who lived through them all.

What listeners say about Mildred on the Marne

I had never heard of Mildred Aldrich before but she is a fascinating woman who seemed to be well before her time! Her time in France during the first World War was absolutely enlightening from the point of view of a civilian. I've seen plenty of movies about soldiers and officers of the war but never have I been given a chance to see the war from a resident who had soldiers living on her property during the fighting.

This book is well researched and written and the narration is perfect for what I think Mildred would have really sounded like based on her personality and character; Nancy (the narrator) really brought Mildred to life and gave the words of the book a lot of color.

At the end of this, I really wish I knew Mildred. She sounded like a great friend, a sweet neighbor, and an all around beautiful person. She cared deeply for others and wanted to see change for those disadvantaged and suffering because of society and because of war. We need more of her in our world.