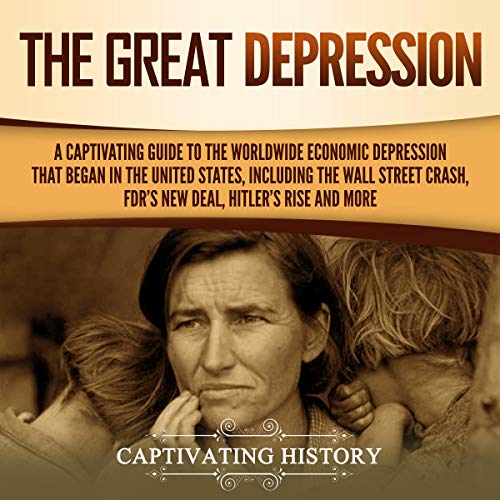 The Great Depression: A Captivating Guide to the Worldwide Economic Depression That Began in the United States, Including the Wall Street Crash, FDR's New Deal, Hitler’s Rise and More

Did you know that the unemployment rate between 1933 and 1934 was one in four people?

The stock market crash of 1929 didn’t cause the Great Depression by itself, but it is a powerful symbolic starting point to the greatest economic disaster of the 20th century. On that dark day in October 1929, fortunes were lost, and fear of financial insecurity rose throughout the United States and the world. In 1932, the low point of the Depression, as much as a third of Americans were out of work, and even more people were unemployed in other countries. The stock market reached its lowest point ever and wouldn’t rise to its pre-Depression levels for almost 20 years.

The scale of the crisis demanded new ways of coping and new ideas about the role of government. The ideas that had dominated American thought about the relationship between the economy and government were now viewed to be outdated at best, dangerous at worst.

This captivating history audiobook aims to give you a better understanding of a period that contains many tragic stories yet powerful lessons.

In The Great Depression: A Captivating Guide to the Worldwide Economic Depression That Began in the United States, Including the Wall Street Crash, FDR's New Deal, Hitler’s Rise and More, you will discover topics such as:

So listen to this audiobook now if you want to learn more about the Great Depression!

What listeners say about The Great Depression: A Captivating Guide to the Worldwide Economic Depression That Began in the United States, Including the Wall Street Crash, FDR's New Deal, Hitler’s Rise and More

too focused on political correctness.

too much focus on blacks. typical " woke" agenda. what possible relevance is Joe Lewis " dating white women. have. or. just on Nd on about " voter suppression"? in the south. 😐 God bless President Trump.

Not what I had hoped for

Wasn't able to finish. I didn't care for the information about movies and entertainment during the depression. The information about Hitler and other countries was abrupt. The story did not flow. I had hoped to learn more about the struggle of the people and how things progressed to those struggles.

Good, basic information on the subject

Straightforward and educational… I’m currently reading The Grapes of Wrath and wanted to learn more about this time in U.S. history… happy this was just facts about the time and not opinions

Book was an excellent overview of the events that led to and out of the great depression. Moreover, the book was limited to approx. 3 hours, having a nice flow (as opposed to sum books going on for 10 - 20 hours) and always kept the listeners interest. Also had very good narration. Highly recommend

would recommend, quick one.

I enjoyed this book tons. It set me down a bunch of different paths to research. also, it was very quick to listen to.

I chose Audible the reader did a good job but, it got extremely frustrating when it kept stopping and returning to the beginning. I would like to hear the book in its. Entirety without having it return to the beginning. Please fix this. Thank, Judy Busby

Just ok. Could be more in depth.

Very high level and quick overview. Would have preferred a more in depth writing instead of glancing over most events.

A Step-by-Step Guide to Eating

It is important, to tell the truth about history and to understand the dark side of human tendencies (CORRUPT GOVERNMENT). The truth must be told to save humankind from suffering. If the truth is not told, then pray for the rapture to hurry up and rescue us!

Could be very beneficial for all Americans to expand on passed their compulsory understandings and moral Bias. It is slightly biased against FDR, but, it is mostly true. FDR was a supersalesman - promoter and always had the masses on his team.

The wild west, the great depression-recession, the civil war, ext, are all areas of knowledge that One of the things this book does well, is boiling the data down to undeniable facts that prove that the answer to the negative effects of a government manipulated market, is not more government manipulation, but the voluntary forces of liquidation and reinvestment of capital towards economically viable and necessary areas.