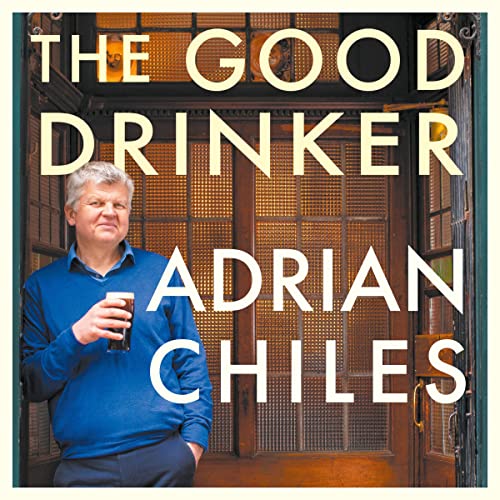 'I've occasionally been asked why it is that I need to go for a drink before watching the Albion play. I've always answered with something lame, along the lines of, "You wanna try watching us sober" ...where does this urge come from? I've raced off to games hours early to give me a chance to drink a lot of beer in a relatively short time...the craic is good, usually. Sometimes it isn't, Occasionally it's all rather boring. But I always make the effort. Why? Well....'

The popular broadcaster and columnist sets out to discover the unsung pleasures of drinking in moderation.

The recommended alcohol limit is 14 units a week. Adrian Chiles used to put away almost 100. Ever since he was a teenager, drinking was his idea of a good time—and not just his, but seemingly the whole nation's. Still, it wasn't very good for him: the doctor made that clear. If you lined them up, Adrian must have knocked back three miles of drinks. How many of them had he genuinely wanted? A mile?

There's an awful lot of advice out there on how to quit booze completely. If you just want to drink a bit less, the pickings are slim. Yet while the alcohol industry depends on a minority of problem drinkers, the majority really do enjoy in moderation. What's their secret? Join the inimitable Chiles as he sets out around Britain and plumbs his only slightly fuzzy memories of a lifetime in pubs in a quest to find the good drinker within.

What listeners say about The Good Drinker

Millions will relate to book

Really enjoyed it and use to have the same high units intake the Giles use to have, will let my wife listen now as she still does drink have over 60 units per week, hopefully her relationship with Alcohol will now change

My 14 to 18 units a week seems poor.
Great to listen to someone else’s life story, glad he’s cutting down. Fascinating to listen to.

This is such a refreshingly different take on drinking. Adrian really tells a great story, with lots of interesting facts and observations. I would recommend this book to anyone who has read lots of self help books. It provides a great alternative to the kill or cure method. Thanks Adrian.

It spoke to me

I haven’t seen Adrian’s tv documentary but was interested in the premise of cutting down not stopping. It is a very easy listen and is full of great ideas about how to challenge your thinking and moderate the amount you drink. I won’t have that ‘anniversary’ he talks about but I hope that, from here on in, I will be able to drink in the manner I would like to see myself doing. So far, in the week I have taken to listen to this book, I seem to have stopped totally but don’t really want to do that! It just highlights, so far, how many of my drinks were unnecessary. Thank you, Adrian!

Refreshing as the first lager on a summer’s afternoon

As someone who has had a 46 year, often heavy drinking career I thought I’d take a punt.

Initially very cynical about the 14 unit per week safe drinking level I was pleasantly surprised.

Adrian shares much of his life in a candid way, delivered in his Brummy accent.

A great listen and empowering.

Very relatable and if you want inspiration to take control of your drinking this book is fascinating.

This book will change my life.

Great book approaching the issue of the love of drinking, the mindlessness of drinking and real ways you can do it differently. Brilliant, moderation is the future for me.

Absolutely loved this and was nodding along to everything Adrian mentions.Very inspiring read....now off for a pint,only the one mind😉🍻

I found this a fantastic book and Adrian’s experience one of which is almost a carbon copy of my own, from excess to realisation that I’m the excess was pointless.

It is a non judgemental, non preaching, just the experience of how Adrian cut back his drinking and the evaluation process over time that lead to that.

really good mentality, thank you worth while and not the idea of stopping completely which will never work for me

Quite Brilliant and Much Needed

I loved this book. Apart from the facts that it was beautifully written, exquisitely honest and a really good listen, I believe it has given me the motivation and the techniques I need to reframe my drinking habit. Thank you Adrian Chiles.