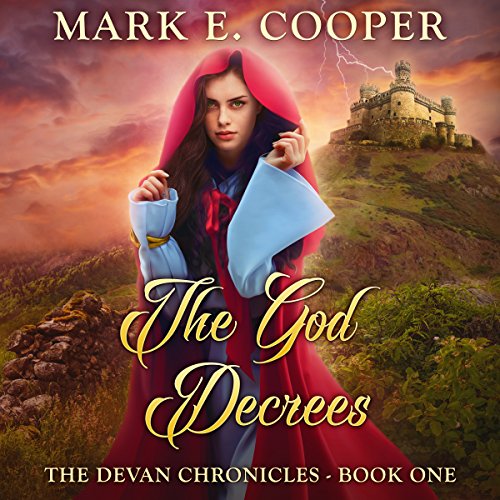 By: Mark E. Cooper
Narrated by: Mikael Naramore
Try for £0.00

Julia is a strong-willed Englishwoman who knows what she wants, and she's working hard to achieve it. An Olympic gymnast, she's training hard every day in preparation for the upcoming games when tragedy strikes, and her world ends with a phone call. Her parents have been killed in a senseless car accident, killed by a drunk driver. Suddenly everything is different. Alone now but for her best friend and coach, she struggles to put her life back into some semblance of order by returning to her training, but the excitement and anticipation she once felt are missing. She's just going through the motions. One night while alone in the gym, something extraordinary happens, and her life will never be the same again.

On another world vastly removed from Julia's, a feeble king sits upon the throne of Deva, and traitorous lords scheme to take it from him. Only the lords of the four great fortresses remain vigilant and loyal to the kingdom. Deva seems doomed, as the legions of the Protectorate march. Lord Keverin of Fortress Athione is desperate to save his people and the land he serves, but magic has long since waned in Deva's people. He knows that without a sorcerer of their own to oppose the legion sorcerers, he's doomed to failure. He needs a champion, one strong enough to throw back the minions of the evil sorcerer Mortain, but where in all the worlds will they find such a man?

Only Darius, a good friend and powerful wizard, might know the answer. Without orders or the guidance of the king, he asks his friend for a solution and embarks upon a course that will surely see him damned by many. A spell is cast to bring a champion to his aid, but something goes wrong, and Julia Morton suddenly finds herself stranded on an alien world with no friends and no way home.

What listeners say about The God Decrees

Would you listen to The God Decrees again? Why?

I would definitely listen again
a great story with great characters

What does Mikael Naramore bring to the story that you wouldn’t experience if you had only read the book?

Mikael Naramore is an amazing narrator and brings the world to life and breathes life into the written characters - he really is one of the best !

This is a great book well written and brilliantlying narrated and a great start to the series - I'm looking forward to the rest !

This is an epic tale of magic and war.A girl is transported from her 21st century home to a world where a powerful mage is needed,and so it goes.
This book is well written.The storyline,while familiar takes fresh turns and keeps ones interest.The narrator,Mikael Naramore did a wonderful job with the material.His voices and sound effects were spot on.

I enjoyed the audio book but not sure if I'd been reading I wouldn't have left it as slow in parts. Julia as the main character was often annoying and weak. Bought on Amazon audio and was a long book so was great for car journeys. Probably would not buy the next one or re hear this one in the future.
3 star average.

Would you consider the audio edition of The God Decrees to be better than the print version?

Havent read the print version ... yet

What was one of the most memorable moments of The God Decrees?

Have you listened to any of Mikael Naramore’s other performances before? How does this one compare?

Fantastic as always ... he is by far my favorite narrator

It's like Lay's potato chips, cant pick just one

Cant wait for book two, please tell me there will be a book two!

I'm a fan of this type of story in which someone from our "real world" gets transported to a fantasy world with magic--one in which he or she can work magic. It's my escape from reality. The characters are interesting and real and well-written. The story kept my attention and Cooper made me care enough about them that I wanted to keep listening to know what happens to them.

What made the experience of listening to The God Decrees the most enjoyable?

The story and characters.

What other book might you compare The God Decrees to and why?

Actually there were so many, it was hard to choose just one, so the conversation between Jessica, Julia and magic.

Wowzer, this is awesome!

Loved the book and story! Can’t wait to listen to more, but sadly that isn’t an option S the rest of the series isn’t in audiobook. :( And the author didn’t finish the series, ugh.

I have listened to every book written by Mark E. Cooper, and I have enjoyed every single one of them. The narrator once again has done an awesome job. Unfortunately, I now have to wait for the author to write another book.

I expect better characters from Mark Cooper. The main character was more plain than oatmeal, less depth than a puddle on the sidewalk. My cat learns from his mistakes more readily than 'Lady Julia.'

I will not be buying the second book in this series

The beginning of this book hooked me. Then, and I know I'm in the minority here, it lost me. I found myself wishing that the characters would stop talking so much and get on with the story. There were several story lines, and I had trouble keeping up with each one in audio. For me, the most difficult part of this audiobook was the narrator's female voices. I found them irritating and old. I did receive this book in exchange for a review. I really wanted to like it much better than I did.

Good, but not outstanding

As someone who has been reading fantasy for several decades, this book falls clearly (and this isn't a spoiler) into the "person transported to another world who can do magic" category. The characters are likeable enough, but it feels like there isn't a tremendous amount of depth. There are large jumps in time, and it sometimes feels like a leapfrog from one action sequence to the next. The balance of power doesn't seem ... well ... balanced. It was an enjoyable enough read, and I will listen to the next one when it's out, but if another series produces a sequel first, this one will probably not be the first on my list.

What did you love best about The God Decrees?

What other book might you compare The God Decrees to and why?

I don't know, it is a little science fiction and a little historical romance

he was easy to understand and the book flowed easily and fast. I listened to it on a car trip and heard the whole book in one sitting.

I think when she learned that she could heal people

I haven't found a book by Copper that I haven't liked yet....I get lost in his creativity. I find his world's fun and entertaining. I look forward to listening to more of his work.