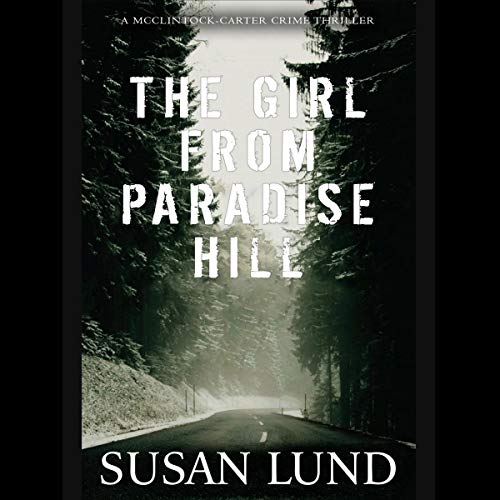 The Girl from Paradise Hill: A McClintock-Carter Crime Thriller

Tess returns home to bury her father, but what she finds buried in his attic makes her question everything she thought she knew about the mild-mannered trucker....

The seemingly idyllic mountain town harbors a dark secret: Four young girls have disappeared over a 40-year period. With no crime scenes, no leads, and no suspects, the cases have gone cold.

The remains of one missing girl are discovered in a burned-out cabin at a remote campsite, reopening the case and suggesting the worst may be true - a ruthless child killer is operating in Washington State.

Crime reporter and amateur cyber-sleuth Tess is obsessed with the cold cases of missing girls in Washington State. As she works to settle her father's estate, she's shaken to her core when she uncovers evidence pointing to his involvement.

On leave after solving a particularly heartbreaking case of child abduction and murder for the FBI's Violent Crimes Against Children Task Force, Michael is back in Paradise Hill to recover and visit with family. Despite doctor's orders to stay clear of police work, Michael's drawn back in when Tess asks for his help understanding the secrets found in her father's attic.

Having escaped justice for decades, he's bored and deliberately stirs the pot, revealing the body of one of the dead girls. Despite the fact he's hiding in plain sight, no one suspects that he's really a wolf and not the sheep he pretends to be. He sees Tess and Michael's involvement in the case as a challenge and views Tess as a temptation he can't resist.

Desperate for answers, Tess and Michael join forces to track a killer and uncover the secrets Tess finds in her father's attic. Will the answers bring Tess peace or shatter her?

What listeners say about The Girl from Paradise Hill: A McClintock-Carter Crime Thriller

After Tess' father dies she has to go thru his house and get it ready to be sold. Which is a hard task due to the murders over the years in the area, mainly young girls from 10 to 13yrs old. Tess is determined to find out who did all these murders. I like that some of the chapters are from the POV of the killer, they don't tell you the guys name but it's different. What grabbed my attention was the child murderer, you just have to find out what kinda asshat was killing little girls. I like Tess, she's nosey like i am but then again she is a journalist. This is the first book in a series and of course i will have to or listen to the rest. Check out Susan Lund, hopefully you'll like her too.

Enjoyed this audio book very much from start to finish great story line too
I was voluntarily provided this free review copy audiobook by the author, narrator, or publisher.

One book, Ok; 3 books, definitely not

The book has a decent plot and should have been completed in one book. I was aggravated that the story was going to drag on for another 2 books. I will not be buying books 2 or 3. ( Had the set been bundled like the 4 novel set “Black”, I would probably have listened to books 2 & 3.) However, at the conclusion of book 1, I was pretty much done being interested in the characters or their future fate.

I listened to this story at 1.25 & 1.50 because the narrator sounded better at a faster pace. The overemphasis was not as noticeable.

Susan Lund accomplished so many right things that the wrong ones become glaring. She constructs an engaging story, however grisly where the reader is sickened and waiting for discovery and justice for a small town serial killer. But she doesn’t trust her readers to fill in gaps and remember what’s she’s already told them, and tends to s lot of repetition where dialogue isn’t even changed or enhanced from what readers had already read two, three or more times.

The real story cliffhanger is more about Tess and her father, and once we know more about that we hang on go find the facts.

The love story is very underdeveloped and would have given some emotional depth to the story had it been fleshed out—no pun intended.

The story is a Book One and I’m not sure about continuing. My motivation would be more to see the author improve her style than sitting through more tedious dialogue and dark, sick lives.

The conclusion surprised. Not sure if was emotionally satisfying enough for the read/listen.

George Kuch does a good job narrating. I’m a Philadelphian and his accent brought me back to my roots.

Not my cup of tea.

George Kuch is a good narrator.