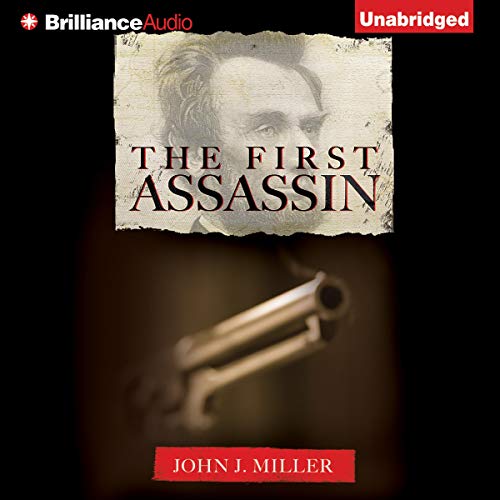 By: John J. Miller
Narrated by: Kevin Stillwell
Try for £0.00

Washington, D.C., 1861: As the United States teeters on the brink of civil war, Colonel Charles P. Rook organizes security in the nation’s capital and monitors the death threats pouring into the White House. He surrounds Abraham Lincoln with bodyguards, covers rooftops with sharpshooters, and investigates rumors of conspiracy fomented by secessionists. Yet amid the chaos and confusion, a mysterious killer slips into the teeming city.

Hired by a wealthy Southern planter to eliminate President Lincoln and destroy the Union once and for all, the assassin catches Rook’s attention by cutting down anyone who gets in his way. As the bodies begin to pile up, Rook realizes he is caught in a dangerous game of cat and mouse with a cold-blooded killer who will stop at nothing to complete his mission. Rook’s only hope is Portia, a runaway slave who holds the key to the assassin’s identity - if she can stay alive long enough to deliver it.

Packed with dynamic characters, rich period detail, and a chillingly sinister villain, The First Assassin is a riveting thriller for fans of historical fiction.

What listeners say about The First Assassin

"For people who like this sort of thing, this is just the sort of thing they'll like" - Book review by Abe Lincoln

You'll need to be patient and stick through the first 1/4 of this book- in the beginning there is quite a bit of "explaining the situation" by Miller, and not a lot of showing. It's obvious the author has a rabid passion for historical fact, so it takes him a while to settle into his tale.

That said, if you stick with it, you won't be disappointed. Miller does a fantastic job of setting the stage and presenting his characters. Eventually he seems to hit his stride and is better able to share the historical tidbits naturally in the course of the story. Well worth a listen.

I found myself really enjoying this book. The author does a wonderful job of storytelling and building up the plot, but I thought he could have done a little bit more to bring it to life by describing the sights and sounds a bit more to bring them to life. The characters are interesting and enjoyable. The pace is a bit slow but that just helps to bring the story to the forefront.

Mr Stillwell does great on his pacing and characterization I really enjoyed his narration.

This book deserves a sequel!

I have read extensively on Lincoln, including several other books of historical fiction about his life. This novel certainly ranks with the best of them. The premise was plausible, the characters were engaging and the plot kept me guessing until the last page. I did not want it to end. I grieved at the loss of beloved characters, and I cheered inwardly when the arrogant Colonel Locke was revealed to be the snake that he was. Kevin Stillwell was a superb narrator. His characterizations were spot on. I would love to hear again from Colonel Rook in a sequel. Violet Grenier still apparently has other tricks up her sleeve.

Play it at 1.25x and it sounds normal

Enjoyed it overall; I found the narration a bit to slow, as was the plot, but the narrator handled the accents and characterizations very well, and the author did give a convincing sense of the location, notable landmarks make appearances without feeling forced, and the writing felt reasonably period-appropriate.

My only annoyances were that it felt unfortunately predictable, and developments that seemed obvious were often reiterated without adding anything to the narrative.

Regarding the production; there's a wide dynamic range here, so headphones or a quick volume adjustment might be needed. There's also no pause between chapters, which is jarring but never really confused me since the change was obvious.

Would you try another book from John J. Miller and/or Kevin Stillwell?

Yes, after reading reviews and did some research I would try another. I listened as much as I could but I couldn't finish it. I wanted to love it because I love Lincoln. The narrator was very good. I just could not finish it.

Would you be willing to try another book from John J. Miller? Why or why not?

Which character – as performed by Kevin Stillwell – was your favorite?

He was a very good narrator. I would listen to another of his books.

Do you think The First Assassin needs a follow-up book? Why or why not?

Great story and performanc. Recommend to any history lover. pay attention as the story jumps around.

The editing just needed to be better. There is not enough gaps in between the transitions.
Some of the sentences just run from one to another without a pause.

It is hard to understand when one chapter ends and the next starts. Would be nice if the narrator took a breath. But excellent performance never the less.

Don't Dismiss It Without Consideration

If you could sum up The First Assassin in three words, what would they be?

Several reviewers gave up on this book because they were not interested in what they called an "historical novel." The book did admittedly unfold slowly at first as the author attempted to place the reader in the proper historical time setting.

I personally would not consider it so much an "historical novel," but simply a story that takes place at the time of Abraham Lincoln becoming president and the days leading up to the civil war. I felt the author sought to help the reader understand the context of the story, as any writer using any period in history would do. It is a thriller set in the early days of the civil war, and not a history lesson.

If you don't give up on it, you may find it a good read.

Maybe someone more interested in historical politics would enjoy it

Yes but it just wasn't for me.