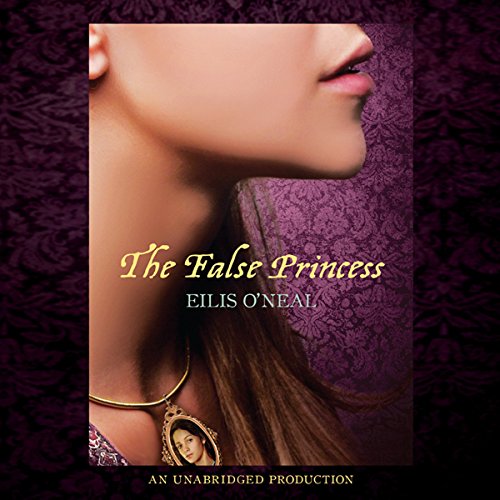 By: Eilis O'Neal
Narrated by: Mandy Williams
Try for £0.00

Princess and heir to the throne of Thorvaldor, Nalia has led a privileged life at court. But everything changes when she learns, just after her 16th birthday, that she is a false princess, a stand-in for the real Nalia, who has been hidden away for her protection. Cast out with little more than the clothes on her back, the girl now called Sinda must leave behind the city, her best friend, Kiernan, and the only life she's ever known.

Sent to live with her only surviving relative, Sinda proves inept at even the simplest tasks. Then she discovers that long-suppressed, dangerous magic runs through her veins, and she realizes that she will never learn to be just a simple village girl. Sinda returns to the city to seek answers. Instead, she rediscovers the boy who refused to forsake her, and uncovers a secret that could change the course of Thorvaldor's history forever.

An intricately plotted and completely satisfying adventure, The False Princess is both an engaging tale in the tradition of great fantasy novels and a story never told before that will enchant - and surprise - its listeners.

What listeners say about The False Princess

First of all, I wanted to let you know that this book is actually way better than it sounded or looked. This had been the most refreshing YA novel I've listened to for a very long time. I'm sure people in any age would enjoy it tremendously. I wasn't sure about it at first because I usually read YA paranormal romance, but when I saw the review on Amazon.com, I decided to take a chance. Turns out to be a fantastic decision. There's mystery, friendship, romance, heartbreaking betrayals........So much unexpected twists and turns. I personally had so much fun listening to it that I finished it in one day. I simply cannot find anything to criticize about this book, and I don't think you will be able to either.

I was pleasantly surprised at how much I really enjoyed this book. I loved all of the characters and how the narrator brought them to life. This is a standalone book and although the story was resolved I really was left wanting the story to continue. Not because the story was lacking but because it was such a good story that I wanted it to continue.

Good Narrator and an entertaining story

i liked the story very much i was looking for this kind of historical fiction and it is refreshingly new .. the narrator voice was clear but was a little bit slow .. i liked the book very much

A chance worth taking!

Would you listen to The False Princess again? Why?

What was one of the most memorable moments of The False Princess?

I loved that she was brave and eager to do teh right thing, even when the King 7 Queen turned their backs on her!

Well performed, and a good listen overall. With all the confusion of babies switched at birth, the question of royalty and identity, magic and intrigue, I quite enjoyed the story... right up until the end, when the plot twist that I'd been anticipating failed to materialize. The twists and turns provided - quite regularly, and appropriately, given the subject material - were all thrilling, but the final twists had all been laid out by 2/3 of the way through the book with nothing to follow at the ultimate climax. I kept listening thinking, 'How is this going to end? With three hours left to go, there's bound to be SOME twist; I bet it's ____. She can't have laid out the final bit ALREADY, there's too much story left to go!' The story had me completely involved until the very end, which tells you how good it is, but the ending fell somewhat flat, the apogee having been attained far too soon. Still, worth a listen.

I don't know that this fairytale is based on any other. I didn't recognize it. It was really a great story and I was up late listening, even though I know I should have gone to bed. I just couldn't quite tell how they would be able to pull off their task in the end. I enjoyed the characters and way the characters changed and grew. What a sweet love story!! This is a perfectly lovely escape. Well worth my credit. I'll listen to this again. The narrator was very good and I wouldn't hesitate to listen to another she narrates. Just loved it all the way around.

This captivating story relies on old-fashioned art and character development to carry it rather than just "sex" - sexual tension, intrigue or any other form. I found it to be a very sweet and compelling story about a young woman discovering her true identity and a new path in life; and reaffirming true friendship and love. Excellent narration which seemed to be just right for the character.

The False Princess was overall, enjoyable. However, I had a few issues with it. To start with, the narrator took some getting used to... but it WAS possible to get used to and even enjoy listening to her. She has kind of an Australian accent (I could be wrong about that), and lisps a couple times (intentionally I'm sure). It may have been easier to get used to her if the storyline didn't drone on though. Personally, I like books now and again that are rather slow, where much time is taken listening to the character's thoughts, etc. But for those who like action-action-action, this book may be a bit disappointing at the start/middle.
About half way through the book began to pick up speed with various plot twists (loved 'em!), sometimes so much so that I'd have to go back and re-listen to figure out WHAT was happening. I noticed that a few times the story would speed up, then slow down, then speed up.
Toward the end, I had a much better feeling about the book, I liked the wrap-up, I enjoyed how it played out for all the characters. There was a great deal of character development, not just for the main character but for side characters as well. There were some parts of the book that I REALLY enjoyed, and now that it's finished, I look back on it fondly, glad to have listened to it.
As a side note to parents, or those listening with children: this book doesn't really swear, per say, but in the book the nation worships the "nameless god", and (even though he's nameless) the characters use his name in vain quite often, as an exclamation of surprise, disgust, etc.

Where does The False Princess rank among all the audiobooks you’ve listened to so far?

Very nice story about a young girl facing drastic changes in her life. She also finds friendship, love and magic!

What was one of the most memorable moments of The False Princess?

When she finally finds her power

Have you listened to any of Mandy Williams’s other performances before? How does this one compare?

I haven't listened to any other of Mandy William's work, but she has a lovely, easy to listen to voice that added to the story.