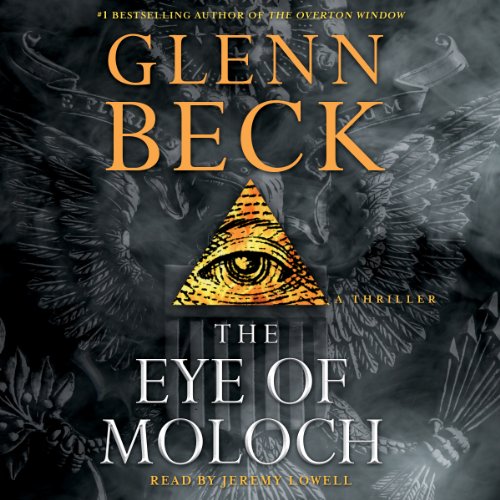 The Eye of Moloch

By: Glenn Beck
Narrated by: Jeremy Lowell
Try for £0.00

THE LAST BATTLE FOR FREEDOM IS UNDER WAY…

By the end of Glenn Beck’s #1 best-selling political thriller The Overton Window, a young rebel named Molly Ross had torn aside the curtain to reveal a shadow war being waged for the future of America. In the six months since then, her fight for freedom hasn’t gone well. Marked as traitors and hunted by ruthless government-sanctioned mercenaries using the most advanced surveillance technologies ever created, Ross and her “Founders’ Keepers” find themselves cornered and standing alone. but the fight is far from over.

The battle lines in this bitter rivalry are as old as civilization itself: On one side, an unlikely band of ordinary Americans ready to make their last stand in defense of self-rule, freedom, and liberty - and on the other, an elite cabal of self-styled tyrants who believe that unlimited power should be wielded only by the chosen few. That group, led by an aging, trillionaire puppet-master named Aaron Doyle, will stop at nothing to destroy the myth that man is capable of ruling himself.

As Doyle prepares to make his final move toward a dark, global vision for humanity’s future, new allies join the fight and old enemies change sides. In the midst of it all, Molly draws together a small but devoted group willing to risk their lives to infiltrate one of the most secure locations on earth - a place holding long-standing secrets that, if revealed, would forever change the way Americans view their rare, extraordinary place in history. Exposing these truths, and the real-life game of chess being played for mankind’s freedom, is their last chance to save the country they love.

What listeners say about The Eye of Moloch

I would recommend this book to all.

The entire beginning chapter and how they escaped capture. Chilling executed.

A solid, complex, chilling, political thriller that spins a confusing web of story styles into an all encompassing over view of modern day progressive liberalism and the truly evil agenda that it encapsulates.

I bought the audio book version of the book today from Audible and listened to all afternoon. I have to say that over all the book is pretty entertaining, chilling, and somewhat interesting. However it had a rather blatant disjointed, haphazard, mufti-authored, disconnect to it that made it very confusing to listen too, let along, I assume, to read. While I found the story to be chilling I also found that the way in which it was assembled had me wondering if I had missed a few chapters of the previous book, The Overton Window.

To me the book seemed filled with chapters that were well written, enjoyably suspenseful, insightful, yet seemingly written by many different authors. This effect brought a sincere sense of confusion to the over all flow of the story and to the book as a whole.

While much of the book was filled with political insight into the minds and ideology of hard core progressive liberalists, a significant portion delved into what I thought to be the heart and soul of those involved in the events encapsulated by the story. The book can be summed up as; A truly chilling mosaic of current political events spun out of control by agents of willful chaos and those who are caught up within the struggle and those who choose to just "ignore" the reality that surrounds them. Freedom is nothing more than what we are given by those who know there is no freedom but what freedom they grant to us.

All in all this is a good political thriller written in the multiple story telling styles of Vince Flynn, Brad Thor, and Glenn Beck. A truly chilling tale of the evil that is modern day progressive liberalism and how it is progressing through the body of liberty and killing it from within. Apart from the disjointed feel of the story, the over all story is outstanding and relevant to the issue we are facing in today's world. A solid book worthy of a place on any ones book shelf.

The story exceeded my expectations. Suspenseful, riveting, shocking, with an eerily prophetic tone. I highly recommend it.

Not a bad listen at all

I enjoyed it - if you lisen closely Mr Beck threads in real life events into the fiction.

This was way too much of a libertarian rant. I'm "antifederalist" but I listen and read books to be entertained. I detest books that use fiction as a platform to spew rhetoric

Has The Eye of Moloch turned you off from other books in this genre?

Disappointment that all it had to offer was a political rant.

I understand politics enter into books and make stories interesting and exciting. But such an obvious rant from democrat, libertarian, republican is just annoying and not at all entertaining.

Didn't want it to end

Makes you wonder, if this could really happen. A riveting story, very well written and researched.

This was rough. Even read the first one of this series but it just went way out there. Too many giant leaps without telling us how you got there. Don't usually start and not finish but that was the case with this one.

As I listened to this book, I was amazed at how it mirrored today's news. Uncanny. I remember listening to Glenn Beck last summer stating that he was not going to release the book until the time was right. Well the time was definitely right. Took me a little time to get oriented back into the characters from the Overton Window, but once I was in sync, it was fast paced and, as always, an eye opener.

Absolutely thrilling!! Thank you Mr. Beck for the journey you took me on!!

OUTSTANDING Plot and full of twists!!

Loved it. suspenseful, and gets one thinking. Reminds me of the old spy/ political intrigue novelsnof the eighties.