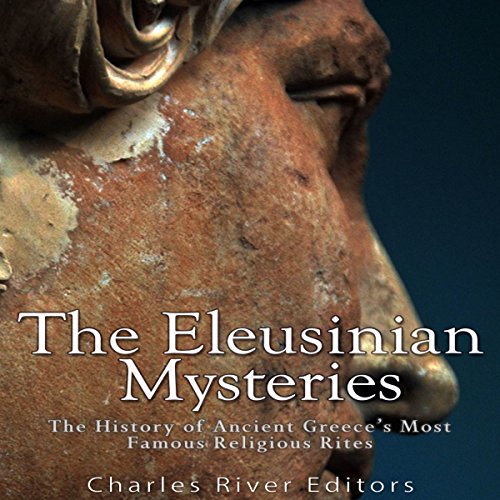 By: Charles River Editors
Narrated by: Kenneth Ray
Try for £0.00

Ancient Greece and its mythology has fascinated people for thousands of years, and few elements have intrigued people quite like the Eleusinian Mysteries, which the Greeks believed transformed the initiates and gave them knowledge that eased both the living of life on earth and allayed fears of death, allowing an acceptance of their ultimate fate. The influence of the Eleusinian Mysteries was also far-reaching; for example, the Telesterion is reminiscent of the labyrinthine, symbolic structures that can be found all over pre-historic Europe, ranging from those in Ireland to Malta and Crete to the Shetlands. The larger precinct of Eleusis, combining as it did caves, terraces and buildings carved into the rock again, all echo that ancient past. The external journey of the initiate is mirrored in his internal journey, and what can be seen is that the spiritual torch of classical Greece, as exemplified in these rites, hides the much older worship of deities. It was the spirit of those older gods and goddesses that ultimately pervaded Eleusis.

However, it would be unwise to see the Eleusinian Mysteries as something separate from the other aspects of the Greek belief system, or even worse, seeing them as somehow more spiritual than the others. The fact that a considerable element of the Eleusinian Mysteries suggests a tendency towards spiritual monotheism has led to many false conclusions about their nature. They were not a unique phenomenon in Greek religious tradition, and the concepts of secrecy and revelation of mysteries only to initiates had parallels in the cults of Dionysius and Cybele. Similarly, the mystical dimensions of the rites, with their emphasis on a personal encounter with the deity, can be found in other cultic activities.

Nonetheless, for the ancient Greeks the vital issue was that only through the Mysteries could they escape the miserable eternal fate ascribed for them if they were not initiated. Sophocles summed it up neatly, declaring, "Oh thrice blessed the mortals who having completed the Mysteries have descended to the underworld for those only will there be a future life of happiness, for the others there will find nothing but suffering."

The rites comprising the Eleusinian Mysteries formed a Panhellenic event that attracted visitors from all over the Greek world, including Sicily and Cyrene. Ultimately, anyone who spoke Greek, male, female, free or slave, could present themselves as a candidate for initiation, provided that they were free of any sacrilege or untainted by a heinous crime such as murder. The Mysteries became the most sacred of the mystical celebrations that took place in Greece, and today the rites and rituals that made up what was a huge event are still the subject of academic controversy and religious debate.

What makes the Eleusinian Mysteries so important for people studying ancient Greece is that they survived for hundreds of years, well into the Christian era. They celebrated Demeter, a hugely important figure in Greece (particularly in both Athenian and Roman worship), and the whole festival was celebrated by the state with pomp. Most of all, however, the aura of mystery that has surrounded the famous rites, and the lack of absolutely incontrovertible information about what exactly went on in some of the most secret parts of the rites, has ensured that they have remained enigmatic and have thus continued to be intriguing throughout history.

What listeners say about The Eleusinian Mysteries

Having studied Ancient Greek history in depth, the Eleusinian Mysteries are frequently encountered but they are rarely discussed at length. This compact text firmly puts the Mysteries in a socio-religious context, one that had international dimensions and not only outlived the Golden Age of Athens, but survived into the Christian era. Writing this review, some six months after I originally listened to the book, I realise I need to plan a revisit.

Not worth a credit or the price

move on, a doctoral thesis is more complete, each concept barely scratched, many better available titles on the subject

Great introductory study on the Mysteries. Well researched and non speculative, and at a great price.