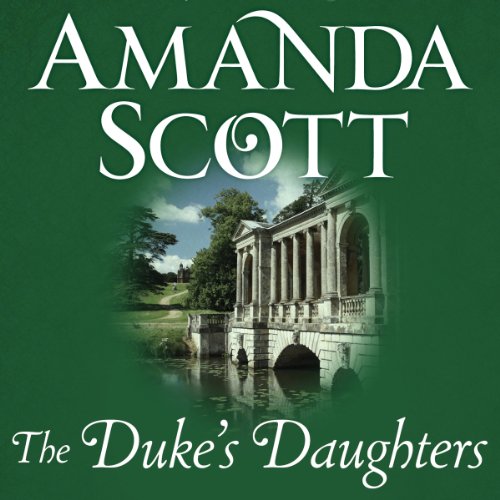 By: Amanda Scott
Narrated by: Helen Stern
Try for £0.00

The Duke of Malmesbury’s daughters discover that passion can derail even the best-laid matrimonial plans.

Lady Cecily is known as the “Ice Princess” because of her cool blond beauty and her refusal to wed any of her several eligible suitors. She has no choice but to obey her father, the Duke, who wants Cecily to marry the one man who can assure the family’s social and financial positions: The arrogant and infuriating Viscount Ravenwood, who has been her enemy since childhood. A marriage of convenience is all she expects from their pairing - she has no idea that Ravenwood conceals a deep secret, or just how determined he will be to claim her heart.

Cecily’s sister, Lady Brittany, is relieved that she doesn’t have to take part in the husband hunt in London’s marriage mart - though as a duke’s daughter, she is considered a prime catch. Comfortably engaged to amiable Lord Anthony Faringdon, she knows that though they may not be a love match, she and Tony will get along just fine - that is, until she meets his best friend, the darkly handsome Marquess of Cheriton, whose eyes pierce her very soul. Brittany’s comfortable life and perfect plans will be overturned by her increasingly passionate feelings for the irresistibly charming Marquess.

What listeners say about The Duke's Daughters

I really enjoy listening to this book ! I certainly will read it again with great plaisure ! Wonderful performance ! I recommend absolutly !

Two wonderful bits of escapism very well narrated. The heroine in the first is ditsy and the fiance in the second a hothead. The stories are sufficiently enjoyable to forgive the extremely bossy and impertinent lady's maids.

I rather enjoyed these stories. The Narrator is pretty good and easy on the ear. Light airy and not too mushy with a spatter of fun.

This is a beautiful story, this author into such detail to describe the goings-on and the surroundings in the story and the homes of the people that live there, with all the detail and research that has been put into this book, it brings the story alive to the mains I.
I really enjoyed the story, it’s beautiful. I am so sorry about my typos, I am visually impaired.

A very neat and well researched story the description of the cloths were very well done. It moved on at a good pace and I enjoyed listening to it.

sometimes long winded but altogether a good enjoyable book. Followed every twist and turn with interest

Lighthearted nonsense set in Regency aristocracy. I enjoyed it as background story telling. Took my mind off doing the housework.

Yet another regency romance that proves...

... there's no equal to Georgette Heyer. The reader gabbled along with no subtlety and the final story in its far-fetchedness just about took the cake. Along the way one male character was so unattractive I'm surprised he had any friends at all and one of Brittany's (Britney? in regency England? - really?) sisters was even worse. the whole story line descended into a farce and I only kept listening because I needed something to listen to while working and it was free

This book is not really for me but maybe it's just the thing for someone else. I do like the narrator.

Is There A Point??

Absolutely nothing is happening. There is no tension . It's like watching someone clip his toenails. Good golly!

This book was just off for me. There was no real conflict, nor any real story. The characters didn't even seem to have any chemistry. The first of the two stories was supposed to include a mystery, but the solution was obvious.

Did Helen Stern do a good job differentiating all the characters? How?

Helen Stern did a moderately good job of differentiating the characters from one another, but I think she needs to work on her male characters.