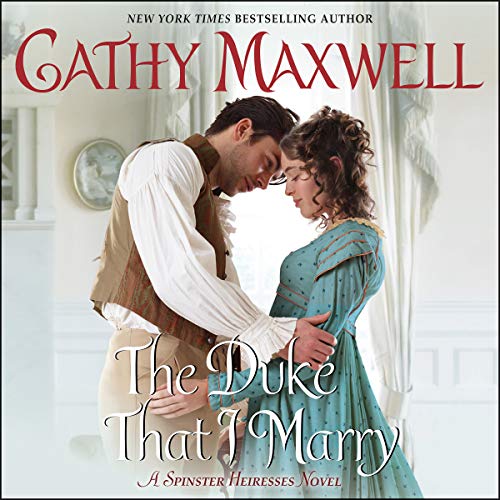 The Duke That I Marry

By: Cathy Maxwell
Narrated by: Mary Jane Wells
Try for £0.00

Once upon a time there were three young ladies who, despite their fortunes, had been on the marriage mart a bit too long. They were known as “the Spinster Heiresses”....

Is it wrong for a woman to want more?

Not if she is a Spinster Heiress. They do not settle. Any young miss would be very lucky to find herself promised to a man like the duke of Camberly. However, Miss Willa Reverly has watched her friends marry for love. Camberly may be the prize of the season, but she will not be “sold” to any man. She wants his devotion or she wants nothing at all.

When is a marriage of convenience inconvenient?

Newly named to the ducal title, Matthew Addison is determined to discover the secrets behind Mayfield, the bankrupt estate he has inherited. He doesn’t have time to coddle a headstrong heiress who is determined to ditch him over something as silly as “love”. Little does he know that his questions will place her in jeopardy. Now, he must do what he must to save them both.

Could it be that in running from danger, they might be racing headlong into a truly unexpected fate: falling in love?

What listeners say about The Duke That I Marry

If it wasn't for the narrator I'd have returned this book. The heroine is weak, whiney and quite frankly the most ANNOYING character I've ever had to endure. I understand that she is naive and pampered, but Jesus Christ, GROW UP!

Mary Janes Wells is an awesome narrator for historical romance novels. She is amazingly good with doing all the characters different voices. No one compares to her. I think the novels would be good on their own but she makes them 100 times better. Love, love, love everything she narrates!!!

Not overly long, so character development, plot etc concise for he genre. Loved the dialogue between characters.

Narrator is a master. She really adds to the experience of the story!

I loved the book. The narrator made it so enjoyable. I didn't have to try to figure out the words.

Great pairing of author and narrator

There is something to be said for the right narrator of a book, when the delivery brings it to life!

Well done. No insta-love, thankfully! Some real heat, not overly graphic, but well done. The Whodunit was a tad easy to reason out. But it was very well done.

The characters in this book are interesting...not complex...but interesting and likeable. The story is a lovey-dovey romance with a little mystery and a few relationship challenges thrown in to add spice. MJW did a a great job as usual in adding humor and personality to the story. This is another keeper for me.

Loved the Duke in this story!

I loved this Duke because he was very compassionate - he was thoughtful, patient, and very kind. Everything she thought about him (all her prejudices) were counteracted by his actions.

A decent story for a long drive, and good narration. Story was predictable, and easy to listen to, but I won’t be giving it a re-listen.