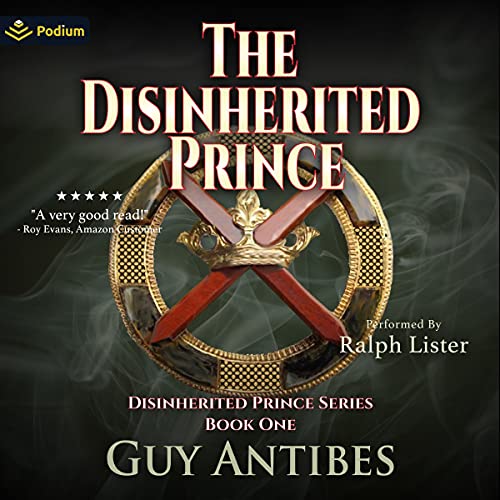 By: Guy Antibes
Narrated by: Ralph Lister
Try for £0.00

Poldon Fairfield, a 14-year-old prince, has no desire to rule - his poor health has convinced him that he will not live long enough to sit on any throne.

Matters take a turn for the worse when his father, the King of North Salvan, decides his oldest will rule the country where Pol's mother is first in the line of succession followed by Pol, her only child. Pol learns he has developed a talent for magic, and that may do him more harm than good as he must struggle to survive among his siblings, who have now turned lethally hostile.

What listeners say about The Disinherited Prince

Starts great but book 3 is um not so good

So I generally don’t give bad reviews but man I was impressed with this series at first. I liked the main characters and some story arch’s but by book 3 things just fall apart. I have not finished the 4th or 5th yet but not sure if I can make it through the 4th if it continues like this. If you like dumb overpowered main characters that do dumb stuff over and over again this is the book for you.

Wish all of the audiobooks i started were this enjoyable! Looking forward to the next book and hope the author kept writing excellence...

Absorbing for all ages

Outstanding story. The author has given us a completely absorbing, intricate tale. It is full of well-developed characters, none perfect, some with abhorrent flaws, others just struggling to be decent in a harsh world. Speaking of which, the world-building is wonderful--and not all the world is harsh. It was hard to stop reading. I am deeply impressed.

The use of patterns as a talent to develop, and related to the magic system, was completely compelling. Even in our world without magic, understanding and anticipating patterns is a vital skill. Just loved how the author meshed it into the story. Well-done!

The main character Pol...I was astounded to read some of the assessments about him in reviews. I thought, far from being a "wimp", he was struggling to find ways to survive in a horrible family situation, and valiantly did just that, with a bit of assistance from the few adults he can trust. His behavior and emotions are compellingly believable and mostly admirable!

I highly recommend this novel to all ages.

was skeptical because so short but well worth it

i usually go for longer books but needed to pick one quickly this time. i am 5 hours into it and definitely hooked. i love books based on magic and a great magic system. so far there is a little bit, hopelfully the magic gets heavier but freat listen either way