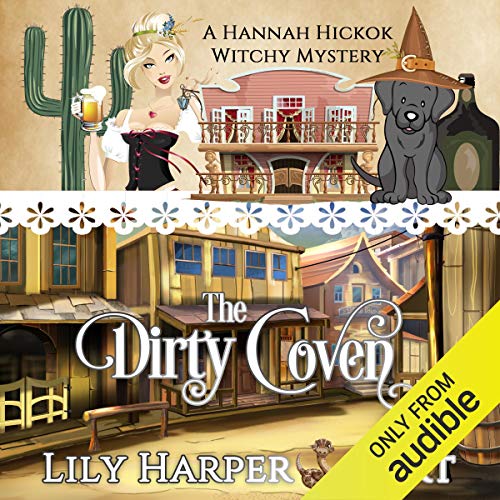 By: Lily Harper Hart
Narrated by: Heather Masters
Try for £0.00

Hannah Hickok is at a crossroads in her life. She’s single, out of a job, and living in an apartment she absolutely hates in a suburb of Detroit. All that changes when she receives a registered letter and finds out she’s inherited a performance town.

Casper Creek is located in Kentucky, on top of a small mountain, and is fashioned after notorious towns from the old west. Workers dress up, man the saloon, and put on a variety of performances several times a day. A city girl, Hannah is out of her element. She’s determined to give it a shot, though.

Cooper Wyatt is head of security at Casper Creek and the last thing he wants to do is break in a new owner...especially one who has no idea about the paranormal world she’s about to be immersed in. You see, Casper Creek is home to a variety of individuals, including two covens of witches who enjoy doing battle.

Hannah is barely in town when a body drops and a mystery unfolds. The workers at Casper Creek have more on their minds than performances. Unfortunately for them, Hannah is about to find out their big secret. Even worse, she’s about to find out she comes from a long line of witches...and magic is in her genes.

Casper Creek is full of colorful people. They’re all going to have to come together if they want to fight pure evil. Will they manage it in time? It’s almost high noon and the magic fight is about to begin.

What listeners say about The Dirty Coven

...I don't think she wrote this. Some of her recent works have been a little subpar, but this one takes the cake. It's like she finally got a thesaurus but can't figure out how to use it. Time after time, she uses words or phrases that are similar to what she clearly means to say but are inappropriate for the context. Common metaphors are worded strangely making them meaningless. Example: "...turned ON her tail and ran". Huh? That really paints a weird picture. I think she meant that the character turned quickly and ran, but that's not how the expression goes and kind of makes it not make sense.

I think it should be noted that the plot, and many of its particulars, are pretty much identical as Witchin' USA.

I decided not to continue with her Moonstone Bay series because there was a little of these types of mistakes in the first book. I couldn't finish Bat Out of Spell for the same reason. Comparing her these recent stories to the Winchesters, the Mystic Caravan, and the Grimlock books, I'm truly wondering if she indeed did write this one or the other bad ones I've mentioned. It's hard for me to believe this book came from the same place as Only the Lonely.

One of the only good things I have to say about this recording is that at least it wasn't narrated by Angel Clark. Though if it had been, I could have saved my time and money because I wouldn't have even considered purchasing it.

the concept wasn't awful but too much time spent on the "setup " for the story and the mystery itself was bland and stale in comparison to the half dozen other stories I've "read" this month. Save your credits for almost anything by Molly Harper, or the DFZ series by Aarons, this one isn't a keeper... sorry!

more awkward budding romance than mystery. the heroine was difficult to like, I don't know if it was the way the book was read, if the writer meant for her to come off as an annoying a-typical millennial or just the lack of character depth all around, but this character definitely would have no female friends if she were a real person, and her male "friends" would be sparse also. won't be reading/listening to any further books with this character.

Molly harper and lily harper has many parallels , in kentucky, “cooper” even grammar. The story is cute but no depth! Very twightlight’ish . Good book for teenagers. The” youre not the boss of me” remarks soo teenager, not mature adult.

The story line was poorly developed and dialogued but, as a series, would have the potential to go somewhere worth following. The narration was ok but also not the quality typically associated with Lily Harper Hart audios. Overall, this was disappointing and not worth a credit.

I was really looking forward to getting into a new series but just couldn't get past the dimwitted main character of the book and the dumb lines. Two hours in and I'm just throwing in the towel. Example: Bar scene - dimwit starts bartending and asks the other bartender what they are supposed to be doing, he answers that they should be serving drinks. dimwit - well I know that silly but what kind of drinks. Um, the ones the customers ordered. She toggles between a wounded confused puppy and a snotty valley girl persona. I've never had so little respect for a made up character.

Glad I tried it

I was a bit reluctant to try this since my only other attempt at an audible book didn't hold my attention. This author was new to me also. This was such an interesting story and the narrator was so good that I was hooked to the point of purchasing another audible before finishing this one. The characters in the story are very believable and the plot had enough turns to keep me wondering. Nicely done.

Great story line, well written, and engaging. Vocal performer is entertaining. Highly recommend! Can’t wait for the next book in this new series.

A great story! Very relaxing and a breath of fresh air. Love the characters and how the story evolves.

A fun and somtimes quite eerie paranormal romance series. I have heard them all. This is my second time through. Good narrator.