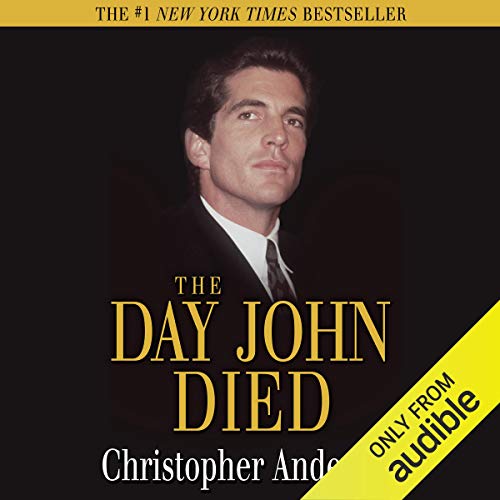 By: Christopher Andersen
Narrated by: Richard Poe
Try for £0.00

"People keep telling me I can be a great man. I'd rather be a good one."-John F. Kennedy, Jr.

Where were you the day John died? Like his father's assassination and the death of Princess Diana, the tragic plane crash that took the life of JFK Jr. on July 16, 1999, is one of the defining moments of our lives - an event that moved us so deeply we will never forget where we were the day we heard the news. With good reason. No other American had lived his entire life in the spotlight - from his rambunctious toddlerhood in the Kennedy White House and heartbreaking salute to his father's coffin to his daredevil Sexiest Man Alive bachelor days and his final years poised on the brink of fatherhood and a brilliant political career.

Now, in the manner of his other number one New York Times best seller The Day Diana Died, respected Kennedy family biographer Christopher Andersen makes The Day John Died available for the first time as an ebook. Andersen draws on important sources - many talking here for the first time - to recreate in vivid and startling detail the events leading up to that fateful night off the coast of Martha's Vineyard. An inspiring, sympathetic, and compelling look at one of the most remarkable young men of our time, The Day John Died is more than just the definitive biography of JFK Jr. It is a bittersweet saga of triumph, love, loss, fate - and promise unfulfilled. It is the story of America's son.

About the Author: Christopher Andersen is the critically acclaimed author of 18 New York Times best sellers, including six about the Kennedy family - Jack and Jackie, Jackie After Jack, The Day John Died, Sweet Caroline, These Few Precious Days, and The Good Son - as well as the No.1 international best seller The Day Diana Died. A former TIME Magazine contributing editor and senior editor of People, Andersen has also written for The New York Times, Life, Vanity Fair, and countless other publications.

"A detail-packed tearjerker…We defy you to remain unmoved." (Associated Press)

What listeners say about The Day John Died

Death and an Amazing Life


This was a comprehensive, fascinating and compelling biography of JFK Jr. While framed around his untimely death, the story of his life was intriguing. I did not know much about him before this book, as I had followed Princess Diana's story. The Kennedy's do indeed seem to be cursed with a great deal of tragedy and I had just finished a book about the Kennedy curse prior to this. Jackie was an amazing mother to her surviving children and she prepared them to handle a realistic life. What is interesting to note is that she seemed to know he would be killed in an airplane accident and had forbid him from taking flying lessons. If only he had listened to her sage advice. What is amazing to note was how good of a man he turned out to be. Despite the daredevil adventure streak, he was empathetic, down to earth and approachable. His good looks and charm dazzled many, both male and female, yet he was not arrogant or condescending. Had he gone into politics, he would have made a wonderful president. He was taken far too soon. I read this book using immersion reading while listening to the audio book. Narrator Richard Poe beautifully brought this book to life. A highly recommend read.

A comprehensive reiteration of the story of John Kennedy Jr death, followed by a retelling of his life leading up to it. Well told, well researched.

Highly informative, well written and researched. The voice of the narrator was calm and had just the right tone and pitch to make the book interesting and a pleasure listen until the end. Loved learning new things about the Kennedy’s , about Jackeline Bouvier and how she doted over her children and was a great force on who they became. But mostly I enjoyed reading about John’s life, his dreams, his struggles and above all his down to earth and high sensitivity towards others , his respect , dignity and goodness as a human being. We lost a great man on that fateful July in 1999. Truly a good man.

The title would lead you to believe that this book is just about his death, but it's not. It begins and ends with his death. In between there's a tale of his life. Not comprehensive, but interesting. There were at least a couple of times in his life when he took risks that could have gotten him killed, according to his cousins, but those incidents weren't included. Possibly they couldn't be verified so the author left them out, which is laudable.

I've read enough on the Kennedys to believe the author did his homework. Well worth listening to again.

The book is less than 10% aboy John's last day and more about the Kennedys that can be found in many other books with more facts and details. There is a lot more information about the investigation and details in the newspapers, than this book about John' last day. However, there is other information about some of John's friends and family that saved this book from being a total disappointment.

This is a fair to middling account of the birth, life, and untimely death of John Kennedy. The material will be well known to everyone of a certain age, and touches on significant aspects of John's life, including his time as the stepson of Aristotle Onassis.

While author Andersen acknowledges Kennedy's restless nature and unfocussed approach to many areas of his life, he speaks of John with a respect bordering on reverence. This reverence extends to Jackie, Caroline, and to a certain extent, John Kennedy Sr., but does not include the Kennedy cousins, children of Bobby and Ethel, whose boisterous goings-on have often led to disastrous conclusions.

Narration is fine, except for Poe's seeming inability to scan ahead of the spoken word and see that the sentence continues on the next line. The result is a choppy moment while he recovers his footing and carries on with the remainder of the sentence, leaving the confused listener to sort out the line of narration.

I cried listening to this book...I lived through the assassination of JFK and RFK...his mother's death...but his death and that of his wife and sister-in-law was so shocking...

This book has literally nothing to do with the story of John’s death - it wasn’t even discussed.

However, he had a full life. The book is good and reminds you of the struggle in life and how it can be overcome. Great insight into his struggle and how he was loved by all. RIP JFK jr.