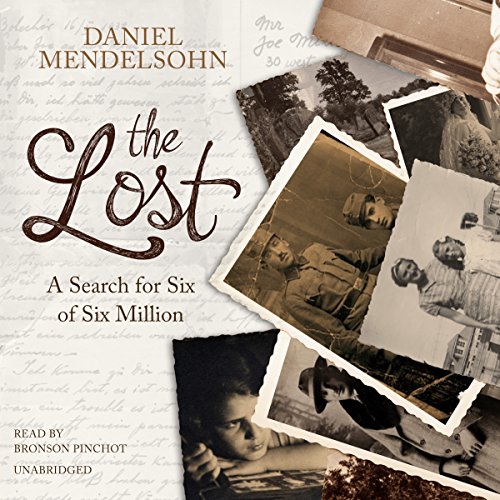 By: Daniel Mendelsohn
Narrated by: Bronson Pinchot
Try for £0.00

In this rich and riveting narrative, a writer's search for the truth behind his family's tragic past in World War II becomes a remarkably original epic - part memoir, part reportage, part mystery, and part scholarly detective work - that brilliantly explores the nature of time and memory, family and history.

The Lost begins as the story of a boy who grew up in a family haunted by the disappearance of six relatives during the Holocaust - an unmentionable subject that gripped his imagination from earliest childhood. Decades later, spurred by the discovery of a cache of desperate letters written to his grandfather in 1939 and tantalized by fragmentary tales of a terrible betrayal, Daniel Mendelsohn sets out to find the remaining eyewitnesses to his relatives' fates. That quest eventually takes him to a dozen countries on four continents and forces him to confront the wrenching discrepancies between the histories we live and the stories we tell. And it leads him, finally, back to the small Ukrainian town where his family's story began and where the solution to a decades-old mystery awaits him.

Deftly moving between past and present, interweaving a world-wandering odyssey with childhood memories of a now-lost generation of immigrant Jews and provocative ruminations on biblical texts and Jewish history, The Lost transforms the story of one family into a profound, morally searching meditation on our fragile hold on the past. Deeply personal, grippingly suspenseful, and beautifully written, this literary tour de force illuminates all that is lost, and found, in the passage of time.

What listeners say about The Lost

Search for the truth

This is an engrossing account of Mr Mendelson's search for lost relatives in the holocaust. It is hard to critic because of the subject matter which at times is truly horrific as would be expected. There are also moments of levity in his wonderful descriptions of elderly Jewish ladies he befriends and help him with his search. One elderly lady in New York who continuely reminds him that his brother is much better looking. However, the digressions into the Torah and Greek tragedy don't really add much to the story and make it rather long winded. There are so many characters and false leads, that is enough to keep up with, the digressions are not needed. It is an incredible story and shows the persistence and endurance that have made an epic, educational and moving read.

An amazing story and education

Listened to the audio book as my chosen format and maybe the long length referred in negative reviews makes the case for listening. Though many of us will never know much at all about our ancestors so brutally killed, Daniel's sharing of his journey brings the truth to us in painful and funny and in educational mixtures so we, too, will feel closer in spirit to family never to be known but always loved. Thanks, Daniel

This book from a man, a scholar and Classicist, who has spent his life looking back, who travels the world to find the stories of his uncle, aunt, wife and four daughters, reads like a memoir, a detective story, a moral fable, even a romance. It is well-paced and engaging to the point that I put my life on hold just to keep finding out: And then what?
Everyone becomes a fully fleshed-out person: the lost; the old man in Poland who remembers, "The whole town was talking about it; the bodies were there the next day;" the woman in Australia who remembers it all but will die if she has to talk on record; all the way to Mendelsohn himself whose memories range from the childlike to the full-blown, in-your-face.
There are what seem to be digressions for stories from the Torah, from history, from Greek tragedies, but all come to a point. The summations are so beautiful, and the relevance so pointed that they are beyond moving. Simply stunning. Simply lovely.
And Pinchot gives voice to it all, the love, the frustration and anguish, the chuckles and joy. No, really, I mean it. This is the most dramatic, most perfectly nuanced performance I've comes across all year. And trust me, I'm an audio-fanatic. I listen to books like it's the air I breathe.
Brilliant book. The re-imagining of what happened to 16 year old Ruchele will make you cry.
And you'll be grateful to bring her to life for at least that moment. Because despite the horror, at least she was breathing.
She was alive.

I was about half way done with this book when I decided to put it aside for a while. This is dangerous because it means I might not ever pick it up again to finish it, but you never know…

The book was not easy to get through. Not because of the difficult subject matter, Holocaust stories and memoirs are never really easy to read, but rather because of the writing style.

The content was great, I have nothing to critique there… and really, how can you critique a person’s personal memories or recollections? I actually found this story more heart-rending than many of the other books I’ve read of the Holocaust. The author really knows how to connect and make the reader contemplate things deeply. He is very skilled at conveying the mood and feel of the scenes, it was very poignant.

My complaint is that the book needed some serious hard-core editing. As good as the narrative may have been, it was so full of tangents and ramblings; it veered off course so many times I found it very difficult to follow.

Another Goodreads reviewer describes it perfectly: “Mendelsohn never used one comma in a sentence where he could insert three or four. I was often lost in sentences wandering through parenthetical phrase after parenthetical phrase until I had to back up and take them out in turn in order to tack the beginning of the sentence onto the end and make some sense of the thing”.

I listened to the audiobook and had the same experience. I didn’t rewind much to gain better clarity because had I done so it would have taken me about a year to get through the book.

When the author stayed put it was interesting, so if you have the patience to slog through the whirlwind more power to you!

Incredible, riveting, depressing as all hell

First of all, the thing to understand about this book, is that it is not a work of fiction. It's not even a historical fiction, i.e. what could have happened if some American Jew went in search of his relatives killed by the Nazis.

It is an actual, factual, detailed report of what happened to the concrete person -- this Mendelsohn -- and his family.

Which does not for a boring reading make. Not only because it's interspersed with philosophy, thoughts on Judaism and its interpreters (both modern and from centuries ago), history, etc. But also because it's an account of human thought, with its fallacies and brilliant deductions, human contact and so on.

It's a very emotional book and is made more so by the brilliant narrator. Pinchot is a genius -- both in intonations, accents (he manages to do a perfect Hebrew, Russian and Yiddish accent sometimes in one sentence) and how he conveys the emotions, etc.

Some readers reported getting lost in this book because of the many clauses and subclauses and sideshows and thoughts etc. What can I say? It's not fiction. You want a simple plot, go read Agatha Christie or Ian Flemming (both of whom I love). Here we deal with human cognition.

An incredible, riveting story read by a master

This story. This story! I read the book years ago and tried to get everyone I knew to read it, but the narration by Bronson Pinchot makes this a masterpiece. This is a story of family, of the Holocaust, of adventure, of memory, of horror, of amazement, of journeys, of tragedy, of redemption. Daniel Mendelson, thank you. You have made my life richer.

This was a truly engaging story. Not just a story though, but stories within stories. So many times, we like the author, think we've learned the last important thing to know, but it is not until the last sentence of the post-script that we truly learn all there is to know. Every word, every sentence has meaning.

The narrator is Bronson Pinchot--outstanding! He brings to life each character and his accents are spot-on! (I had a grandmother from the Ukraine). I think I would not have had the same experience if I had read the book myself, as he smoothly pronounces each "foreign" name and word with such smoothness. Perhaps even more importantly is the genuine emotion he brings to the written word.

This book was an amazing experience!

Beautiful story and so expertly told. I have never been moved so completely as by this narration.

Touching story of a man trying to find details of what happened to his family members during the holocaust. His investigation takes him all over the world to interview others who lived in the area at the time and survived. It is a very touching story. Bronson Pinchot narrated this book beautifully. He's always been good at accents and he puts his skill to good use here.

This was truly the best book I’ve listened to in the many years I’ve been listening to audiobooks. The story was well constructed to keep the listener engaged throughout. The author’s passion for investigating the subject matter made it so compelling. And the performance of the reader was truly extraordinary.

Pinchot's narration is wonderful. I first thought that Mendelsohn himself was reading the book, so personal and engaging was his delivery.
As a German, I was listening with a heavy heart to the fate of his relatives in Bolochov. They all had to face a terrible death at the hand of murderous gang of Nazis and their helpers. Perhaps, those that were shot during the actions were the lucky ones as they were spared the tortures and hunger that was awaiting them.
Jews during most of their history were a persecuted people. They certainly were not the only ones who suffered. However, they now have their own Jewish state, miraculously born out of the holocaust. As long as nation states are necessary to provide a last refuge for persecuted minorities, I will support them.

A fabulous but heartrending account of the search for 6 ancestors who simply disappeared during WWII. It is well structured and well written. Although the Biblical references seem to be a little pedantic and tedious they do make sense and give the listener reason to pause and reflect on how the narrative reflects on them personally.

The reading was superb except for the Australian accent which sounded more Cockney. This distracted me for a while until I realised what it was supposed to be

Any one who is interested in history, WWII, Jewish history or simply family research would appreciate this book