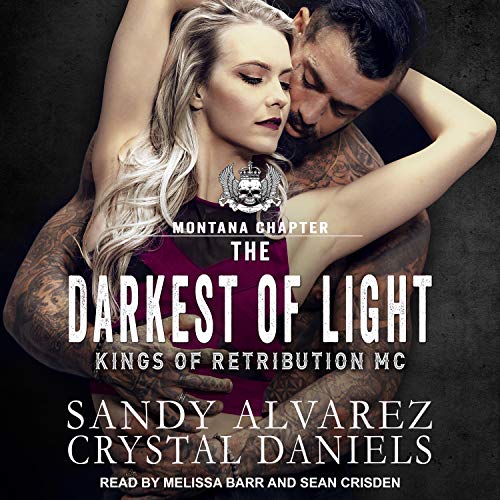 The Darkest of Light

As a young boy, Gabriel Martinez had his family - his entire life - ripped away from him. Revenge and indignation became his means of survival. Several years later, a series of events leads him to his new family, the Kings of Retribution MC, where he meets Alba Jameson.

Heartbreak being the final push, Alba chooses the life her sister worked so hard to give her by going off to college. While trying to bury her feelings for Gabriel, she finds herself faced with the unexpected. Finding strength and courage, she starts to pave her own path in life, until a faceless threat sends her home.

What listeners say about The Darkest of Light

But the story is good only when reading

I do not know where to start the story was interesting and exciting, such action took all the time

In the role of a man when it came to making Gabriel's voice it was a nightmare,
at times I didn't understand anything so strong accent was
Otherwise, I like Sean as a narrator but Gabriel's role doesn't suit him
Melissa was super I enjoyed her presentation

Is it Gabriel or Gabriell???

It may be a little obvious that the narration drove me a bit insane!!! Some of the characters called the H Gabriel and some of them including the h called him Gabriell, this drove me crazy!!! Sean Crisdan was awesome as always, and the female narrator was not to bad.

Now for the story....I actually thought that it had a good premise, but it fell flat. There was not much couple interaction at first, and then they just live each other. I am going to continue on with this series as I am interested in the next 2 characters, but this one was not a winner for me.

I love these two authors, the story was amazing. It had everything I wsnted; alpha male, strong female, sexy Mc men, closely knit extended family, a bqby, good friends, danger, drama and love. What it needed was a better director for the voice actors. I've heard both these voice actors before and they aren't bad but they needed feedback. My biggest note would be for Sean that Mexican and Cuban are not the same. Sometimes he got that and sometimes he didn't. Also for a man who grew up in the states and lived without extended family his accent would have been a bit more subtle. Not to mention its narration, and the listeners need to be able to understand which I could not sometimes. I think with a little bit more feedback this book would have been amazing. I'll probably go back and read on kindle and see if that helps.

Great book and it helps to have some great narrators to bring it alive! These authors are now on my list for MC Audiobooks I will be on the look out for more in the future. I really like MC Club life stories and the thriller in them along with the love and compassion they show for the right women. Especially when they have these action pack parts that make your cringe.. would love to see more of that in these authors books. But I tell you what I am a fan. I can’t wait to hear the stories of Reid and Quin’s stories along with the others! I really hope to hear more of Alba’s college friends stories and Logan’s brother too! Super excited about the upcoming stories of this MC Biker Family!

Absolutely loved this! The readers were perfection 😍 Every book by these lovely ladies is awesome but this was the first Audible for me and I am so glad I got It! Sexy, Brooding Cuban....Yes Please!!

I saw some reviews about the narration but I completely enjoyed both narrators. The story was great with all the things we expect in a MC book. There was biker drama, rescues, sexy romance, and funny in parts, especially Quinn. I can't wait for his book. I'm going to continue with this series because it soooo good.

🌻Gabe’s accent is supposed to be Cuban, lol🌻

Even though the narrator didn’t perform Gabe’s accent, very well, It didn’t take away from the story much.

This book had a way too common plot, in the Romance world, and I was a bit disappointed. The Hero, emotionally destroys the Heroine, for her own good. I really get sick of this theme being used in books. God forbid they have a mature conversation about the possible obstacles, in their relationship.
Of course, he realizes his mistake and, of course, she forgives him, because ugh! Whatever! The rest of the plot is equally as predictable.

I was also dumbfounded by the fact that they left the Heroine’s college roommates issue, unaddressed and unresolved? (Unless I dozed off and missed it) what the heck?

Anyway, it’s an Ok Escape Package listen, however, not worth the cost of a credit to add it to my library permanently.

I liked the story very much but I agree the narration is lacking. This is a book I should have just read.

Love the series/hate the narrators

Female narrator was read her part as though it was a grocery list. I don’t mean to offend Sean Crisden but I find his narration creepy.

Loved it. Kept me listening to see what could happen next. Gabe was so conflicted and set in his way.

story is good.. but not sure why they would change the cover... original cover fit the characters much better. plus it makes it so much more difficult to find the books when covers are changed on audible.