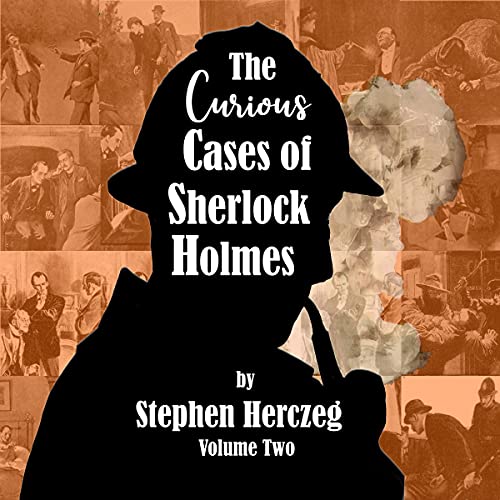 By: Stephen Herczeg
Narrated by: Michael Langan
Try for £0.00

Seven further stories from the pen of emerging pastiche author Stephen Herczeg. Some have appeared in the annals of the MX Series of New Sherlock Holmes stories and the Holmes anthologies of Belanger Books, along with two previously unpublished adventures.

A seemingly innocent concern from Lestrade about his cousin leads Holmes back into a world left behind after the affair of The Five Orange Pips. Investigating the appearance of a body at the base of Tower Bridge unveils a hidden cult of Satanists performing ritual sacrifices, until Holmes and the British Secret Service intervenes. Called to Scotland Yard, Holmes is reunited with an old acquaintance and dragged into a plot to undermine the government and give its secrets to Russian spies. Retirement provides no rest for Holmes when a scout troop discovers a partially buried corpse in the forest. An old friend calls Holmes north to Hull to investigate a seemingly trivial matter of cheating, but one that may cause immense embarrassment to the heir to the throne. Strong familial ties draw Holmes and Watson to Hungary for the funeral of Baron Metzengerstein, only to find that a centuries-old feud between ruling houses ignites once more resulting in death and carnage. An innocent gathering to showcase wares and food from far flung Borneo ends with the mysterious death of the host, and all evidence pointing to a native of that land.

Another great set of Holmes Stories

The Curious Cases of Sherlock Holmes Vol2 by Stephen Herczeg is a wonderful collection of Holmes detective stories. The narration by the talented Michael Langan brings the stories to life.

Another great collection of stories by an author that I didn't knew. I really enjoyed them and yes, maybe they aren't told in a traditional Conan Doyle's voice but they don't need to, they stand by themselves.

I particularly liked the one in which Holmes and Watson travel to Hungary, possibly because there is a connection to the always intriguing Holmes' past :P

I most certainly will be looking more stories by this author.

This was interesting and entertaining to follow along with the sleuth to their conclusions. I enjoyed it. I voluntarily listened to a free copy of this and am giving an honest review. The narrator did a good job.