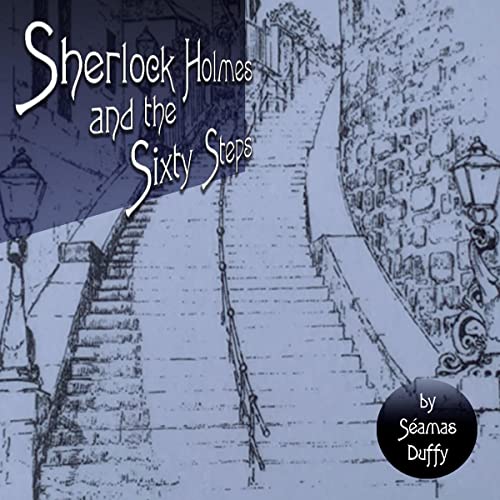 Sherlock Holmes and the Sixty Steps

By: Séamas Duffy
Narrated by: Michael Langan
Try for £0.00

Séamas Duffy’s fourth novel, Sherlock Holmes and the Sixty Steps, follows a similar format to his previously published Holmes collections: a novella together with some shorter stories. The four stories are: “The Tragedy of Langhorne Wyke” (1890); “The Mystery of the Thirteen Bells” (1895); “The Adventure of the Sixty Steps” (1897); and “The Problem of the Coptic Patriarchs” (1898).

“The Tragedy of Langhorne Wyke” sees the detective and his chronicler travel to Yorkshire's North Riding to solve the double murder of a well-heeled but mysterious couple. Holmes and Watson are immediately confronted with the sudden, and ominous, disappearance of the two witnesses to the murder—an elderly widow and her traveling companion. The trail eventually leads back to London and to crimes committed, but unavenged, from Holmes’s past.

In “The Mystery of the Thirteen Bells”, Holmes and Watson, along with Inspector Lestrade, are involved in a grisly treasure hunt of a murder. In a London mired in thick November fog, their footsteps are dogged by a silent unseen adversary as they follow a series of cryptograms which they must decipher. These macabre clues lead them to some of Victorian London’s queerest places, and to one of its most bizarre institutions (which Holmes describes as “a citadel of the mad and the dead”).

In “The Adventure of the Sixty Steps”, Holmes and Watson travel to Glasgow in an attempt to save an innocent man—who has been wrongly convicted of the brutal murder of a rich elderly spinster—from the gallows. Their peregrinations take them into some of the lowest quarters of the city, peopled by shady underworld characters such as “The Moudie”, “Cauld Kale”, and “The Acrobat”. In uncovering a web of police corruption and malpractice, they are perplexed by the enigmatic genealogy of the victim and encounter more than one miscarriage of justice.

“The Problem of the Coptic Patriarchs” (a reference to one of Holmes's unrecorded cases from the canonical “The Adventure of the Retired Colourman”), Inspector Lestrade of the Yard arrives at Baker Street to inform Holmes that the rare and priceless 10th-century Alexandrian Scroll has been stolen and Father Philoxenus of the London Coptic Patriarchate has been kidnapped and ransomed. Holmes and Watson travel to the sleepy Thameside village of Bourne End to unravel the mystery of how the burglar-cum-kidnapper managed to escape from the scene of the crime in the middle of a blizzard without leaving a single trace in the snow.

What listeners say about Sherlock Holmes and the Sixty Steps

A New Collection of Stories

This book contained 4 stories and the Title Story. I found the Stories well written and with referrals to previous Stories actually written by Sir Conan Doyle. Si.e of the Stories are almost a continuation of "The Hounds if the Baskerville" and such. Narrator does a good job with the various characters voices and Storyline.

I really enjoyed this book. Good story and well written. Looking forward to more from this author!!