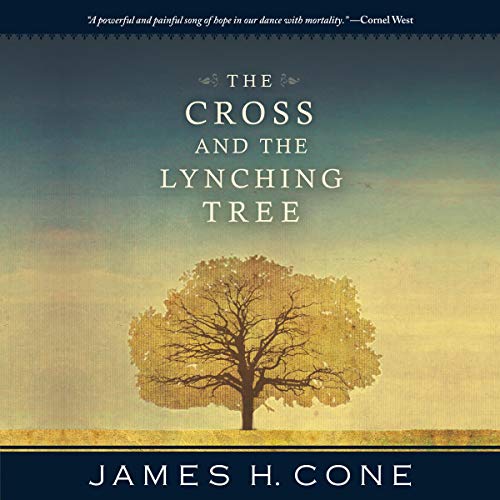 The Cross and the Lynching Tree

The cross and the lynching tree are the two most emotionally charged symbols in the history of the African American community. In this powerful work, theologian James H. Cone explores these symbols and their interconnection in the history and souls of black folk.

What listeners say about The Cross and the Lynching Tree

A brilliant look theologically at the cross and the lynching tree, a hementitical way to contextualize the black experience with such atrocities; I was genuinely unaware of how late lynching went on in america. It's a hard listen but worth it to get a viewpoint.

So sad that I grew up as a Christian and never once in all the church messages I heard did I hear about such an amazing connection about the cross of Jesus’ suffering and the suffering of the lynched black man in America. Truly even I’ve been duped into thinking the only sources for good theology are white men! Wow. I was wrong! It’s time we start learning more from our non-white brothers and sisters about Jesus if we are ever going to see the soul of America revived.

When James H Cone passed a couple of years ago, yet another of the intellectual leaders of the Civil Rights era was lost to us. Cone has pretty much always been controversial, and not just among White Christians. However, Black Liberation theology has been an important movement within modern theology impacting feminist and womanist theology as well as many areas of more traditional theology. Cone was certainly not the only theologian that pointed out the importance of not just Orthodoxy, but Orthodpraxy, but that is one of the important aspects of his work.

One of the significant themes of the Cross and the Lynching Tree is that Christians within the US context have often had orthodox beliefs, but not found it theologically important to address racism, slavery, Jim Crow, lynching or others aspects of justice.

This is a quote from the book, "The Newark and Detroit riots in July 1967 and the assassination of Martin Luther King Jr. in April 1968 were the events that shook me out of my theological complacency, forcing me to realize the bankruptcy of any theology in America that did not engage the religious meaning of the African American struggle for justice. What I studied in graduate school ignored white supremacy and black resistance against it, as if they had nothing to do with the Christian gospel and the discipline of theology." (Kindle Location 227)

The chapter on Reinhold Niebuhr as an example of progressive White theology that was focused on justice, but fell short in matters of racial justice was very helpful both in how Cone critiqued Niebuhr but also how Cone still valued Niebuhr in areas. “When Niebuhr wrote against liberalism, pacifism, communism, and the easy conscience of American churches, he expressed outrage; but when it came to black victims of white supremacy, he expressed none.” (Kindle Location 1517). Cone certainly respects the work that Niebuhr did, Niebuhr and Barth were the foundation of his doctoral work and have been important throughout his career. Cone says, “What Niebuhr said about love, power, and justice helped me to understand that moral suasion alone would never convince whites to relinquish their supremacy over blacks.” (Kindle Location 1556) But…”What I questioned was his limited perspective, as a white man, on the race crisis in America. His theology and ethics needed to be informed from critical reading and dialogue with radical black perspectives.” (Kindle Location 1574)

There is far more to The Cross and the Lynching Tree than I can easily summarize, but these three long quotes at the end of the book are the best summaries of the intent of the book.

"Whites could claim a Christian identity without feeling the need to oppose slavery, segregation, and lynching as a contradiction of the gospel for America. Whether we speak of Jonathan Edwards, Walter Rauschenbusch, or Reinhold Niebuhr as America’s greatest theologian, none of them made the rejection of white supremacy central to their understanding of the gospel. Reinhold Niebuhr could write and preach about the cross with profound theological imagination and say nothing of how the violence of white supremacy invalidated the faith of white churches. It takes a lot of theological blindness to do that, especially since the vigilantes were white Christians who claimed to worship the Jew lynched in Jerusalem. What is invisible to white Christians and their theologians is inescapable to black people. The cross is a reminder that the world is fraught with many contradictions—many lynching trees." (Kindle Location 4559)

"Can the cross redeem the lynching tree? Can the lynching tree liberate the cross and make it real in American history? Those are the questions I have tried to answer. As I see it, the lynching tree frees the cross from the false pieties of well-meaning Christians. When we see the crucifixion as a first-century lynching, we are confronted by the re-enactment of Christ’s suffering in the blood-soaked history of African Americans. Thus, the lynching tree reveals the true religious meaning of the cross for American Christians today. The cross needs the lynching tree to remind Americans of the reality of suffering—to keep the cross from becoming a symbol of abstract, sentimental piety. Before the spectacle of this cross we are called to more than contemplation and adoration. We are faced with a clear challenge: as Latin American liberation theologian Jon Sobrino has put it, “to take the crucified down from the cross.”[10] Yet the lynching tree also needs the cross, without which it becomes simply an abomination. It is the cross that points in the direction of hope, the confidence that there is a dimension to life beyond the reach of the oppressor. “Do not fear those who kill the body, and after that can do nothing more” (Lk 12:4). Though the pain of Jesus’ cross was real, there was also joy and beauty in his cross. This is the great theological paradox that makes the cross impossible to embrace unless one is standing in solidarity with those who are powerless. God’s loving solidarity can transform ugliness—whether Jesus on the cross or a lynched black victim—into beauty, into God’s liberating presence." (Kindle Location 4597)

"In 2005 the U.S. Senate formally apologized for its failure ever to have passed an anti-lynching bill. Did the apology get rid of the hate? What happened to the indifference among white liberal religious leaders that fostered silence in the face of the lynching industry? Where is that indifference today? Did the hate and indifference vanish so that we no longer have to be concerned about them? What happened to the denial of whites who claimed that they did not even know about lynching, even though many blacks were lynched during their adult years? Unless we confront these questions today, hate and silence will continue to define our way of life in America. For “if racial healing is ever to come to our society, it will mean remembering and retelling our story of racial injustice and honoring the voices and the actions of those who stood against it.” (Kindle Location 4648)

We must forever remember the ugliness of Christian and White Supremacy in America!

I like how the author, James Cone, explains how this nation has failed to link the hypocrisy of Christianity and lynching of the African Americans.

I disliked his inability to more fully examine the merits of James Baldwin and others that came to reject Christianity.

I would recommend this book to anyone seeking to be objective about the history of Christianity and Black America, as well as White Americans in genuine pursuit of truth, accountability ,repentance and reform of this nation’s views, laws and treatment of Black people in America.

Stunning narration of a stunning truth Jesus was lynched and that is why God provides present gospel reality for those judicially helpless and legislatively oppressed people like George Floyd. Of course, Jesus in the middle of scandalous sin. What a savior!

I’ve just finished listening to the cross and the lynching tree. I am thankful for Dr. James Cone. I appreciate all the work he has done to clearly articulate the connection between the cross of Jesus and the lynching of descendants of American slaves in the United States. Dr. Cone exposes the theological blindness of White theologians who were highly influenced by white supremacy to the point that they could not see the connection between Jesus the Christ in the recrucified descendants of American slaves, black people in America. Dr. Cone.Does an excellent job describing the role of women in the black liberation movement. He also addresses his critics regarding the suffering of Jesus being redemptive. Dr. Cone ends his book with hope for the destiny of the brothers and sisters of white and black America becoming one example of God’s love. What God has put together let no man put asunder.

A MUST READ for anyone in America who follows the ways of Jesus and desires racial reconciliation in our nation. Finished it last week, and from the opening pages, you know that this will be thought-altering. I only regret that I did not read it sooner.

James Cone is a brilliant theologian. It is not a wonder that my seminary professors gave no space for liberation theology or these profound thinkers. Cone's work, had it been required reading, would have transformed the pastoral development of the entire body of students. Our eyes would have been opened to the reality of the lynching tree & the work that really needed to be done within and outside the walls of our churches.

I listened to this book on Alexa, my phone, and in my daily until I finished it. The history is informative, exuberant, and liberating. I would recommend this book to preachers and people who want to better understand the meaning of the cross for black people.

Most memorable quotes of Fannie L.Hammer; the dialect of slaves in comparison to the disciples all to clarify how purity of a cross on one's neck is similar to another's identity with oppression against a desire for legitimization unlike Whiyes and Roman's desire for power.

I wish my own faith were so strong and ran as deep. I stand condemned!

I love how this was written. It's a beautiful explanation of how God is always faithful!