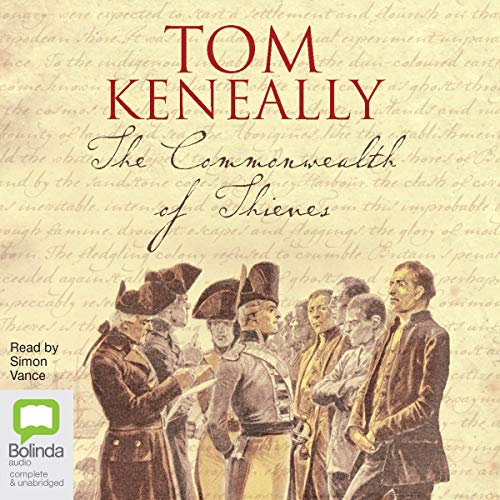 The Commonwealth of Thieves

By: Thomas Keneally
Narrated by: Simon Vance
Try for £0.00

A lively history of the 'First Fleet' which took convicts from Britain to Australia in 1787; Sydney's early years as 'an open-air prison'; and the colonisation of New South Wales.

The story of modern Australia begins in 18th-century Britain, where people were hanged for petty offences but crime was rife and the gaols were bursting. From this situation was born the Sydney experiment, with criminals perceived to be damaging British society transported to Sydney, an 'open air prison with walls 14,000 miles thick'.

Eleven ships were dispatched in 1781 and arrived in Australia after eight hellish months at sea. Tom Keneally describes the first four years of the 'thief colony' and how, despite the escapes, the floggings, the murders and the rebellions, it survived against the odds to create a culture which would never have been tolerated in its homeland but which, in Australia, became part of the identity of a new and audacious nation.

What listeners say about The Commonwealth of Thieves

Probably the best book for me to date about the criminal colony in Australia. Between it and The fatal shore.

I appreciate books, I can learn something from.
I also like the books about history but written like a story, not like a lecture. This book has both of above and good narrator makes the things only better.

What a good listen, thoroughly enjoyed it and will look for further Keneally books to listen to.

A superb history, very well researched and excellently read. I will read this again and again. Highly recommended.