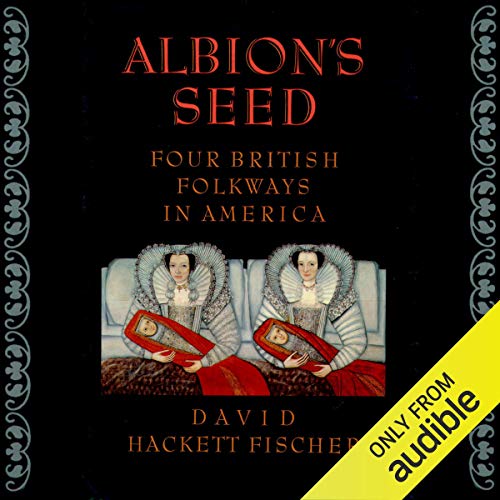 By: David Hackett Fischer
Narrated by: Julian Elfer
Try for £0.00

This fascinating audiobook is the first volume in a projected cultural history of the United States, from the earliest English settlements to our own time. It is a history of American folkways as they have changed through time, and it argues a thesis about the importance for the United States of having been British in its cultural origins.

While most people in the United States today have no British ancestors, they have assimilated regional cultures which were created by British colonists, even while preserving ethnic identities at the same time. In this sense, nearly all Americans are "Albion's Seed," no matter what their ethnicity may be. The concluding section of this remarkable audiobook explores the ways that regional cultures have continued to dominate national politics from 1789 to 1988, and still help to shape attitudes toward education, government, gender, and violence, on which differences between American regions are greater than between European nations.

What listeners say about Albion's Seed

I loved this book in written form, and audio backs it up. A groundbreaking theory of how British culture is planted in current USA based on immigration roots over 400 years ago. Very very good if you like cultural studies, history, geography. Applicable to British and American readers. It is serious scholarship and detail oriented (food ways, language, clothing, politics, etc) but well worth it and a good listen.

Fantastic read - very insightful and easy to digest. Well written and worth spending the time on.

Great book. Explains the power of culture and its enduring impact through centuries. I highly recommend this book.

Would you consider the audio edition of Albion's Seed to be better than the print version?

Definitely, both because of its sheer length and its analysis of local dialects.

How thorough, deep, erudite and enlightening it is.

A must read for anyone interested in American history, culture and civilisation.

This is great, much more than title suggests

Would you consider the audio edition of Albion's Seed to be better than the print version?

The narrator was great and when it came to comparing accents and usage of words listening was better than reading.

What was one of the most memorable moments of Albion's Seed?

So much history that I never understood. The first British settlers shaped the USA as it is now in everything from cooking to the Presidents. This book brings history alive.

Not so much a scene, but I did enjoy reading of the marriage customs in the different parts of hte country.

No. It isn't that kind of book. I had a lot of moments of "that's where that came from."

This book makes the early years of American History so easy to understand. The time before Independence is explained and the reasons for later history up to the modern day make sense when these basic differences of early settlement regions are understood.

This is a new way of looking at history and makes much more sense than Wars, Generals and Regimes - it looks at a whole society and how it functions. It's probably not for everyone because it is scholarly, using the primary source material of comparative folklore, but the overall themes should be shared with everyone, perhaps even in secondary school texts, because it makes the mixture of people in the US much easier to understand. There were four areas in England from which the early settlers care, and we evolved from those cultures, even us latecomers. We adopted the ethics and habits of either the Puritians (northeast), Quakers (mid-Atlantic), aristocracy (south) or northern (Scottish/Irish) borderers (rural mid-south). If this type of history becomes common, we can see how all cultures contributed to America.

Albion's Seed: Wow So much information in one book

Would you listen to Albion's Seed again? Why?

Yes I will listen to this book again there is so much information to take in it can't be done in one reading; However the vast amount of information and origins of folk practices we still do to this day, and don't know why, are fascinating. The wedding customs are a riot and some downright wacky .... but it gets very serious in places... I have had "Bound Away In my wish list for a very long time reading the reviews many said to read "Albion's Seed" first so I did.
But first I started with" How the West Won The Neglected Story of the Triumph of Modernity" (Unabridged) <--- Very true it's not about Cowboys and Indians

What was one of the most memorable moments of Albion's Seed?

Well I'll tell you I just never could see how easily the North could fight a war with the South, but it turns out that they pretty much hated each other already over drastically different religious beliefs and it probably was not that hard to kick off!

The wedding traditions because they were funny.(most but not all)

Well you might want to but I'm not sure you can it gets intense at times; However I did repeat chapters and noted chapters I want to listen to again! I will listen to it as a whole again.

This author paints a very good scene, it is easy to imagine (if you have an inner eye) seeing our American ancestors and how they lived. Some things are very shocking considering how we were taught they behaved. Sometimes draggy but just about the time you say Oh Geezz... I'm reaching for the fast forward... a whole new can of worms pops out and your glad you didn't. This book leaves no doubt that this country was founded on differing Christian religious beliefs, strictly Christian. Even if not all were not very Christ like ....

Sorry this review but the book is 39 hrs long

The first couple hours are a little slow. After the beginning it becomes very good. I am a history buff, but had never looked at American and British history from this perspective. I really learned a lot and enjoyed it tremendously.

An excellent analysis of regional basis & differences of our British roots. The last chapter culminates in explanation of changes in parties & politics which is relevant to today's changes & party switching.

Well-thought, well-researched, well-expressed, and well-read. Lovers of history will enjoy immensely. Very intriguing reading during and following the 2016 election; the section at the end charting and explaining shifts of regional loyalty in presidential elections was particularly fascinating.

Why is this being read by an Englishman?

I am loving hearing about all these New England towns, but I keep getting tripped up with the reader using the English (and not even the East Anglican) pronunciations of the towns. I mean, it's kinda the point of the book!

Detailed Look at the Origins of American Culture

A captivating study of the cultural origins of the US by examining the four largest groups making up the major migrations from England to North America up until 1775. Albion’s Seed is systematic and detailed, relying on both data and examination of particular accounts. Each of the origin cultures are described by their vocabulary and speech, the way they educate and raise their children, how they socialize and entertain themselves, and how they moralize and approach justice. As often as not, it creates a picture of four opposing sets of beliefs and methods. Most of what I knew about the puritans before this was cartoonishly inaccurate and I knew even less about the other three groups, the Cavaliers, the Society of Friends, and the "Scotch-Irish"/border people. It adds color and context to a period of American history that is often relegated to a paragraph at best in many books on early US history.

How to understand American Politics!

This book should be called: How to understand American Politics!

David Hackett Fischer illustrates the foundation of the America Nation through the personality and culture of the British immigrants that settled it. Understanding these pockets of immigrants and the corresponding culture and religion they brought with them, helped me understand the cultures within the United States today. Most of the core beliefs, tenants and attitudes are still alive and well and impacting our daily lives. They are particularly apparent in politics. It is a wonderful book! Reading it will give you a deeper understanding about America, while illustrating how immigrants - from anywhere, during any decade - are influential to building and reshaping of America. It has been that way since its inception.