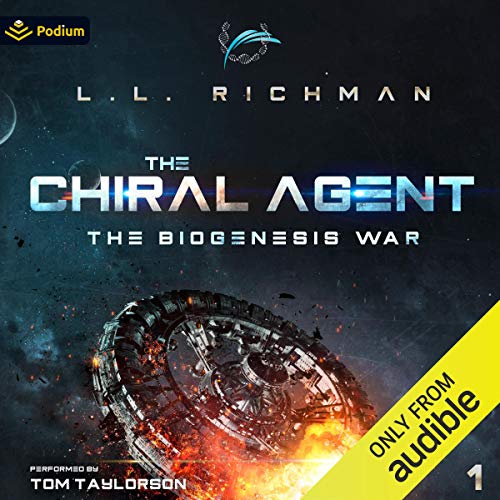 They stole his identity. Now they want him dead.

Shadow Recon pilot Micah Case has flown into enemy space countless times. But when his spacecraft disintegrates around him above an alien world, Micah awakens with no memory of his past and a mysterious voice inside his head. His genetic code contains the power to destroy all life.

Hunted by his own military for reasons yet unclear, Micah embarks on a desperate journey to find the unknown voice. What he discovers sends him racing against the clock to stop an Akkadian assassin. If he fails, it's not the end of the world. It's the end of humanity.

What listeners say about The Chiral Agent

really good series only spoiled by mediocre control over the English language. Writing skill level akin to a reasonably skilled school pupil... but the story and pace help to rescue.
I enjoyed listening but it's tough to get through after you have listened to a great author

Would have made a good short story or functional outline of a book.

Readers of hard sci fi are greedy. They want to have the science served up to them in compelling & entertaining ways. They also want great characters who will develop in expected and unexpected ways.

This book has some of the science, a reasonable concept, some promising action and little else.

You don’t get a feeling of individual characters who are well defined, or you can differentiate between, they don’t develop and you remain indifferent to their fate throughout the story from beginning to the end.

Military Hard SCI-Fi at its finest!!

Lisa Richman takes Military SCI-Fi to a new level!! A different type of a combo of Hard SCI-Fi with a realistic take on the future of the way a Tier one Special Operations Team will work…I am a retired Special Operator and the way the author leads us up and down the halls of a Spec Ops team in action is reminiscent of how they work now yet she elevates it to a higher level…I can clearly see how this would play out in a future scenario. Absolutely spot on military acronyms and chains of command, a comparison to the way SOAR and Delta work together to achieve an objective. Very well done in the area of Space Adventure combined with a spy thriller reminiscent of Vince Flynn. Excellent world building and top notch character development. You’ll lose sleep over this one, then add in the interesting genetic component and you’ll be thinking about this well after you read it. Great Physics including one of the holy grails of science, Quantum Entaglement! This hits on every level and is utterly visceral…you don’t wanna miss this…
R.Ballon, SGM (R) ACE

nice title but has little to do with the story

There is no Chiral Agent in this book or the next. Also, if there is a Biogenesis War going on, nobody in the first two books knows about it.

The story is at its best in the beginning when the reader is not sure what's going on, but stretches keeping the main character ignorant for way too long. After that proceeds on a predictable path. It's a set up for future adventures with almost every single character introduced in this book or the accompanying prequel novella.

Taylorson's narration is serviceable but in no way outstanding.

A fantastic book and narration! I need more!

This was a really fun novel to listen to! The narrator Tom Taylorson was spot on, giving a stellar performance! This is only the second time that I've had the pleasure of listening to Tom but now he's definitely one of my favorite narrators (I'll be on the look out for more of his work.)
Anyway as other reviews have pointed out the book starts out a little slow, but it quickly picks up speed and once it's really moving, oh-boy-howdy, the action and tension mount fast enough to make your head spin.
The book has a fantastic group of characters and some doppelgangers which includes a couple of panthers (oh my,😮) in a tight character driven plot, and there's even a few pop culture references thrown in to give you a smile!
So you're definitely gonna want this Military Scifi Thriller in your library!

The Chiral Conspiracy by LL Richman

This was a surprise bonus novella attached at the end of Chiral Agent... A prequel that laid a little bit of ground work for the series! But having just read the Chiral Agent the mystery was kinda gone ... (spoiler: we know who the antagonists are) but the story was good, and watching it play out was such fun that I really didn't mind the slightly odd sequencing of the books! I was simply happy to find this nice gift waiting for me, as I wasn't quite ready to leave LL Richman's imaginerium behind!
And Tom Taylorson narration was pretty terrifical too!