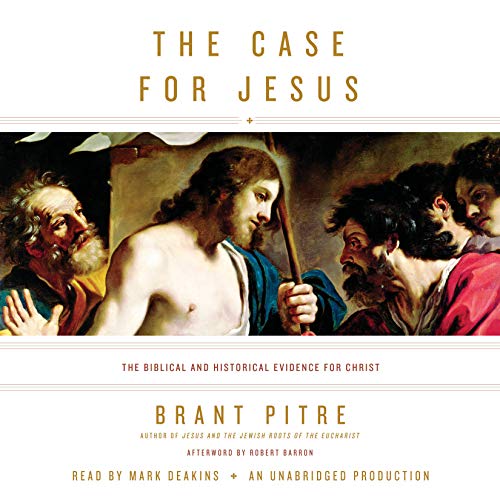 The Case for Jesus

Over the past hundred years, scholars have attacked the historical truth of the Gospels and argued that they were originally anonymous and filled with contradictions. In The Case for Jesus, Brant Pitre taps in to the wells of Christian scripture, history, and tradition to ask and answer a number of different questions, including: If we don't know who wrote the Gospels, how can we trust them? How are the four Gospels different from other Gospels, such as the lost Gospel of "Q" and the Gospel of Thomas? How can the four Gospels be historically true when there are differences between them? How much faith should be put into these writings?

As The Case for Jesus will show, recent discoveries in New Testament scholarship as well as neglected evidence from ancient manuscripts and the early church fathers together have the potential to pull the rug out from under a century of skepticism toward the apostolic authorship and historical truth of the traditional Gospels.

"I've lost count how many times I've heard critics say the Gospels are late, anonymous, and untrustworthy sources that don't prove the divinity of Christ. At last there is a book that refutes these claims with scholarly rigor while still being an enjoyable read for lay persons." (Trent Horn, author of Answering Atheism)

What listeners say about The Case for Jesus

This book needs to be read by the new Atheists, practicing Catholics, lapsed Catholics, all Christians, and everyone who might doubt the divinity of Christ!

A refreshing look at the best story ever told.

Dr Pitre illustrates how being familiar with the thoughts and customs of a 1st century Jew's we are able to explore with greater depth and awe the beautiful and transformative messages of Jesus Christ.

Wonderful - a great book for all searchers.

A brilliant book that grapples with the historical authenticity of the Gospels, their veracity and the historical person of Jesus Christ. Whether you are searching for answers or just curious, this is definitely worth listening to. It shows just how solid the basis for Christianity is. Learn about Jesus here but the invitation to believe in Him and grow in that relationship is left up to the reader.

A beautiful apologetic about the Case for Jesus. I especially loved the parts about the Transfiguration and the arguments against supposed anonymous gospels.

inspired and God filled- i found myself welling up under conviction of the Holy Spirit, this book is a must for Catholics. it gives great historical, factual evidence & Old Testament proof the Jesus is the Son of God

Case made and proved

What an incredible book. i have read several apologetics books and this book has revealed things I have not read elsewhere. It has opened my eyes and esrs to stories I thought I knew. Incredible. Highly recommended

An solid piece of great scholarly work written in an intelligible and passionate language by this brilliant professor.

A must read for all Catholics, heretics and inquisitive sceptics alike.

Brant Pitre, among other points, explains why Bart Ehrman, in his book "How Jesus Became God" is simply incorrect in most cases. Ehrman misunderstands basic premises of the Gospels and the Old Testament. One does not have to be a scholar to enjoy this book! (Although familiarity with scripture would make this book much more valuable to the listener/reader)

Full of great insights about Jesus and the Bible, highly recommend. Whether you are a Christian or not I think you will find Pitre's presentation of the subject fair, scholarly, yet approachable. He makes a surprisingly convincing case for the historicity of the gospels and Jesus claims to be Devine. The insights into 1st century Judaism make it valuable even if you have know doubts as to who Jesus was.

Would you listen to The Case for Jesus again? Why?

Yes, I plan to. This book is such a treasure-house of information and discovery.

What other book might you compare The Case for Jesus to and why?

Perhaps another story--like Indiana Jones. I'm not kidding. This book has a kind of thrill to it that feels like your on the hunt for treasure. You find it in the truths he describes in Scripture. Excellent.

Yes it certainly was.

Gives solid evidence to why some modern biblical scholars are completely wrong on their dating of when the gospels were written. Answers the tough questions on why we should believe that the Bible is accurate.

How could anyone argue after listening to this? His evidence is so compelling and thorough. Anyone doubting their Faith should listen to this!

Wow! Outstanding presentation; a must read for all Christians and non-believers. Concise and well organized book.

Brant Pitre has written a thoughtful and well researched examination of the case for Christ's Divinity and Messiahship. He effortlessly debunks the hypotheses put forth by many atheist New Testament Scholars , as well as those who are academically irresponsible or lazy.

This book was so very informative, powerful and backed up everything said with in depth knowledge of history. The reader was very enthusiastic and easy to listen to.

I really enjoy this book

This book answered many of my questions. Jesus divinity, his claim of who he is in the synoptic gospels, etc.
Will read and listen more of Dr Brant Pitre.

I have learned a lot with this book. I have enjoyed it very much. The information is clear and easy to follow.