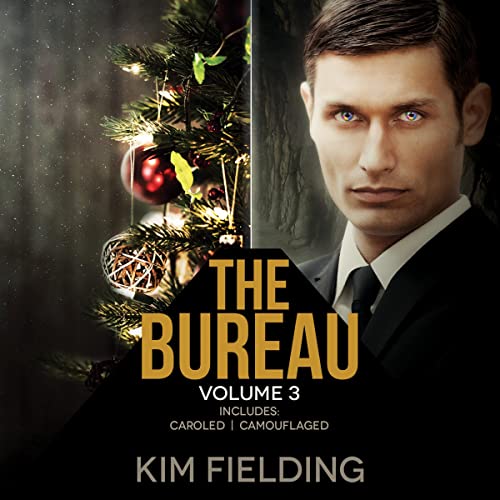 By: Kim Fielding
Narrated by: Joel Leslie
Try for £0.00

This collection contains the seventh and eighth Bureau stories:

Charles Grimes hasn’t celebrated Christmas in years, so spending December in San Francisco while keeping an eye out for monsters sounds like an easy way to earn a few bucks. He should have learned by now that nothing is ever easy—not his job, not his existence as the son of an angel, and not his relationship with a formerly captive demon. It’s going to take more than a few rounds of Jingle Bells to make Charles feel the joys of the season.

Ever since Ralph Crespo was trapped in human form, he’s been going through the motions at a job he once loved. Maybe that’s why the Bureau chief seems to have demoted him to messenger. But this time a letter delivery allows Ralph to meet Anton Steinmann, and Ralph’s life takes a turn toward the unexpected.

Anton loves his remote home with its extensive caves. He’s less fond of his leadership position, however, and definitely doesn’t want the offer Agent Crespo hands him. Then Anton is kidnapped and tortured. Someone wants him dead, and he doesn’t know why.

How can anyone be true to himself in a world where he doesn’t really belong? Perhaps Ralph and Anton can find the answer together—if they survive long enough.

What listeners say about The Bureau: Volume 3

I adored this audiobook double feature performed by the one and only, Joel Leslie!

Camouflaged:
1968
A dragon and a gnome
In a cave
A kidnapping and torture
A rescue
A betrayal
An HEA

You don’t need to read/listen to these in order to enjoy them!!

Caroled:
📖 Story comment: entertaining, familiar characters, easy pace
The story brings the 'holiday spirit' to Grimes & Tenrael - Happy Hanukah -
Given the heaviness of this series, it was nice to have a volume with a lighter feel. At a stretch I'd call it "cute" - if that word can be used in relation to the Bureau universe!

Camouflaged:
📖 Story comment: interesting plot, likeable characters, good pace.
I really liked the way Kim Fielding broke my preconceptions on the type of being Anton is ... what can I say, blame it on Disney and the lawn ornaments 😂. Although not as dark and gritty as some of the other Bureau stories, I still enjoyed its worldbuilding and the mystery of the case.

🎧 Narrator comment: Joel Leslie does a stellar performance capturing the "noir feel" of this series. His ability to capture each character's personality brings Kim Fielding's world vividly to life and I look forward to further instalments.